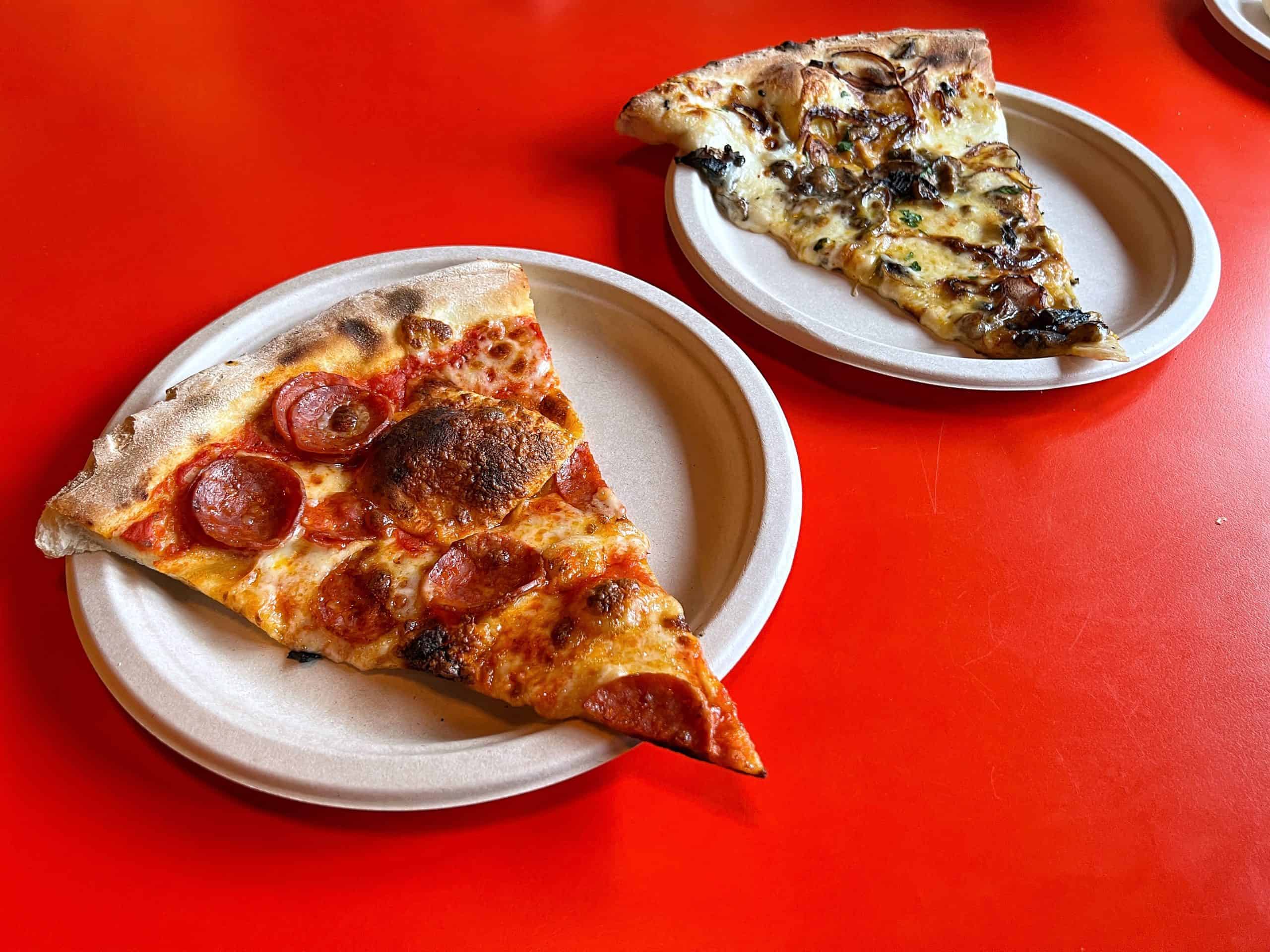 With the term first recorded during the 10th century, pizza has become one of the world’s most popular fast foods. Though the term was invented in Gaeta, Lazio; Naples is widely considered the home of the version that’s most well-known today. Neapolitan pizza was even registered a Traditional Specialty Guaranteed dish by the European Union in 2009, by request of Italy. Though traditionally Italian, few other foods have received such international acclaim. In New York, the borough of Manhattan has more than 360 establishments serving by the slice, plus countless others. Here in the UK, we’ve come a long way from Pizza Hut, Domino’s and Pizza Express – with authentic Italian pizza now more accessible than ever, with the addition of some regional American styles. From strictly authentic two topping pizzerias, to less traditional outlets with fancy, new-fangled bells and whistles: these pizzerias are currently serving the best pizza in London.

Following the success of founders Kate and Jim’s pop-up pizza parties, Rudy’s first site opened in Ancoats, Manchester, during 2015. Now one of the most popular pizzerias in Manchester, a Rudy’s site has since opened in London, bringing classic Neapolitan style pizza to Soho. With pizza bases made daily using Caputo ’00’ flour and left to ferment for at least 24 hours, the pizzas are topped with sauce made from San Marzano tomatoes grown next to Mount Vesuvius and fresh Fior di Latte mozzarella direct from Naples. The pizzas are then quickly cooked for 60 seconds in stone ovens. A wide range of flavors are available, but in true Neapolitan fashion the Margherita is an absolute benchmark.

Further information on Rudy’s Neapolitan Pizza can be found here.

At Voodoo Ray’s, huge 22-inch pizzas are the main draw, all available with a wide selection of toppings. But even better is the fact that Voodoo Ray’s, with outposts in Dalston and Peckham (plus Manchester), also serve their pizzas by the slice, thus making them a perfect stop off if you plan on visiting more than one pizzeria in one hit (a pizza crawl, if you will). Regardless of whether you choose to tuck into a whole pizza, or just a couple of slices, pick from the likes of classic Margherita (a vegan version is also available); Hot Spot with ‘Nduja sausage, mascarpone, mozzarella and honey; Shrooms II with mushrooms, taleggio, mozzarella, red onion and butternut squash; or Giorgio Moroder topped with goat’s cheese, sun blushed tomatoes, courgette, basil, mozzarella and tomato sauce.

Further information on Voodoo Ray’s can be found here.

With shops in north, east and south London, Yard Sale Pizza especially excels with its dough, made on site, hand-stretched and baked in a custom-built dough oven to produce a base with a springy, blistered crust. Available in two sizes, 12 or 18 inches, various toppings are available, but when the produce and base components are this good, it’s worth ordering a Margherita to avoid being overwhelmed. Otherwise, the much loved Holy Pepperoni dials the classic topping up to 11 with regular pepperoni joined by smoky gyula pepperoni and spicy ‘Nduja; while The Aubergine simply comprises a holy trinity of garlic roasted aubergine, parmesan crumb and fresh basil.

Further information on Yard Sale Pizza can be found here.

Formerly at The Crown in Greenwich, Wandercrust has moved down the road to The Pelton Arms – one of Greenwich’s best kept secrets. Honoring the traditions of Naples, Wandercrust uses traditional techniques to make and bake its dough, which is blasted In a classic woodfired oven. Naturally the Margherita is exemplary, while the American Psycho has a nuanced balance of complementary flavors with a welcome whack of heat from Roquito peppers and moon chilli honey which join Ventricina salami, fior di latte mozzarella and a superlative tomato sauce.

Further information on Wandercrust can be found here.

For years, London’s pizza scene has been dominated by Italian styles, with the occasional American-style pizzeria thrown in for good measure. Yet unlike New York-style pizza, Detroit-style pizza is relatively uncommon in London. Neil Rankin road tested the style at Temper in Covent Garden upon opening, but without much success.

Initially launched as a delivery and takeaway operation, the simply named Detroit Pizza has opened a permanent site on Commercial Street, between Bubala and Old Spitalfields Market, using authentic Detroit blue steel pans to bake their thick, pillowy pizzas with caramelized cheese edges. Many pizza purists will shudder at the thought of Detroit Pizza’s pies, but it’s so far removed from the traditional pizza of Naples, it’s in its own entire category. So there’s really no need to get the pitchforks out. With the cheese placed under the sauce and toppings, pepperoni and a standard tomato sauce pizza are available by the slice, while other concoctions feature outrageous toppings such as the Bacon Double Cheeseburger or the New Forest with cacio e pepe white sauce, mushrooms, baby potatoes , rosemary and parmesan.

Further information on Detroit Pizza can be found here.

During 2011, Pizza Pilgrims founders James Elliot and brother Thom, ditched their desk jobs and embarked on a pilgrimage to Italy to discover the true art of pizza making. Returning to the UK six weeks later, the pair installed a traditional stone oven in their ‘Pilgrims’ van and set up a stall on Berwick Street, Soho.

More than a decade has since passed and Pizza Pilgrims has become one of London’s most popular pizzerias with 16 sites in London (plus one in Oxford). Here, the pizza dough is the brothers’ forte; cooked over a wood-fire and tanned with air pockets around the crust. A number of white and tomato bases are available, with toppings such as aubergine parm; mushroom and truffle; and pepperoni with chilli-spiked honey. The real demonstration of Pizza Pilgrims’ superlative dough, however, is the cheese-free Marinara, simply consisting of basil-infused tomato sauce, oregano and garlic. Pizza Pilgrims also serve their pizzas at Swingers, London’s premiere crazy golf destination, in the city and West End.

Further information on Pizza Pilgrims can be found here.

Starting life in the courtyard of London Fields Brewery, Homeslice now has various restaurants operating across London, serving a selection of 20-inch pizzas and nothing else besides sides and dessert. Wine is served in tumblers – like in The Godfather films – and pizzas are served on paper plates. The colossal slices are far less evocative of children’s Birthday parties than the plates suggest, however.

Every ball of dough is made in-house using high protein German 405 flour, aged for at least 24 hours and cooked within the restaurant’s own custom-built, wood fired oven. All of the sauces are also made in house, and cheese is sourced from both Neal’s Yard and Naples. Toppings change regularly, but might include the likes of ‘Nduja with tenderstem broccoli and garlic and chilli oil; chorizo ​​with coriander and a creamed corn base; or spiced lamb with savoy cabbage and sumac yogurt. It’s also possible to order pizzas with half-and-half toppings, ideal for sharing.

Further information on Homeslice can be found here.

Pasta and Pizza at Eataly, City

Opened in London during the spring of 2021, Eataly is touted as London’s premier destination for the best in taste and craftmanship of high-quality Italian food and produce. Joining more than 40 Eataly stores in 16 different countries, the London branch occupies a huge space next to Liverpool Street Station, acting as a huge marketplace for Italian food and drink, also offering hot food to go and a selection of sit-down restaurants. Showcasing traditional wood-fired pies and classic pasta dishes, Pasta e Pizza serves pizzas made using dough leavened for 50 hours in total. A number of over-the-top specials are available alongside some more classic options, but it’s the Margherita that’s the jewel in the menu’s proverbial crown: a gorgeously imperfect wheel of blistered crust topped with a lightly sweet tomato sauce, fior di latte mozzarella, fresh basil leaves and just a drizzle of extra virgin olive oil.

Further information on Eataly can be found here.

Another pizzeria offering its pies by the slice, Mike’s is a relative newcomer to London’s pizza scene, opened in the spring of 2021. From a site in Copeland Park, just behind the Bussey Building, Mike’s was brought to the city from the team behind Frank’s Café and the Camberwell Arms, serving what’s described as ‘London-style pizza’. Here, the springy focaccia-esque bases are loaded with slightly avante-garde toppings, including the likes of potato, mushrooms, almond and truffle fonduta; salsa verde, piquillo peppers and tuna; or potato, Tuscan sausage, red pepper sauce and pecorino.

Further information on Mike’s can be found here.

With sites at Boxpark in both Shoreditch and Croydon, plus three in Brighton & Hove, Fatto a Mano uses dough that’s made in house each day, proved for at least 24 hours to minimize yeast quantities, ultimately making the crusts light and easy to digest. Pizzas are cooked Neapolitan style at high heat for around 90 seconds, and topped with a wide variety of options, using Italian and local British ingredients. Interesting concoctions include the likes of vegan ‘Nduja, sausage and friarielli, or five cheese, but the Margherita is the real way forward here.

Further information on Fatto a Mano can be found here.

Today, Franco Manca is arguably the most ubiquitous pizzeria on the list with over 40 sites in London alone (plus others around the country, and one in Athens). Unlike most big chains, however, the pizza at Franco Manco is quite consistent. Sure, it’s not the most revolutionary but there’s plenty of comfort to be found in the Neapolitan style pies. The classic toppings are just fine, but the regularly changing specials are absolute standouts. Think Neapolitan ragù as a pizza topping, smoked beechwood salami with caramelized red onions and homemade chilli oil, or roasted potatoes and onions with stilton, pesto and a light tomato base.

Further information on Franco Manca can be found here.