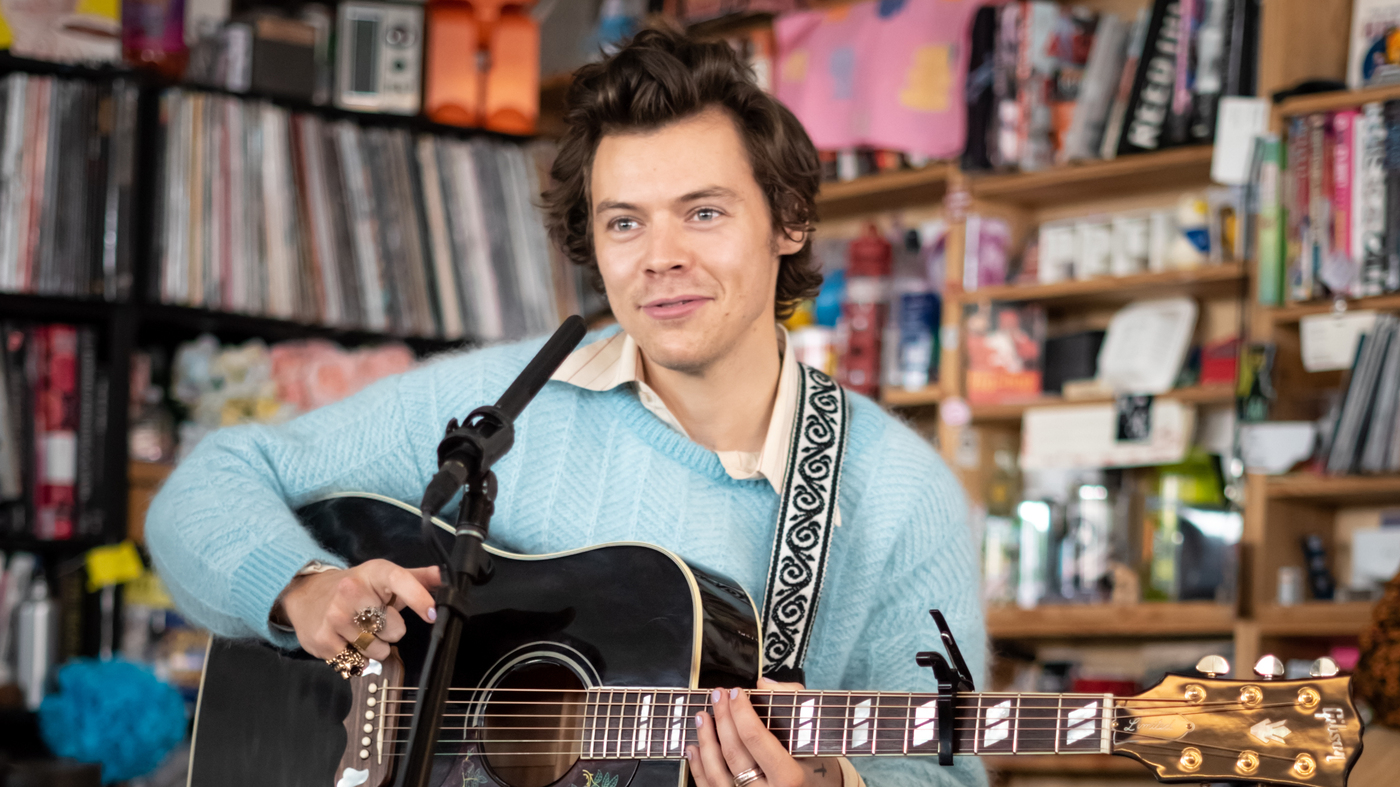 Harry Styles performs at a Tiny Desk Concert in 2020. He’ll soon be the subject of a course at Texas State University.

Harry Styles performs at a Tiny Desk Concert in 2020. He’ll soon be the subject of a course at Texas State University.

A new college history course at Texas State University will focus on Harry Styles and the culture of celebrity. Starting next spring, roughly 20 lucky undergraduate students will get to learn how — as the pop star so famously put it — “it’s not the same as it was.”

Louie Dean Valencia, a professor of digital history and a longtime Styles fan, announced on Twitter over the weekend that the university’s honors college had approved his course, “Harry Styles and the Cult of Celebrity: Identity, the Internet and European Pop Culture,” for the spring of 2023.

That post has since racked up more than 10,000 likes, inspired coverage from media outlets around the world and prompted, in Valencia’s estimation, hundreds of messages.

“If nothing else, the fact that this course has gotten so much global attention means maybe I know *something* about how celebrity culture works,” he later tweeted. “I want students to not just learn about contemporary history, but hard skills they can use! Like how to manage a social media campaign!”

A flyer for the course says it will focus on Styles and popular European culture to better understand the cultural and political development of the modern celebrity, covering a range of topics including gender and sexuality, internet culture, media, class and consumerism. Students will practice evaluating sources, sharpen their visual and auditory analysis and learn technical skills such as audio editing as they work towards their final project, a podcast.

Valencia’s own work focuses mostly on countercultures, specifically fascist and anti-fascist youth cultures in 20th century Europe. But he had to put his research — most recently, a comparative history of HIV/AIDS across European cities — on hold when the coronavirus pandemic struck.

Valencia tells NPR in a phone interview that he started two new projects during his locked-down summer of 2020: learning the electric guitar, and writing a book about how the world has changed over the last decade through the lens of Styles. Two years later, he’s made measurable progress.

“As my guitar instructor would happily say, if you record me and then speed it up times two, it almost sounds like a normal song,” Valencia says and laughs. “As far as the book, it’s very close to completion.”

He’s ending the book with a chapter comparing the scenes and experiences at different Styles concerts, and still has a few more on his calendar — one in Madrid next week, three in Austin in the fall. Plus, Valencia says he may have to add another chapter about the events of the last week, adding that “it may get a little meta in the end.”

The research Valencia has done for his book — as well as his personal proclivity for One Direction and Styles — helped him shape the direction (no pun intended) of the class. But as he explains, the process of planning, developing and getting approval wasn’t exactly straightforward.

Valencia poses for a selfie at London’s Victoria and Albert museum in London, where an exhibit featured the colorful Styles cardigan that inspired a craze during the pandemic.

Valencia poses for a selfie at London’s Victoria and Albert museum in London, where an exhibit featured the colorful Styles cardigan that inspired a craze during the pandemic.

He hatched and developed the idea during the pandemic

Valencia is eager to talk about his own love of Styles’ music, and the role it’s played in his own personal and professional life.

He was working on his Ph.D. from 2010 to 2016, the exact years that One Direction was active (not to mention a worldwide sensation). As a historian of fascism often working with dark material, Valencia says he appreciated the band’s uplifting music and feel-good environment at its concerts. Valencia then took a one-year teaching position at Harvard in 2017 — exactly as Styles’ solo career was ramping up.

“As I was getting my own legs, seeing how he was developing as an artist, as a person wanting to be taken seriously, maybe, in a world that doesn’t necessarily always feel like it’s welcoming to you … I think when he went off as a solo artist it particularly resonated with me in a lot of ways,” he recalls.

Valencia had been teaching at Texas State for several years when the pandemic hit. He first taught completely remotely and then in a masked, socially distanced classroom, which he says made it hard to connect with students. He found that talking more openly and passionately about his own interests — namely, his appreciation for Styles — at the beginning or end of class helped break through those boundaries.

“Whenever I would do that, students would open up with their own interests in music, sometimes they overlapped with mine, and a lot of times we had really good conversations with the themes in his music,” he said, pointing to Styles’ performances and activism.

It’s not unprecedented for colleges to offer courses on contemporary music icons: Several have created classes around Beyoncé, a University of South Carolina professor taught a sociology class about Lady Gaga and New York University’s Clive Davis Institute recently introduced a class about Taylor Swift (who received an honorary doctorate of fine arts from the university earlier this spring).

Valencia approached the honors college dean in the fall of 2021 with the idea for a class, and wrote what ended up being a 23-page proposal during winter break. A lengthy process and seven months later, the course is officially on the books.

Now Valencia is hearing from scores of people who are excited about the class. People of all ages want to enroll, some want to follow along with the discussions online, others even want him to incorporate their fan poetry into the syllabus.

Valencia estimates he has received close to a thousand emails and messages in the past week, and says he has been “flabbergasted” by the positive response. In fact, between fielding media requests and savoring the messages, he hasn’t quite been able to respond to them.

“I’m actually trying to think about how to answer all of these questions in a way that is showing as much love as people have been showing in their messaging,” he says. Or, as Styles likes to say, treating people with kindness.

Students will study the historical record and produce a podcast

The class is open to undergraduate students in the university’s honors college, but not limited to history majors.

Classes with lots of interest typically choose students through a lottery system, and Valencia says modestly that he thinks that might be the case for this one.

Once students get their coveted spots, what exactly will they spend the next 15 weeks studying?

Valencia says that to stick to the facts, they are only looking at things that Styles himself has put on the public record. Those include his music, films and products, interviews and the musical and literary influences he’s discussed in the past, from Susan Sontag to Haruki Murakami to Alain de Botton.

The course will mostly proceed chronologically, with themes varying by the day. Of course, Valencia adds, it will examine the One Direction and Styles solo albums in order.

He says he’s especially excited to teach a history class that focuses on recent events, a relative rarity in the field. Plus, he notes, younger first-year students may not even remember some of the moments and trends that the class will cover in its 12-year span.

“I think a class like this has a benefit of really exploring what changes have happened over the last 12 years, and helps put that in context for students in a way that complements other classes in history departments that kind of give those other perspectives that maybe are in the distant past or larger periods of time,” Valencia says.

Students will talk about things like how Brexit impacted Styles’ tours and products, as well as social issues that Styles has spoken out about, including the Black Lives Matter movement and gun control.

Valencia says that in addition to a participation grade, students will be assessed as they complete the incremental pieces of their podcast, like research, scripting, audio editing and peer review.

He envisions the final product as a series of podcast episodes that are distinct enough to cover a range of topics, but cohesive enough to be packaged as a single series and released online for a wider audience.

The class is capped at 20, at least for now

Valencia plans to meet with university officials to think through some possible ways of meeting demand. He estimates it would probably take him another six months to develop an online version of the class, which people have already asked about.

“I kind of assumed nobody wanted another online class again,” he said. “I was like, ‘Oh, plot twist!’ ”

In any case, he is hoping to offer this class as many times as the university will let him.

And to answer another question on everyone’s mind: No, Styles himself isn’t scheduled to make a guest appearance — at least not yet. Valencia says he would love that, but doesn’t know how to go about getting into contact with the star’s team.

Short of a celebrity guest star, what are his other dreams for the class? Valencia says he has one big one, though acknowledges it may sound kind of cheesy:

“I would love for students to leave the class feeling a fraction of the self-love that many of Harry’s fans have when they leave his concerts,” he says. “And also thinking that maybe they now have the tools to do something in the world.”