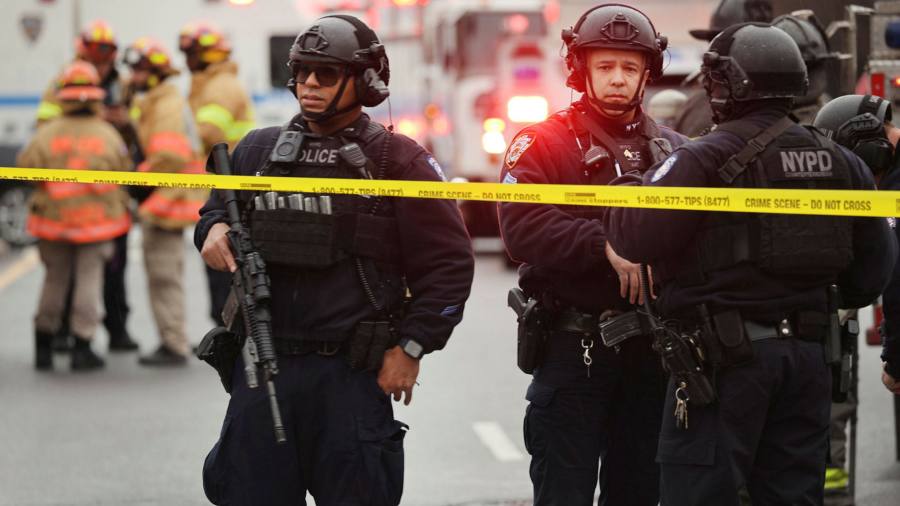 A suspect remained at large in New York City on Tuesday following an attack on a Brooklyn subway train in which 10 commuters were shot and at least 16 were injured.

Keechant Sewell, New York police commissioner, said that while five victims remained in critical condition, none of the injuries were life-threatening. The incident was not being investigated as a terrorist incident, she added.

The attack occurred at about 8:30 am, during the morning commute, between the 25th Street and 36th Street stations in the Sunset Park neighborhood of Brooklyn. Police said the suspect released a smoke grenade or other incendiary device before opening fire on passengers.

“As the train was pulling into the station, the subject put on a gas mask, he then opened a canister that was in his bag and then the car filled with smoke,” Sewell told reporters. “The suspect was in the train car. The shooting began in the train car. ”

Mobile phone video showed panicked passengers rushing out of the subway carriage as it pulled into the 36th Street station, with smoke and haze wafting out from its interior. Photos showed victims lying on a blood-soaked platform. Several witnesses reported hearing a loud bang.

Police said the suspect was a black man, about five-feet five-inches tall and of “heavy-build” who was wearing a green high-visibility vest and a gray hooded sweatshirt.

On Tuesday afternoon, US President Joe Biden tweeted: “Jill and I are praying for those injured in the New York City subway shooting. We are grateful for the first responders and civilians who jumped into action. My team has been in touch with city officials and we are working to support efforts on the ground. ”

Later at an event in Iowa, Biden added: “We are not letting up on it until. . . we find the perpetrator. ”

Meanwhile, several local schools were locked down. The attack occurred at a time when many New Yorkers have been on edge from a sharp rise in shootings and hate crimes that have moved public safety to the top of the political agenda.

The nation’s busiest subway system has been the scene of several gruesome attacks. That has made many residents fearful about using it and prompted business leaders to call for improved security as they try to encourage workers and tourists to return to a city still struggling to reopen from the Covid shutdown.

Dozens of ambulances and NYPD vehicles were lining Fourth Avenue, which was blocked off south of 35th Street. Hundreds of authorities, firefighters and city personnel converged on the scene, a wide thoroughfare lined with Italian delis and Chinese restaurants near the Sunset Park subway station. At least three helicopters were circling overhead.

The neighborhood boasts large Hispanic and Asian communities, the latter of which has grown rapidly in recent years.

Although details were scant, the attack brought to mind previous incidents, including a partial detonation of a pipe bomb in a Times Square subway station in 2017 that injured four people and a 1992 shooting on a Long Island Railroad train in which six people were killed.