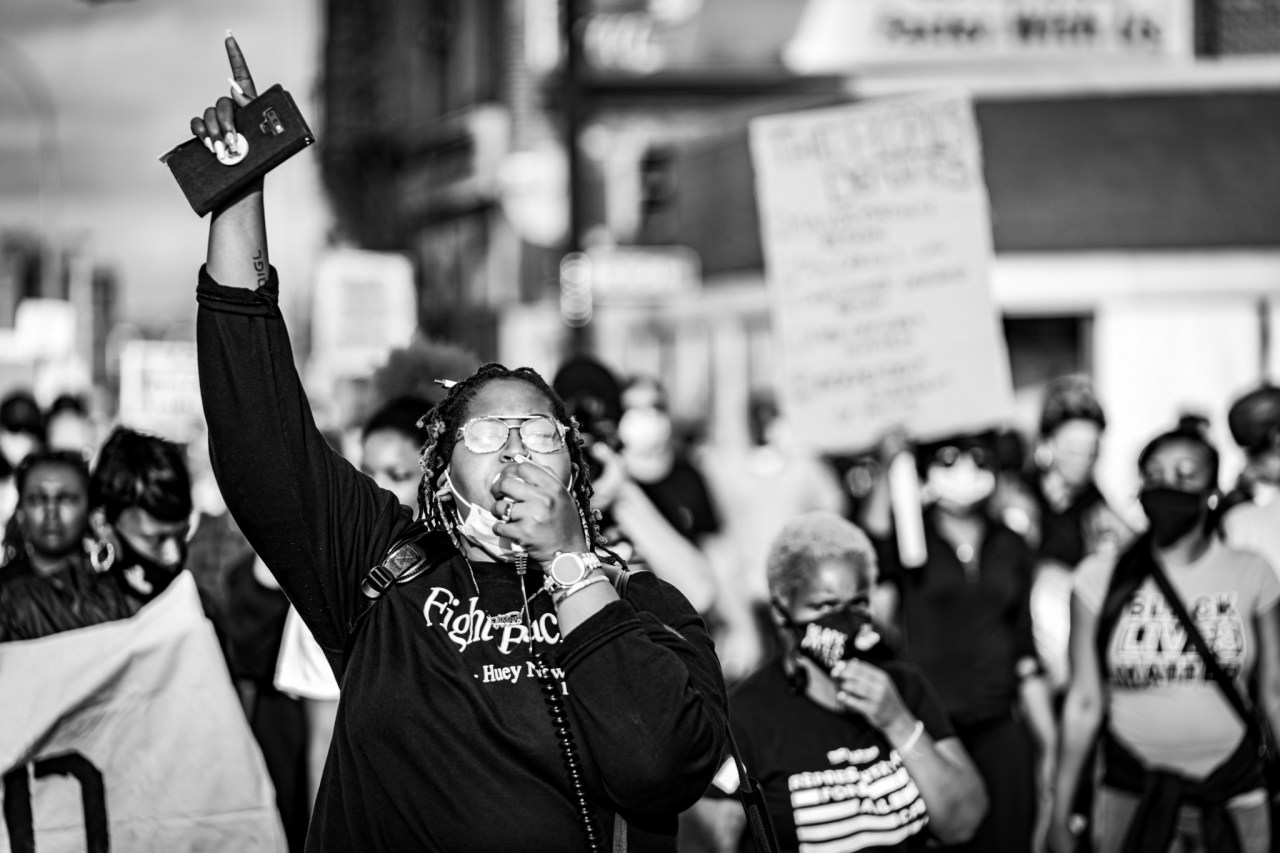 Jillian Hanesworth has heard the question more than once since the horrific events of last Saturday. She is, after all, her city’s first poet laureate. It’s her stated mission to “inspire Buffalo in verse,” to lift her voice.

“A lot of people have been contacting me,” Hanesworth said Tuesday at the Open Buffalo office on Jefferson Avenue. “They ask, ‘Are you going to write about this? When are we going to hear about this? ‘

“I like, ‘You’ve just got to give me some time to sit on it and process it.'”

Three days after 10 of her Black neighbors were shot to death by an 18-year-old white supremacist at the Tops Market down the street, the horror was too fresh, the pain too immediate and profound, for Hanesworth to be moved to create.

She’s seldom at a loss for words. Jillian has read her poetry hundreds of times in public settings over the years. Later that evening, she was scheduled to recite from her poems during a memorial vigil at the corner of Jefferson and Riley, across from the shuttered Tops where those innocent lives were taken.

“White supremacy is a poison”: Biden urges Americans not to remain silent after Buffalo attack

But shortly after word of the murders hit on Saturday afternoon, it was right there in her tweets. There were no words to describe the sadness and shock.

The Tops Market is right down Jefferson from Open Buffalo, a non-profit that promotes racial justice and equity in the city. Hanesworth, 29, a long-time community advocate, is the director of leadership.

Out the second-floor window facing down Jefferson, you could see the market in the distance. There was yellow tape sealing off the road and the adjacent plaza. Jefferson was closed at both ends over a six-block stretch, anticipating President Biden’s visit later in the morning.

Hanesworth shopped at the Tops almost every day. She ate lunch there. She knew everyone who was killed that day, at least casually. She was close with Aaron Salter – “Salt” – the retired Buffalo cop who worked security in the market and was killed trying to stop the shooter. One of the older women who died used to babysit Jillian’s mother.

“So, there’s degrees of separation with just about everyone, though I do not know everyone personally,” she said. “We’re family, and we survive over here together.”

The tight-knit East Side family is hurting, mourning the deaths of 10 loved ones and neighbors. Like any Black resident, Hanesworth has been dealing with feelings of grief and anger. She’s been very busy, too, suddenly popular with outside media. An hour before sitting down with WIVB, she was a national radio guest on NPR.

With ‘fire in the bones,’ Buffalo’s first poet laureate lights the way

“It’s been hitting me in waves,” she said. “One minute, I’ll be perfectly fine. The next minute, I will just be hysterical. Luckily, we’re going to have counselors here at Open Buffalo to talk to all the staff, because we are so close to the situation. This is our community. This community is like my baby. ”

She has been jotting down her thoughts, fragments of the poem inside her. Hanesworth is a political person, an activist who wore out a bunch of sneakers marching for racial justice after the murder of George Floyd in the summer of 2020.

Racial justice inspired her to write her first poem when she was just 10 years old. It was called “I Too Have A Dream,” inspired by Dr. Martin Luther King Jr.’s famous speech. The poem was about a child growing up in a segregated world. Soon, she was being asked to read it in public. Yes, even at 10, people clamored to hear her.

After graduating from Fredonia State in 2014, Hanesworth wrote a poem after learning that Darren Wilson, the policeman who killed 18-year-old Michael Brown in Ferguson, Mo., would not be charged with a crime.

That poem was entitled “I Wish That Little Black Boy Did Something,” a cry out against police violence against young Black males. That launched her career. She read that poem countless times, including an appearance at the University at Buffalo’s Educational Opportunity Center in 2017.

She became Buffalo’s first laureate in March of 2021, inspired by 20-year-old Amanda Gorman’s poem at Biden’s inauguration. Imagine, a Black girl who looked like the people she grew up with in Buffalo, performing her poetry before the President and the world.

Gorman’s poem, “The Hill We Climb,” included these words: “Step out of the shade, aflame and unafraid… for there is always light, if only we’re brave enough to see it.”

That message resonates today, as Buffalo reels from the worst mass shooting in the city’s history. Gorman is talking about eternal, unconquerable hope. Even in the midst of crushing sadness and dark times, a community still finds a light.

“Yeah,” Hanesworth said. “Because the people are the hope and the light. We are that. I know that as long as I have breath in my body, I’m not going to stop calling for change and accountability, calling for us to help dismantle these systemic problems. That right there is hopeful. We are not going to stop. ”

Still, it’s not easy to be “aflame and unafraid.” It’s also difficult to channel hope and anger at the same time, to see progress when a certain deranged element of the culture is indoctrinating young people with hate and lies that lead to violence.

“I think it’s a combination of anger and grief,” she said. “There is some fear. A lot of kids I’ve talked to have been really nervous about going into different grocery stores, or corner stores and gas stations.

“But I’ve watched the fear evolve into grief, and the grief is now evolving into a desire to help. I feel like as things evolve, I’ll figure out a way to make it evolve in writing as well. I do not want to focus on hope without capturing grief. I think that would be a disservice to the community. ”

“I started writing a little bit. It has not come out all the way yet. ”

When she spoke with WIVB a year ago, Hanesworth said that the Black community continues to get re-traumatized. It’s been a perpetual cycle for a community that came out of slavery and has suffered through continued racial injustice.

“You’re a coward” yelled at mass shooting suspect after indictment

“I think a lot of people, especially on the East Side of Buffalo, have been forced to live in a perpetual state of survival. And it’s always something. If it’s not something with the police, it’s something in the water. If it’s not the water, it’s public health. It’s literacy, it’s crime, it’s housing.

“All of this is a symptom of poverty,” Hanesworth said. “If you’re not out here mourning the loss of our community members, you might be trying to figure out how to get to your paycheck. So we have been stuck in this state of survival. We do not exist to survive. We can demand more. We are owed more. ”

People do not exist to survive, but they need to exist. For now, the priority is making sure the East Side feels protected and valued and that people have the things they need to get by.

“Everyone just wants to feel safe, and everyone is just doing the best they can,” she said. “A big part of what I see is people trying to find any way to help. A lady yesterday made a bunch of sandwiches at her house and just came and started feeding people. Making sure this community eats has been a huge priority, making sure they have access to food and formula and diapers. ”

How to help those affected by the Buffalo mass shooting

“Today, a lot of our staff are out grocery shopping. We’re going to barbecue and hand out food. We’re also going through the stages of this, and trying to help each other through it.

That means helping people from outside the community understand that they can help too, that everyone needs to come together to put an end to the violence and hate.

“When white people ask me ‘What can I do to help?’ I’m like, ‘You’ve got to be honest, you got to talk to the people at your dinner table and your Thanksgiving table. Talk to that uncle who makes you uncomfortable because he never takes off the MAGA hat.

“Those are the people you need to be targeting. Let us do the work to heal, and to get out of this state of survival. But you need to speak truth to power as well. Talk to your community. Stop this indoctrination. Stop people from thinking that white people are going to be outnumbered, or that it even matters. ”

There’s a lot to do, and Hanesworth keeps moving. Her friends and family urge her to make sure she eats and gets enough sleep. But her voice is supposed to inspire the people of Buffalo, and they’ve never needed it more.

On Tuesday night, there was the vigil at Jefferson and Riley. She’s waiting to hear about another vigil being organized with the hospitals. She’ll be speaking at that. Oh, and she’s scheduled to speak at UB’s EOC commencement Wednesday at Center for the Arts.

Then the poet laureate gazed out the window toward the Tops Market and talked about her dream of bringing more art to the streets. What better way to restore life to a wounded city than to display the artwork of its citizens?

“We’re such an artistic community,” she said. “Something to celebrate the lives we lost, but also celebrate the life and the magic that’s within this community, that can not be taken away. There are certain things that you can not kill. ”

Jerry Sullivan is an award-winning journalist who joined the News 4 team in 2020 after three decades as a sports columnist at The Buffalo News. See more of his work here.