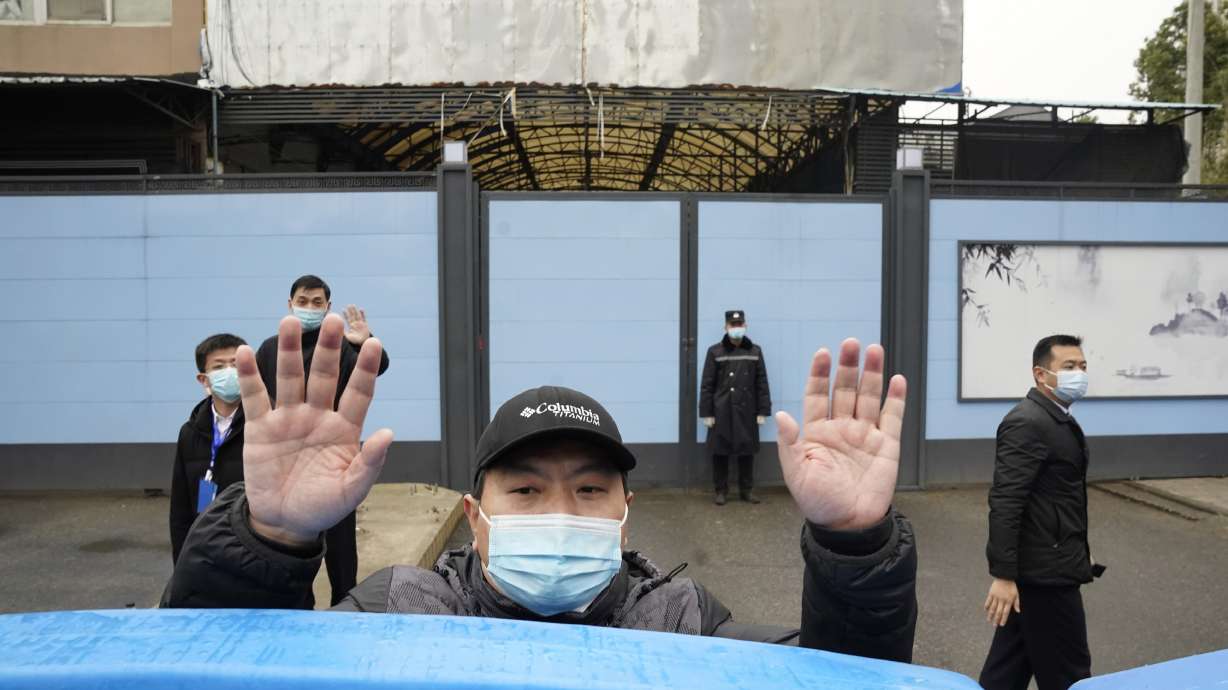 In this Jan. 31, 2021 photo, a security guard waves for journalists to clear the road after a convoy carrying the World Health Organization team entered the Huanan Seafood Market. New research found that the Huanan foods market in Wuhan, China served as the epicenter for the SARS-CoV-2 outbreak in late 2019, a study co-authored by a University of Utah researcher says. (Ng Han Guan, Associated Press)

SALT LAKE CITY — New research shows the Huanan Seafood Market in Wuhan, China, served as the epicenter for the SARS-CoV-2 outbreak in late 2019, despite earlier beliefs that the pandemic started elsewhere.

“This paper … really makes clear that the first place this virus was circulating was the neighborhood immediately surrounding the Huanan market. Within the Huanan market, the virus clearly emanated from the section of the market that was selling live animals,” Stephen Goldstein , virologist and postdoctoral researcher at the University of Utah School of Medicine, said Tuesday.

Goldstein served as a co-author on the international study published Tuesday in Science Magazine.

While early reports indicated the virus originated at the market, later reports speculated that it escaped from a Chinese lab.

The researchers estimate a total of eight variants were introduced to humans on the market, but just two — called the A and B variants — caused human infections.

Goldstein said the research disproves the idea that the virus came from a Chinese lab. In December 2019, the virus was only circulating in the area immediately surrounding the market, which is “quite a distance away” from the Wuhan Institute of Virology that’s been suspected as the source, according to Goldstein.

“So the idea that the virus was quietly circulating throughout Wuhan and then just introduced to the market, where there was a super-spreading event — we’re able to disprove that possibility,” he said.

Animals that are susceptible to SARS-CoV-2 were sold at the Wuhan market, “including in November 2019, when the companion paper estimates the first human infections occurred,” Goldstein said.

Those animals included raccoon dogs, badgers, hares, rabbits and foxes, all of which are known to be susceptible to infection. But researchers believe those animals served as intermediate hosts of the virus, and likely picked it up from infected bats.

But little remains known regarding how the bats infected the other animals — or the “upstream” origins of the virus. More research is needed to understand how to limit the ability of viruses to cross between species.

The researchers were able to reconstruct the market using information from a Chinese report, data from the World Health Organization origins mission and business registries of the market. They identified 10 to 15 stalls within the market that were selling live animals, according to Goldstein.

Five virus-positive environmental samples from the market came from one stall, from items associated with the live animal trade including cages, carts and a drainage grate underneath the stall. Those samples were clustered in the southwest corner of the market, and the closer a sample was to a live animal stall, the more likely it was to test positive for the virus, Goldstein said.

While the findings in this paper and a companion study give a “high degree of confidence” that the first human infections occurred at the animal market, Goldstein said, the events leading up to the market outbreak have yet to be understood.

Researchers don’t know whether there were early infections in animal traders or people who worked at animal farms. Those clues could lead to information about what types of regulation within the animal trade could reduce the risk of future animal virus spillovers to humans, Goldstein said.

“As to what kind of measures could be taken … to minimize further spillovers, I would leave that primarily to experts in public health and animal ecology experts in the live animal trade, in live animal trade throughout the world, particularly in China and southeast Asia, to prescribe certain measures that might do those things,” he said.

Some potential solutions include surveillance testing of animals on farms and farm workers who might be exposed to viruses; removing infected animals from the supply chain; and, any kind of regulation of live animal sales in cities, according to Goldstein.

Ashley Imlay covers state politics and breaking news for KSL.com. A lifelong Utahn, Ashley has also worked as a reporter for the Deseret News and is a graduate of Dixie State University.