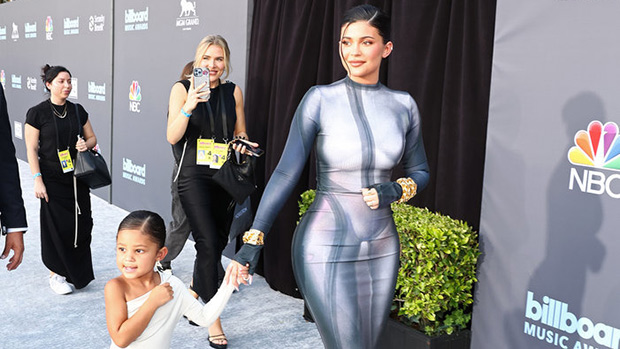 The 2022 Billboard Music Awards served as a family date night for Travis Scott31, Kylie Jenner24, and daughter Stormi, 4! The eldest daughter of the beauty mogul and rapper looked like she was having a blast as she walked the red carpet alongside her parents at the MGM Grand Garden Arena in Las Vegas on May 15. She wore a one-sleeved white mini dress by Rick Owens with matching white combat boots. Her hair was neatly pulled back into a bun.

Kylie opted for a curve-hugging Balmain dress that was shaded in different hues of blue. The graphic design featured on the fabric seemed to depict the faint outline of a woman’s body, making it appear as a sheer dress. The mom of two accessorized with chunky gold bracelets on her wrists and styled her hair in a sleek bun, which had a strand of hair pulled out at the front to frame the right side of her face. She completed her outfit with gold sandals.

Meanwhile, Travis donned a more casual-looking dark gray suit that appeared to be made of comfortable material. He paired his suit with a white t-shirt and off-white and dark green Nike sneakers. The “Antidote” rapper was also seen holding Stormi to let Kylie take some solo shots.

Travis is both nominated and performing at the 2022 Billboard Awards. The performance will serve as his first live-broadcasted one since his November 2021 Astroworld Festival tragedy, during which 10 people were killed in a crowd surge. The rapper’s remix of “Goosebumps” is nominated in the top dance / electronic song category.

The date night did not include Kylie and Travis’ newborn son they had in February. They have been very hush-hush about their second child, especially after changing his name from Wolf Jacques Webster. “FYI our sons name is not Wolf anymore,” Kylie stated on Instagram on March 21. “We just really did not feel like it was him. Just wanted to share because I keep seeing Wolf everywhere. ” Their baby’s new name has yet to be revealed. Fans did get a peek at the couple’s son, though, on May 4 when the Kylie Cosmetics founder shared a quick Instagram story about his $ 200 Travis Scott X Air Jordans. “Look at my son’s cute shoes!” she gushed in the video. “He can not even walk yet!”

Rauw Alejandro: 5 Things To Know About The Puerto Rican Singer Performing At BBMAs