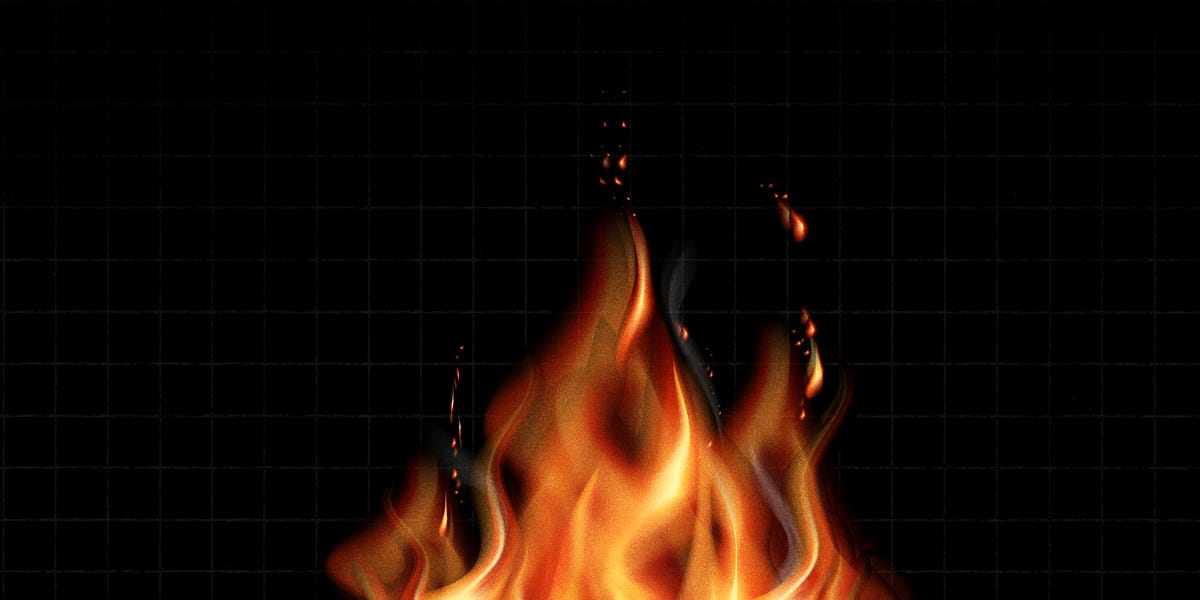 Robinhood flew high and fast last year, only to crash under its own weight. The year began with the company in the spotlight, so how did it end with rumors of a takeover?

In its most recent quarterly report, Robinhood disclosed that it had lost $ 423 million in the last three months of 2021. Worse, in the past year, the no-commission stock-trading platform lost $ 3.7 billion, and it shed about 80% of its

following its post-IPO peak in August. The company’s stock, since debuting at $ 38 per share, has continuously slid, reaching a low of about $ 9 per share and remaining today at around $ 11.

The novel investing app began in 2013, with a mission to democratize the world of finance by marketing to a younger audience. While the platform remained largely out of the public eye for most of its rise, early last year a well-publicized meme-stock craze blasted the company to stardom. But as the fanfare subsided, Robinhood’s popularity took a sharp dip. Now, the future of the company that sparked a retail-trading boom looks increasingly bleak.

Robinhood made its name over the past few years as a friendly, no-fee, gamelike investing app aimed at first-time investors. Users would get alerts when their stocks were on a run, digital scratch cards to “win” free shares, and an animation of confetti exploding across their screens when they made money. It was part of Robinhood’s mission to “democratize finance for all,” and the gamelike elements were meant to “cheer on customers through the milestones in their financial journeys.”

The app grew in popularity in the early days of the pandemic when people were stuck at home and flush with stimulus cash – 9 million users joined in 2020, the company said. Then, last January, a group of retail stock traders on the Reddit forum WallStreetBets drove the app further into the limelight. In a sensational market event that set the financial world ablaze, WallStreetBets members drove up the price of so-called meme stocks GameStop, AMC, and Bed Bath & Beyond. At one point, GameStop’s stock was up 1,700%. As media attention grew, and more day traders piled on, the clouds started rolling in.

The first sign of trouble came in the midst of the Reddit craze when Robinhood began to restrict the trading of certain meme stocks. Users rebelled, but it turned out that it was not a conspiracy on Robinhood’s part to protect hedge funds from losing money, as many Redditors alleged, but an obscure financial regulation that required Robinhood to put up billions of extra dollars to make sure the extra -risky trades that were fueling the mania went through. “It’s not really Robinhood doing nefarious stuff,” Larry Tabb, an analyst at Bloomberg Intelligence, told journalist Matt Levine.

Robinhood users were upset, but their frustration only grew when it became common knowledge that Robinhood’s no-fee trading platform was funded by something called “payment for order flow.” Under this system, market-making firms paid Robinhood to process and execute customers’ trades, taking a small slice of the pie while doing so. In a sense, Robinhood users were not customers of the app, they were the product. Robinhood profits when trades are placed, which means it likely made a fair amount of money in early 2021. One research firm estimated that the company made $ 110 million on the meme-stock craze.

All of this drama brought a lot of attention to Robinhood, and soon, people were interested in the finer details of payment for order flow, Robinhood’s decision to restrict trading, and what was now being called the gamification of trading.

In a surprising turn, both Democratic Rep. Alexandria Ocasio-Cortez and Republican Sen. Ted Cruz condemned Robinhood for its decision to halt trading, which cost retail traders money. The Securities and Exchange Commission announced it would study the events and later issued a report. By the time Robinhood held its initial public offering in July, it was already in the midst of multiple controversies and court cases stemming, at least in part, from the meme-stock run.

In June, Robinhood paid a $ 57 million fine to the Financial Industry Regulation Authority – one of the organization’s largest fines – and $ 12.6 million in restitution to its users. The regulatory body alleged a number of problems with the company: that it distributed false or misleading information to investors, failed to regulate its own technology, had a lapse in due diligence in approving options accounts for inexperienced traders, and offered incomplete market data to users . In a 122-page report, FINRA found that Robinhood’s customer-identification system was automated, and that more than 90,000 accounts were opened despite posing red flags for fraud. FINRA also said that frequent outages prior to 2020 kept clients from their accounts.

The regulatory threats kept coming. In late June, SEC Chair Gary Gensler began looking into payment for order flow, saying it had long been banned in Britain, Canada, and Australia. In August, Gensler said a ban was “on the table” and “an inherent conflict of interest.” Robinhood’s profit engine was at risk: 80% of its revenue came from payment for order flow, its 2021 second-quarter report said.

Even the gamification that Robinhood became known for came under scrutiny. While the platform removed its confetti animation shortly before its IPO, Gensler vowed to investigate gamification. The question at hand was whether the push notifications and other in-app prompts constituted investment advice. “In many cases,” Gensler said in a release, “these features may encourage investors to trade more often, invest in different products, or change their investment strategy.”

Kevin Werbach, a professor of legal studies and business ethics at the University of Pennsylvania, studied the gamelike aspects of financial markets. He believed that markets had, to greater and lesser degrees, always functioned like games. Robinhood’s problem was not that it treated markets like a game, but that it violated the rules its users thought they were playing under. For regular investors, finding out the company made its money on payment for order flow was a huge blow.

“Robinhood is suffering the consequences today of, in part, failing to design its gamification with player interests at the core,” Werbach said. Robinhood users found out that, unlike in a video game, they were not the main characters.

While customers’ complaints have generally not made much headway, in January a FINRA arbitrator said Robinhood was liable for $ 29,460 in compensatory damages to Jose Batista, a truck driver and trader from Connecticut who filed a complaint with the regulator last May. While the fine itself is a drop in Robinhood’s bucket – the company has a market valuation of $ 13 billion – it suggests that others may find success in bringing legal action against the company. And while a class-action lawsuit in Florida with antitrust implications against the company has been established, all of these lawsuits set precedents for users’ willingness to pursue legal action.

‘Quite simply, trading has not been much fun’

Though its legal troubles are mounting, the real threat to Robinhood is simple: Its main business is drying up.

“Active retail trading has declined substantially over the past year, and especially over the past few months,” said Craig Birk, the chief investment officer at Personal Capital. “Quite simply, trading has not been much fun. Interest has subsided as easy gains have disappeared.” The mania of the meme-stock short squeeze has cooled.

In 2019, retail trading was about a tenth of the trading volume in the US, and by 2021 it had exploded to a quarter. But Morgan Stanley reported in January that it was back to about 11%.

This is a problem for Robinhood because its business is not as diversified as that of other financial firms, such as Charles Schwab. As it stands, Robinhood does not offer much beyond stock and crypto trading. It does not offer retirement accounts or any type of banking, though it recently announced that it hoped to expand into retirement accounts in mid-2022. Robinhood also said it planned to expand its crypto-markets offerings as a way to offset the decline in retail stock trading.

Because Robinhood markets itself to new investors, the average account is significantly smaller than at its larger rivals. Robinhood’s average account balance for its 22 million users is about $ 3,500, whereas Charles Schwab has 32 million accounts with an average value of $ 240,000. Schwab offers far more products and thus has a far larger institutional hedge than Robinhood does.

If Robinhood’s negative press has hurt its users’ confidence, there have also been plenty of rivals entering the field promising a better experience, including Webull, eToro, and ZuluTrade. Like Robinhood, these apps hope to draw customers in and compete against big brokerages by offering more social-media-like elements. Some retail traders, who were upset to realize that trading through brokerages meant they did not directly own the stock, even resorted to trading on direct markets, such as Computershare. And while Robinhood had a head start, broker giants – including Fidelity, Schwab, and TD Ameritrade – are catching up to its tech with more user-friendly mobile interfaces.

The question then is whether Robinhood, or other

that cater to retail investors, can design a platform that centers on the user instead of on the brokers that pay to complete its customers’ trades. A more user-centric platform would realign Robinhood’s profit engine so that the company would make money when its customers made money – meaning it would likely advise its clients to invest in a safe way that was not as risky as retail trading. That is, it would operate more like a fuddy-duddy brokerage like Schwab, advising clients to invest their money in low-cost index funds.

At some level, the question of whether Robinhood will rebound or continue to run aground is a question of whether retail trading will remain popular. Anyone who sat through the endless day-trading infomercials of the late ’90s that promised great riches, only to see them disappear immediately after the dot-com bust, knows that the popularity of day trading ebbs and flows. The past two years might end up looking like a fluke in which the masses temporarily rushed into securities.

And from one vantage point, Robinhood’s business model was less about democratization than it was about capturing a young, less experienced market of investors. For a while, this worked. But younger generations, both millennials and Gen Z, simply have less money to invest, and without another frothy meme-stock craze, Robinhood probably can’t compete with larger firms whose customers have much more money to play with.

The banning of payment for order flow would make Robinhood’s dilemma even more complicated because the company would either have to charge fees for trades or find another way to offer no-fee trading that would not set it at odds with its customers. But James Tierney, a law professor at the University of Nebraska, said regulating retail trading more strictly could protect retail traders from overtrading and losing money.

Eventually, Tierney said, after an episode like the meme-stock craze, retail traders realize that it’s quite difficult to make money in financial markets. “Nonprofessionals trade too much and mostly aren’t very good at it,” he added. And because Robinhood only profits when people trade, the company can not make money. This could be part of the reason it lost $ 423 million last quarter.

While retail trading may remain popular because of how easy it is to access markets on a cellphone, the fall of Robinhood shows that the craze is morphing into something different. As other no-fee platforms flood the market, many may absorb some of Robinhood’s user base. It’s also possible that Robinhood will be bought by a larger firm, as large companies have started to gobble up small fintechs and trading apps. To stay alive, Robinhood needs to offer more than stock and crypto trading. In the future, it may need to look more like a traditional brokerage.

“Mobile trading apps, social-media influence, and zero commissions likely mean more people may trade actively than in the past,” Birk of Personal Capital said. But unfortunately for Robinhood, he added, “it will likely be a while until we see the kind of enthusiasm witnessed in late 2020 and early 2021.”