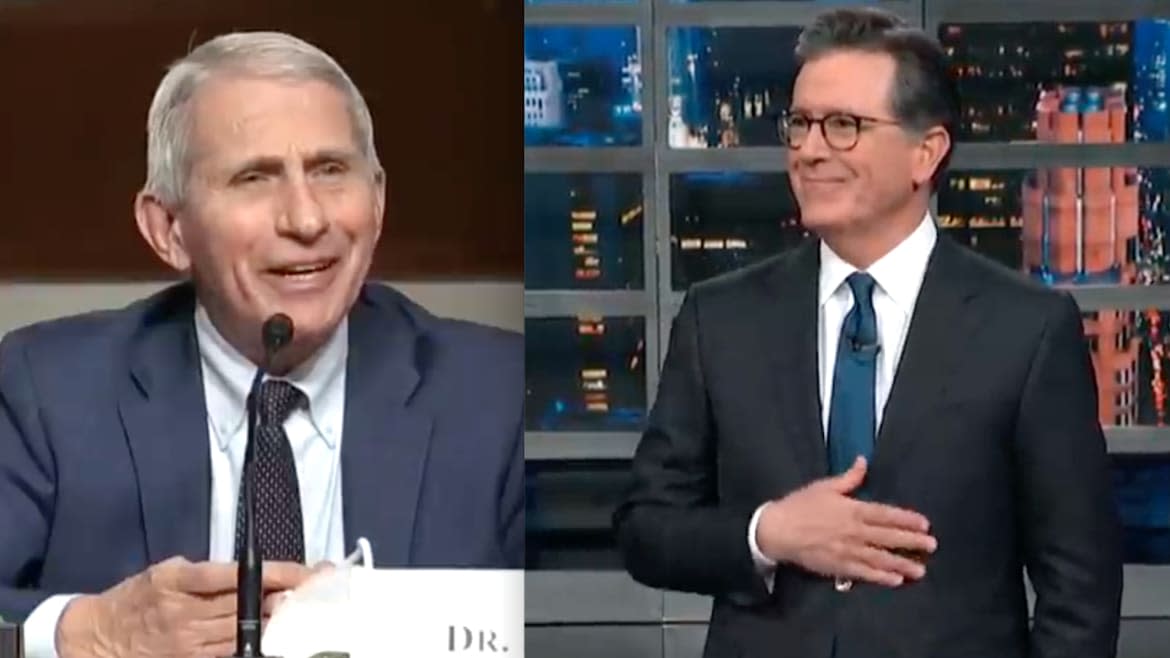 After dividing by the number of Americans currently wearing COVID-19 The late show On Tuesday night, Stephen Colbert said: “Of course, the big danger is that COVID has mutated into a political issue.”

He spent the next many minutes covering Dr. Anthony Fauci’s heated testimony on Capitol Hill earlier in the day, where he again bumped into his “old nemesis” senator Rand Paul (R-KY) and was caught on a hot microphone calling another Republican senator an “idiot.”

“Get him, Fauch!” exclaimed Colbert after playing the clip of Fauci accusing Paul of “distorting” everything about him. “Take off your gloves and a mask! ‘I have your results, senator, and I’m sorry to let you know you’ve got my boot in your ass.’

“But if there’s one thing out there that’s more contagious than COVID, it’s silly,” the host later added.

Specifically, he referred to Senator Roger Marshall (R-KS), who claimed during the hearing that his staff was unable to find Dr. Fauci’s public economic revelation. “And Fauci let it be known that it is not his fault if the senator does not know how to Google,” Colbert said, before sharing the moment when the director of the National Institute of Allergy and Infectious Diseases could be heard. utters, “What an idiot,” followed by “Jesus Christ” under his breath.

“And now that clip lives on the Internet forever,” he said after he stopped laughing. “The one place where Senator Marshall and his staff will never be able to find it.”

For more, listen and subscribe The last laugh podcast.

Read more on The Daily Beast.

Get Daily Beasts biggest scoops and scandals delivered straight to your inbox. Sign up now.