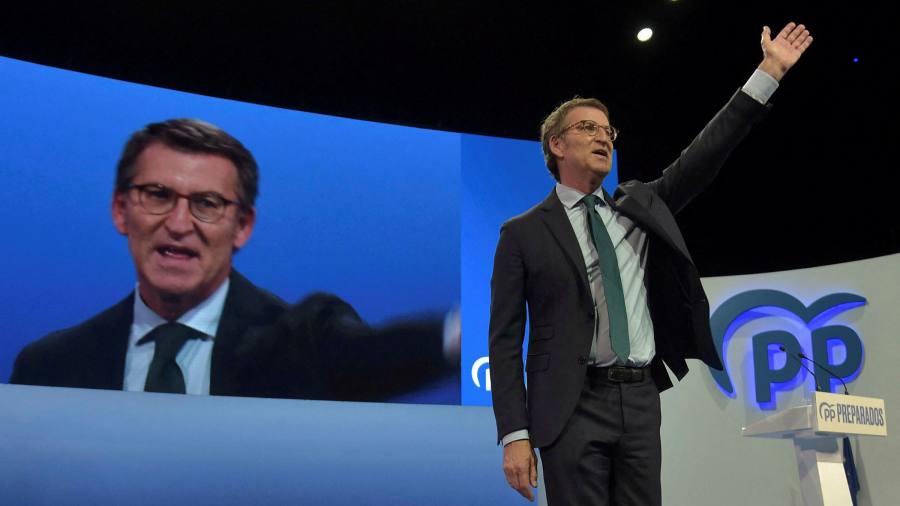 Spain’s battered and bruised opposition People’s party proclaimed Alberto Núñez Feijóo, one of the country’s most experienced politicians, as its new leader on Saturday, as it seeks to re-establish itself as a party of government.

The choice of Feijóo by 98 per cent of those attending a special congress in Seville follows the self-destruction of the previous leadership in an internecine PP fight.

“This is just the beginning. . . Spain deserves better, ”said Feijóo, the long-serving leader of Galicia, the north-west region that has produced three of the center-right party’s leaders during the PP’s 33 years of existence.

Calling for “adult” rather than “infantile” politics, he has set out the goals of cutting taxes, improving public services and increasing investment.

But the biggest challenge facing the 60-year-old is the rise of the hard right Vox party, which has torn away voters from the PP and now rivals it in the polls.

“Feijóo is the party’s natural leader, the person the PP should have chosen last time around,” says Lucía Méndez, a leading Spanish journalist who has known the politician for 15 years.

“His main goal is to win back the votes his party has lost to Vox – if he can not do it, probably no one can.”

Feijóo, who won his fourth consecutive absolute majority in Galician elections in 2020, has presided over his region while the PP as a whole has been racked by crisis.

The party was ejected from national power amid a corruption scandal in 2018 – after which Feijóo declined to run in a divisive battle for the leadership – and suffered its worst election defeat the following year.

Vox, which was formed by former PP politicians, subsequently rose in the polls, winning 18 per cent in regional elections in Castile-León this February.

Soon afterwards, Pablo Casado, the PP’s 41-year-old then leader, was pushed out following months of a debilitating internal party feud.

Party officials say this weekend’s congress was an attempt to “reset” the PP as a center-right pro-European party. Coming from a region where the native language is Gallego, which shares roots with Portuguese, Feijóo declared the PP “the party of cordial bilingualism”.

His words were an apparent outreach to regions such as Catalonia and the Basque country, where the PP vote has collapsed – and marked a strong contrast with Vox, which has gained support in reaction to Catalan separatism and wants a more centralized Spain.

“Feijóo represents a pluralistic Spain, not a polarized Spain,” said one official, who cited Germany as a country that had relatively successfully contained the hard right and who compared Galicia under Feijóo to Bavaria’s Christian Social Union, the Christian Democrats’ regional sister party .

Feijóo took over as his party’s Galicia boss in 2006 from Manuel Fraga, the former Franco-era minister who founded the PP, and has maintained a broad swath of support ever since. However, he was involved in controversy in 2013, when two-decade-old photos emerged, showing him holidaying with a man subsequently convicted of drug trafficking. In responding to the photos, Feijóo has described his then choice of vacation companion as naive.

“National politics will be harder and more demanding for Feijóo than Galicia,” said Méndez.

Some critics say Feijóo’s centrist politics will be sorely tested by the need to do deals with Vox – which is about to enter regional government for the first time, as the junior partner to the PP in Castile-León.

Méndez argued Feijóo would be able to sideline Vox, much as Prime Minister Pedro Sánchez has largely excluded Podemos, the radical left party in his Socialist-led coalition.

But not everyone is convinced. “Feijóo has experience, he’s shown he knows how to manage,” Lorenzo Bernaldo de Quirós, president of Freemarket, a Madrid-based consultancy, said of the reserved Galician politician. “But the problem is we do not know what his project is; we do not know what he wants. ”