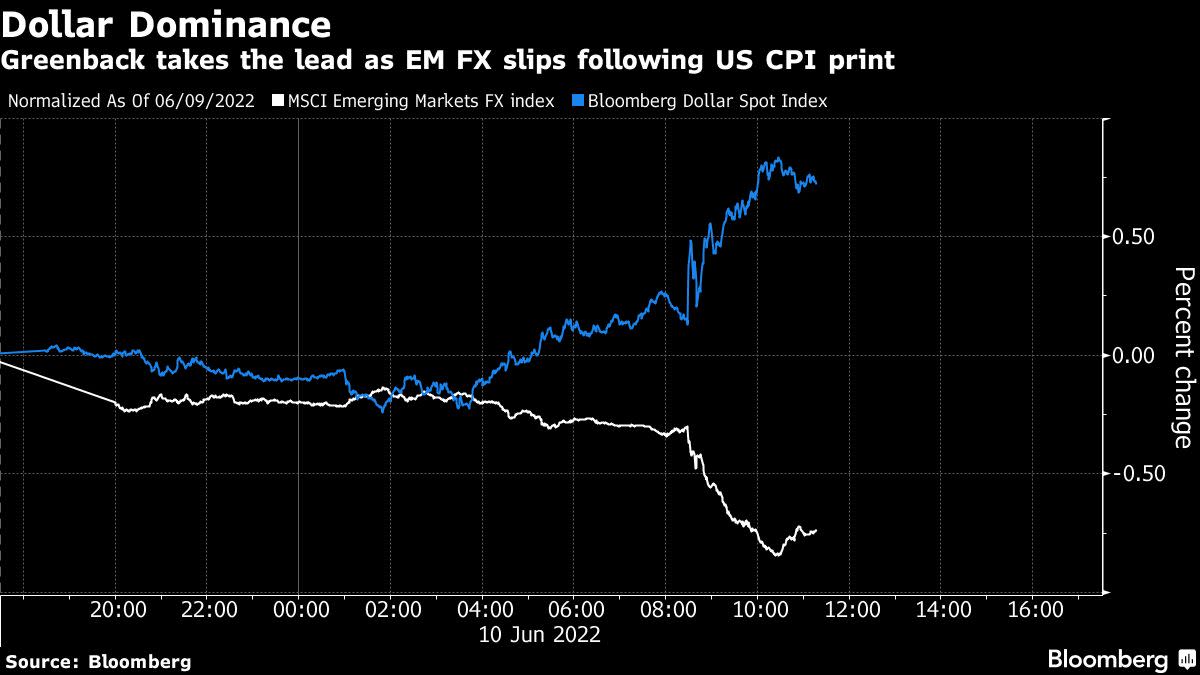 (Bloomberg) – Investors are rushing to buy dollars after US inflation accelerated to a fresh 40-year high last month, adding pressure on the Federal Reserve for more aggressive interest-rate increases.

A key gauge of the dollar jumped 0.8% on Friday, heading for its biggest gain in five weeks after US consumer prices quickened 8.6% from a year earlier, topping estimates. The greenback’s strength sent nearly all of its Group-of-10 and emerging-market peers tumbling. MSCI Inc’s developing currency index is on track for its worst day since early May, led by losses in Brazil’s real and South African rand.

“Markets are shifting expectations toward a higher terminal rate for the Fed. That’s supportive for the US dollar and bad for risk assets, ”said Bipan Rai, head of foreign-exchange strategy at Canadian Imperial Bank of Commerce. “The need to take settings into restrictive territory has increased.”

The British pound led losses among Group-of-10 currencies, weakening by as much as 1.4% to the lowest in three weeks, as traders bet the local monetary authority will lag global peers in the race to increase rates. The South African rand, a bellwether for risk sentiment within the developing world, lost more than 2.3% on Friday, the most in over a month.

The rush for dollars comes as swap contracts referencing Fed policy meeting dates repriced to levels suggesting that the US central bank – which was already expected to raise rates by half-a-point in June and July – will do so again in September, with some risk of a three-quarter point increase in months to come.

That contrasts with a more dovish stance held by Bank of Japan, which has sapped some safe-haven appeal from its currency. The Japanese yen edged higher against the dollar on Friday, but still traded near a 20-year low. The Swiss franc is also failing to lure traders, falling as much as 1% Friday for a sixth straight decline versus the greenback.

“With US rates much higher and stocks way lower, the dollar is a safe-haven trade,” said Brent Donnelly, president of Spectra FX Solutions. “The only safe haven left is the US dollar.”