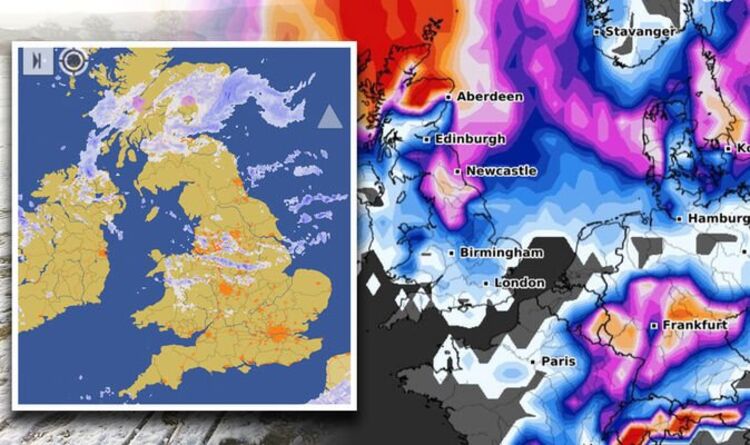 Snow is currently falling in the northern parts of Scotland, with Glasgow and Iverness predicted to have up to 2cm settle according to WXCharts. London, as well as parts of East Anglia are facing thunderstorms, lightning and hail this Wednesday afternoon.The Met Office has forecast rain and showers for a vast majority of UK for the remainder of the day, with the “risk of hail and thunder” for other parts of the country.

The Met Office tweeted: “An intense line of heavy showers is bringing a short period of torrential rain and thunderstorms as it moves east across London.

“Be aware of the potential for some surface water on the roads and some lightning strikes across SE England”.

The Met Office has issued two yellow weather warnings of strong winds across northern Ireland and parts of the northwest – spanning Bangor and St Asaph in northern Wales, as well as areas from Chester to Lancaster.

These yellow warnings will remain in place from 8pm today until 5am on Thursday, with an additional yellow warning issued for the northern part of Scotland for snow.

Over the course of the evening today, a strong northerly wind is due to spread across the country, bringing much colder temperatures with it.

Scotland will see more breakouts of rain in the northern areas, which will turn to more snow in the northeast, especially on the hills.

Winds will become stronger in the northwest with gusts of 50-60 mph around the coast.

The Met Office forecast reads there will be “showery bands of rain crossing many other areas” with winds – described as gales – almost everywhere else.