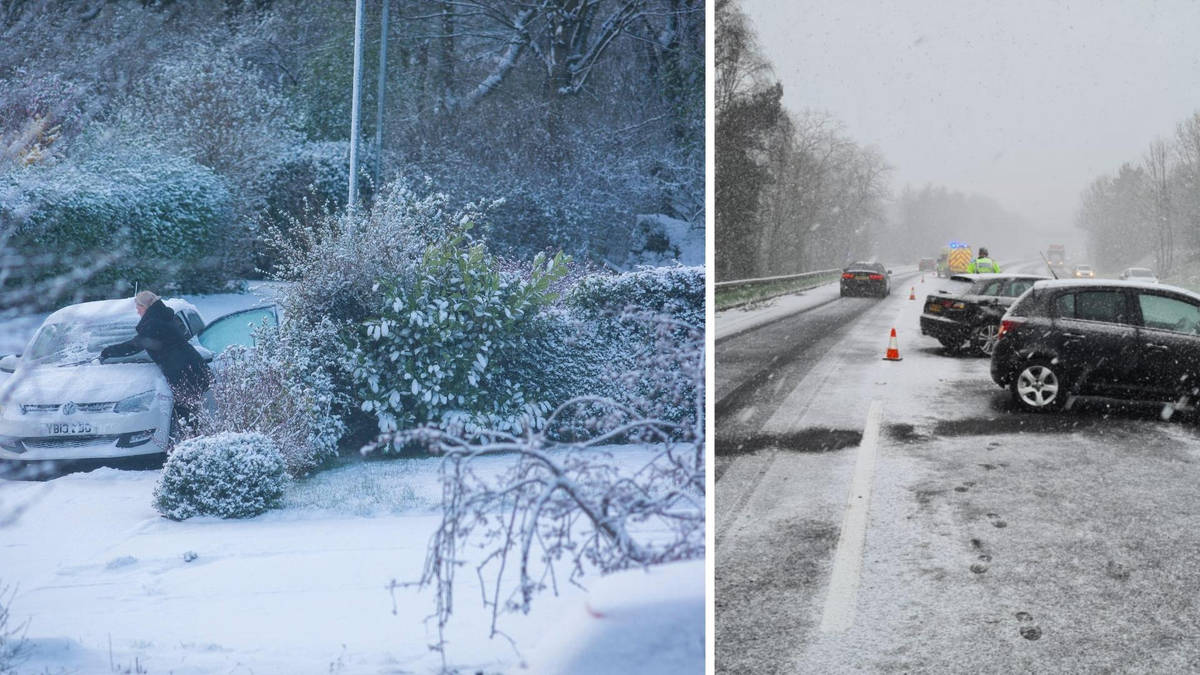 Snow began to fall across the capital on Thursday morning, as the UK braces for four days of bitterly cold temperatures.

Shocked residents have taken out their phones to record flurries of snow settling on roads, roof and gardens across London, Northamptonshire and Suffolk this morning.

The Met Office issued a yellow alert for snow and ice for today, covering a large part of the North East of England and Scotland with temperatures set to drop as low as -5C.

Forecasters added that thundersnow – a weather spectacular which happens when thunderstorms form in wintry conditions – had already been observed in areas of England’s east coast.

Read more: Beckhams’ horror as masked raider breaks into £ 40m mansion while family were at home

High ground across the UK in the North and Midlands could see nearly an inch of snow.

The yellow weather warning for snow and ice covers the north of Scotland until 10am on Wednesday.

An ice warning extends to the northeast of England and Yorkshire and the Humber from 8pm until 10am on Thursday.

The Met Office is warning of hazardous driving conditions in affected parts of the country.

Met Office Deputy Chief Meteorologist Helen Caughey said: “Cold and unsettled weather takes charge over much of the UK this week, as cold air is drawn in from the north, bringing with it the risk of rain, sleet and snow, and a widespread drop in temperatures.

“Although there’s still some uncertainty on the exact location of snow showers, the trend is for a mix of sleet and snow to fall as a cold front moves south through on Wednesday, before clearing southern areas on Thursday morning, with the main areas at risk of snowfall being higher ground in the north and east.

“The best of any clear and sunny spells through the rest of this week are likely to be in the south and west of the UK, albeit feeling colder compared to last week.”

Weather experts predict the cold front will continue to push south, with the risk of wintry precipitation persisting, before eventually clearing southern areas on Thursday.

Overnight in the southeast, there may be some temporary accumulations, mainly over higher ground, but potentially briefly to lower levels.

If it does manage to settle it will most likely be on grassy surfaces, with road temperatures having built up sufficiently in the recent mild weather to avoid any significant issues.

Behind this, wintry showers follow for many areas through Thursday and Friday, especially northern and eastern areas.

Snow becomes increasingly confined to higher ground, with rain more likely at low levels, although an odd flurry of sleet or snow can not be ruled out.

Coupled with the sleet and snow is the drop in temperatures that many places have already been experiencing.

Isolated rural areas in the north of Scotland could see temperatures as low as –8C later in the week, with sub-zero temperatures possible overnight for much of the UK.

The unsettled theme will continue through the weekend, although temperatures will gradually recover to near-average over the weekend and into the start of next week.

Further North people woke up to 5cm of snow blanketing the ground.