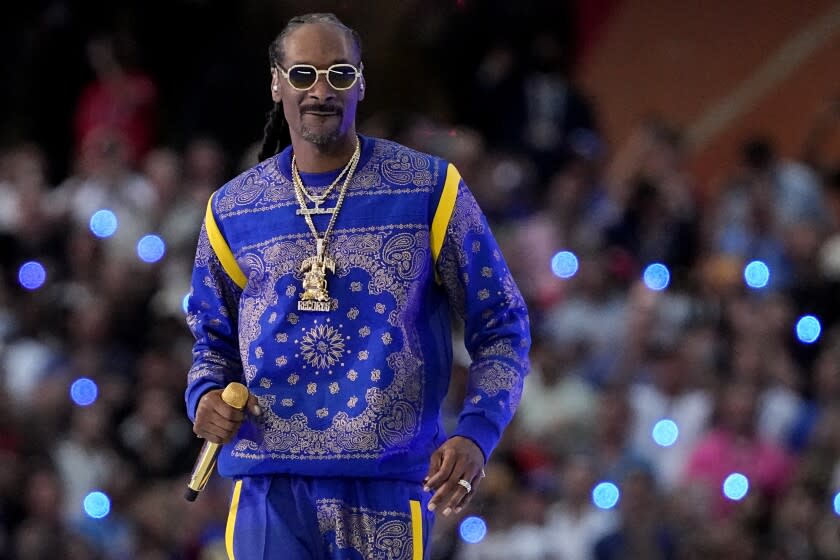 Rapper Snoop Dogg is trying to put an end to a lawsuit alleging that he and his associates committed sex trafficking and sexual harassment, assault and battery.

The famed Long Beach rapper had his legal team file a motion for dismissal on Thursday, arguing that the woman who sued him in February failed to state a legitimate claim against him under federal rules of civil procedure. The woman’s lawsuit, which also accuses Snoop and the other defendants of defamation, false light and intentional and negligent inflictions of emotional distress, as well as a number of labor code violations, “alleges virtually no supporting facts,” his attorneys argued.

The 50-year-old musician, whose real name is Calvin Broadus, has denied the allegations made by the woman, identified as Jane Doe in the filings, and previously said that her lawsuit was an attempt to “extort” him before his high- profile Super Bowl LVI performance.

“She provides no allegations of any statement by Mr. Broadus that he would help her career, no offers or promises whatsoever, and no allegations of any statement about how Mr. Broadus might advance her career,” said the motion, obtained Thursday by The Times. It also accused her of failing to establish an employment relationship at any time with any of the defendants.

According to the complaint, the woman is a professional dancer, model, host and spokesmodel who has worked for years for the “Drop It Like It’s Hot” rapper and a number of his businesses, including the Broadus Collection and his cannabis companies, Casa Verde Capital and Merry Jane Events, which are also named in the lawsuit.

However, Snoop’s team disputes that she was ever employed by the rapper or his companies.

“The plaintiff has named Mr. Broadus’s companies as defendants in part of this alleged scheme, including repeated claims that they ‘assaulted’ and tried to ‘prostitute’ her. However, none of these companies existed at the time of the alleged incident,” a spokesperson for the rapper said in an email to The Times.

“You cannot sue a person or entity for something that happened before they existed,” the spokesperson added. “The lack of their existence at the time of the alleged incident is readily discoverable in the public domain. Nonetheless, plaintiff and her counsel continue to make these false allegations, which only undermine their own credibility.”

She also said she worked as a stage dancer at shows for Snoop and his co-defendant, rapper and former pimp Don “Magic” Juan (born Donald Campbell), and accused them of engaging in “a common scheme of recruiting, enticing and harboring “her and others to engage in sexual activities in exchange for access to employment with them.

The incidents in question allegedly occurred in 2013, and she accuses both Broadus and Campbell of coercing her into oral sex on separate occasions.

Her civil lawsuit makes one federal claim under the Trafficking Victims Protection Act and 11 state law claims – including violations of California’s Labor Code and retaliation and harassment claims that they violated the Fair Employment and Housing Act (FEHA) – all of which Broadus is trying to have dismissed.

Snoop’s motion for dismissal was filed Thursday following a March 16 conference between their lawyers. Before that, attempts to mediate the dispute in early February were unsuccessful.

The case is set to be heard on April 21, when the musician’s attorneys plan to argue for dismissal in front of a judge.

Matt Finkelberg, the attorney representing Jane Doe, declined to comment on the rapper’s latest motion and referred The Times to statements made on behalf of his client in their first amended complaint.

The motion cited three main reasons for dismissal: because the woman “failed to state a claim for relief,” meaning she did not say what kind of redress she sought from the defendants; that she was supposed to bring her time-barred state law claims within one to two years of the alleged 2013 incident and exceeded California’s statutes of limitations by waiting nearly nine; and because her first amended complaint, and its “conclusory, threadbare allegations,” failed to state a claim.

The woman’s first amended complaint, filed March 10, sought unspecified monetary and punitive damages and a jury trial, as well as attorney fees, costs of the lawsuit and “other and further relief as the Court may deem just and proper.”

It also alleged that the rapper’s Instagram post saying “Gold digger season is here” was retaliatory and that she was defamed when a spokesperson for Snoop identified her by her real name in a statement characterizing the lawsuit as a “self-enrichment shakedown scheme.”

The version of that statement obtained by The Times did not include Doe’s real name. However, her name was revealed in a state Department of Fair Employment and Housing complaint filed in December 2021 by her attorney.

According to her lawsuit, the woman alleged that she was taken to Campbell’s home against her wishes in May 2013 after attending one of the rapper’s shows at Club Heat Ultra Lounge in Anaheim. She alleged that Campbell forced his penis into her face and into her mouth at his home. Later, Campbell allegedly claimed that he would see if Broadus would make her a weather girl on “GGN: Snoop Dogg’s Double G News Network” and took her to the recording studio where Snoop films “GGN.”

There, the lawsuit alleged, Broadus accosted her in a bathroom and demanded “a commercial sex act.” She complied because she was afraid for her safety and life, the lawsuit said.

Doe claims in the lawsuit that she was not hired afterwards because she did not “willingly and enthusiastically” give Broadus oral sex. In his motion to dismiss, the rapper’s attorneys argued that her allegations lack any proposed quid pro quo.

She also alleged that she has suffered from various ailments since the events, including anxiety, post-traumatic stress, depression, nightmares, sleep disorders, headaches, emotional distress and more.