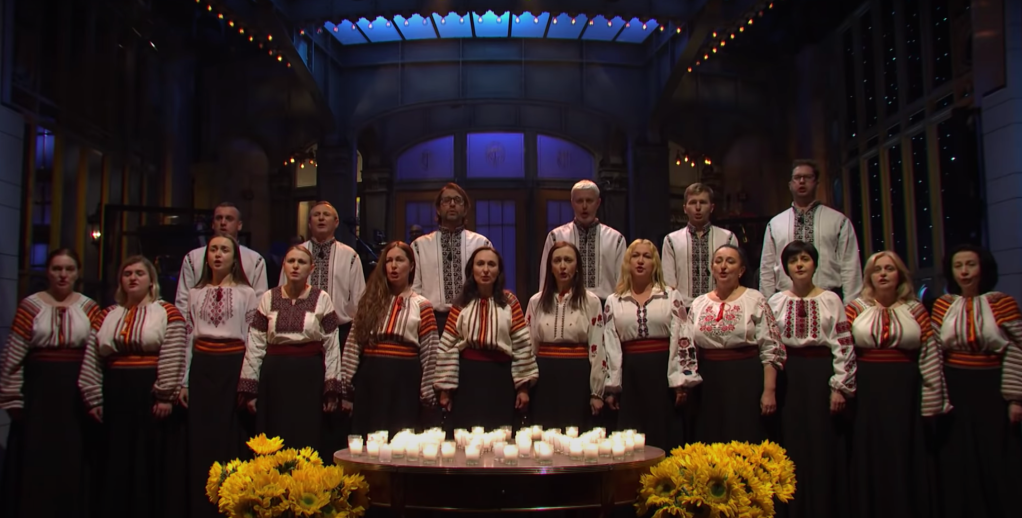 Saturday Night Live opened without a skit. Instead, with the Russian invasion of Ukraine unfolding, the show featured the Ukrainian Chorus Dumka of New York.

Kate McKinnon and Cecily Strong introduced the chorus, which then performed “Prayer for Ukraine” on the SNL stage. In front of the chorus was a table full of candles that spelled out ‘KYIV. ” McKinnon and Strong then returned to shout the signature, “Live from New York, it’s Saturday Night!”

The opening was a rare instance in which the show featured no skit, opting instead for a serious note after a major world event. In the first episode after 9/11 in 2001, SNL featured then-New York Mayor Rudy Giuliani standing with New York police officers and firefighters, and musical guest Paul Simon singing “The Boxer.” Only at the end of the opener was there a moment of levity, when executive producer Lorne Michaels asks Giuliani, “Can we be funny?” “Why start now?” Giuliani responded.

Likewise, with citizens of Kyiv mobilizing to defend their city on Saturday against an expected Russian advance, SNL producers likely chose to go with the opening tribute rather than try to produce a skit that would have appeared tone deaf to the plight of Ukraine.

The chorus was founded in the late 1940s by Ukrainian immigrants, with a mission to “preserve and cultivate the rich musical heritage of Ukraine,” according to the Ukrainian Weekly.