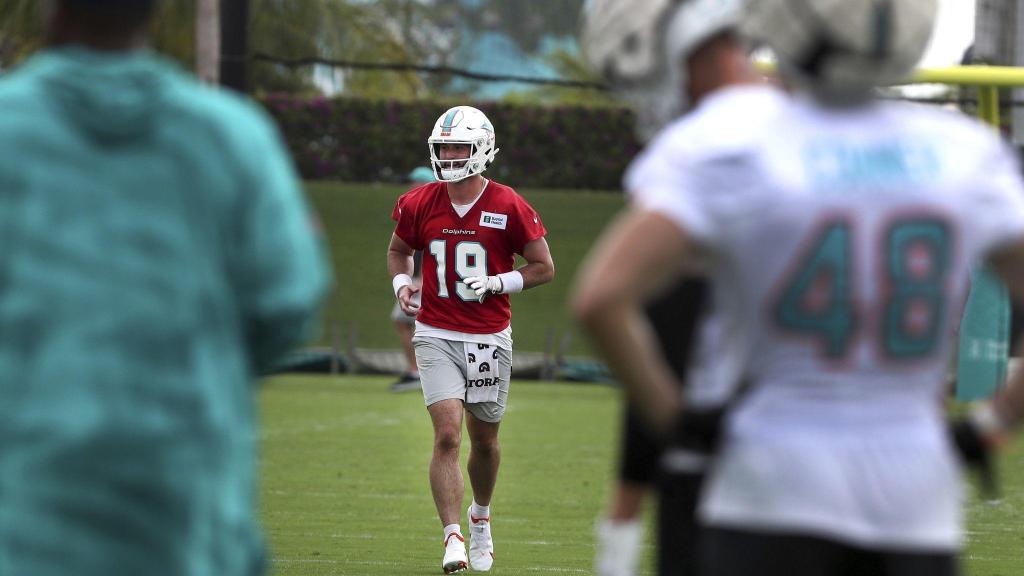 Skylar Thompson had the distinction of being the only Miami Dolphins quarterback who hadn’t thrown an interception during the 11-on-11 periods of training camp entering the day.

The rookie quarterback from Kansas State, who the team selected in the seventh-round of the 2022 NFL draft, had luck onto that streak like a trophy until Saturday.

That’s when Verone McKinley III, an undrafted rookie safety from Oregon, ended Thompson’s run of turnover-free play and he pulled in a pass that was thrown behind receiver Cedrick Wilson Jr.

Despite the turnover, Thompson has put together a series of respectable practices this past week, often times taking advantage of a blossoming chemistry with receiver Erik Ezukanma, a fellow rookie who has regularly produced at least one big play each day.

During Saturday’s practice Thompson and Ezukanma connected on a long touchdown on a play where Thompson threw it the length of the field (45-yards) while rolling to his left. Cornerback Tino Ellis was in good position to make the play, but the pass from Thompson was perfect and shows how much growth he’s made in Miami’s offense.

What has been the biggest adjustment from college to the NFL for Thompson?

“The [defensive backs],” Thompson said. “In this league, as I figured out, if you’re not on time, it’s most likely going to be an incompletion because the separation of being open is way different.

“Being able to throw the ball before guys are out of their break, being able to anticipate. I feel I’ve gotten better at [it], but there’s always room for improvement. It’ll come.”

The Dolphins defense was working on blitzes, exotic looks and pressures during Saturday’s practice and those plays created some problems for all three quarterbacks. …

Cornerback Xavien Howard dropped a potential interception in the red zone during Miami’s situational period. Howard has been practicing more and more during the 11-on-11 period, getting situational work in. And his one-on-one battles with Tyreek Hill have been epic. Even Hill acknowledged he’s tired of facing Howard, saying “he’s been locking me up.” …

Cornerback Noah Igbinoghene had a tackle for loss on a red-zone quick hitter to Hill during Miami’s situational period, where down-and-distances recreated game-like situations.

Outside linebacker Melvin Ingram stuffed tailback Raheem Mostert in the backfield for a 1-yard loss, and continued to showcase himself as a forceful edge setter — and one of the team’s best edge rushers. …

Tailback Chase Edmonds fumbled away the football on the first 11-on-11 snap of practice.

The Dolphins had five troublesome center-to-quarterback snaps or exchanges, which has been a running theme of practice this past week.

Receiver Jaylen Waddle continued his series of strong practices, which included a 25-yard toe-tapper from backup quarterback Teddy Bridgewater, and a touchdown pass he caught from starter Tua Tagovailoa in the middle of the field over a diving Igbinoghene. Waddle also caught a touchdown pass, converting a third-and-5 from the goal line, during the final series of 11-on-11, beating undrafted free agent cornerback Kader Kohou on the play.

Receiver Braylon Sanders dropped a touchdown pass where he was wide open downfield. But the rookie from Ole Miss has had a strong camp, becoming one of the top performers in the rookie receiver room. However, consistency is what’s going to take to earn the 6-foot-1, 194 pounder a ticket on Miami’s 53-man regular-season roster as the fifth receiver, and that means he can’t have down days like Saturday.

Left tackle Terron Armstead participated in his second straight day of 11-on-11 periods, and is clearly ramping up his practice participation coming off the knee injury that had him sitting out the entire offseason. c

Mostert participated in Saturday’s session, getting a significant amount of work during Miami’s team period. …

Safety Shedrick Redwine and punter Thomas Morstead did not practice because of undisclosed injuries.