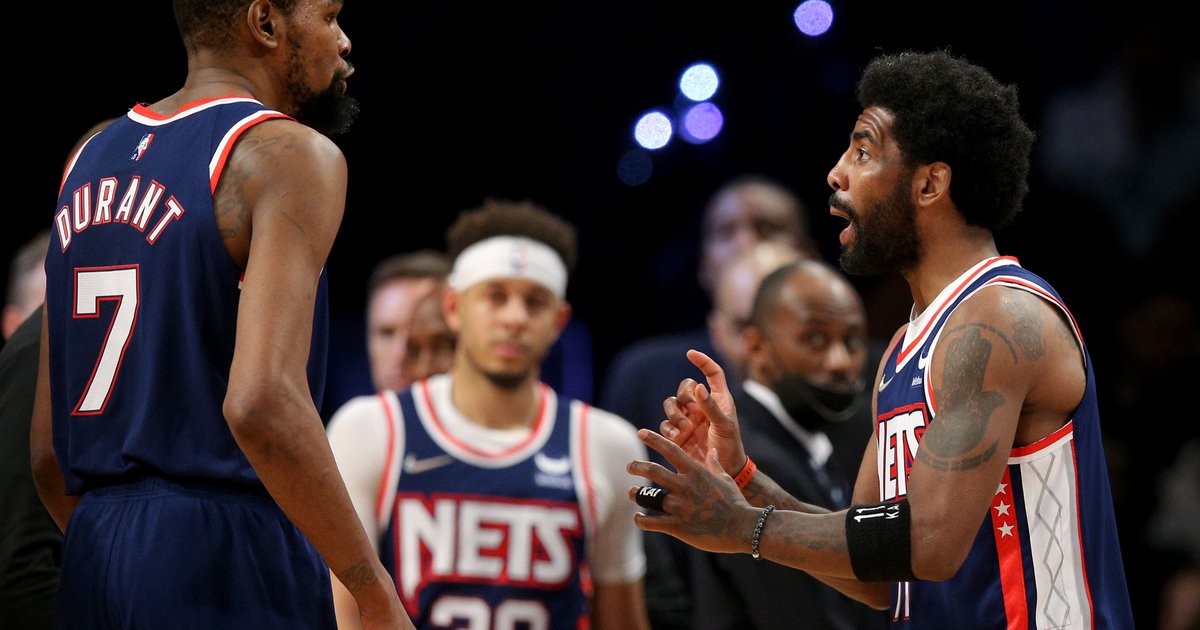 Hours before the 2022 NBA Draft, Kevin Durant and Kyrie Irving decided to shake up the NBA landscape by making their intentions clear. Either the Nets find a way to resolve the situation with Irving, or they could be looking at both stars making their way to the exit door before next season starts.

Within moments of one another, ESPN’s Adrian Wojnarowski and The Athletic’s Shams Charania dropped reports on the two stars at the top of Brooklyn’s depth chart, each concerning the other half of the partnership:

Sources: Kevin Durant is monitoring the Brooklyn Nets’ situation and considering options with his future.

This now opens the path for Kyrie Irving to proceed on finding a new home via opt-in and trade.

ESPN Sources: If Kyrie Irving can not reach an agreement to stay with Brooklyn, he has a list of teams he’d like them to consider on sign-and-trades, including Lakers, Clippers, Knicks, Heat, Mavs and 76ers. None of those teams have cap space to sign him without Nets’ help.

What, do you mean staying behind to play with Ben Simmons isn’t a big enough draw for one of the best basketball players on Earth?

Pettiness aside, this is a monumental moment in the immediate future of the league. Durant had a brutal first-round series against the Boston Celtics this year, and he is (quietly) nearly 34 years old with some significant injuries in his not-so-distant past. There are legitimate questions about whether he can be in that very top echelon of players anymore, at least on a regular basis, as he deals with nagging injuries and the weight of returning from the previous devastating injury.

On the other hand, Durant is one of the single greatest players to ever touch a basketball, and if he becomes available, every team with anything even remotely valuable to trade will be looking to throw offers at the Nets to secure his services. With Durant under contract into his late 30s, you could conceivably acquire one of the game’s all-time great scorers with plenty of points left to drop on opposing defenders. He is borderline unguardable most of the time, his length so preposterous that teams can only get near his airspace as he rises up to can jumpers. And as the years have gone on, he has gotten better and better at harnessing the value of his scoring / shooting ability from all over the floor and using it to impact the game all over the floor. He was a terrific, versatile defender for the Warriors at their zenith, averaged more assists last season than in any year of his career, and he is insanely efficient by normal standards spirit based on the attention teams shade his way. He is inevitable, to borrow from Thanos.

That is precisely why the Sixers have a snowball’s chance in hell to acquire him. Maybe Daryl Morey can craft a resilient snowball, and cobble together a package that features a potential star-in-the-making in Tyrese Maxey. Certainly, if that’s what it took, this is the sort of deal that qualifies as one where the Sixers might budge from their “near untouchable” label for Maxey. Assuming you can smooth over hostilities between Harden and Durant after the former’s not-so-diplomatic exit in Brooklyn, you would have top-end talent to rival any team in the league, depth issues be damned. But ultimately, other teams likely have more ammunition and more avenues to put together a package than the Sixers do. He may be a part-owner of the Philadelphia Union, but if you’re going to place a bet on KD coming to Philly, do not bet the house on it.

But hey, if you want to dream, remember this moment from last season for a quick second:

So that leaves us with, well, the more “interesting” person in Brooklyn’s starry duo. I do not think there’s a player in the NBA who inspires a wider range of reactions than Kyrie Irving, for reasons that do and do not have to do with basketball. This was the case long before he was openly floating flat-earth theories, rejecting the concept of the NBA’s bubble return, or foregoing getting vaccinated. Even as a simple basketball prospect, there was plenty of debate over whether Irving should be the No. 1 pick in his draft class because of how few games he appeared in that year. It turned out to be a waste of a debate, at least on a talent basis, as Irving has more than proven he had the chops to rank at the top of draft boards back then.

As a basketball player, there are few guys who dazzle quite like Irving does. It’s not just that he’s an excellent player, it’s that he inspires a level of devotion with the artistry of his game. He has frequently been called one of the best ballhandlers of all time and one of the best finishers (size relative) to ever step on a basketball court. Watch him at his best, and you understand why. He can go on runs where it looks like he’s tossing up junk and it all falls anyway, even using absurd degrees of English to want the ball into the basket. He has a mixtape handle with professional-level utility, style and substance all at once. He is an elite shooter in every sense of the word, a player who you can not sag off from or forget about for a moment without being punished for it. Maybe he’s not a “pure point guard” in the sense that he does not rack up high assist numbers, but he’s an example of the modern point guard, a scoring wizard who opens the floor up with his mastery of the craft.

If it was only about the sport and what happens between those lines, the only marks against Irving would be for health issues and his defensive apathy. He has appeared in 60+ games just five times in 11 seasons with a variety of issues, making him a tough player to build around on his own and a tougher one to consider as a partner to a guy like Joel Embiid. Defensively, you know what you’re getting from Irving, and it’s not much, though that has been the case for most of Philadelphia’s recent players on that end, and those guys had a lot less to offer on the other side of the ball.

The problem with Irving, though, is not confined to a single choice. He is not “controversial” or “hated” simply because he would not get vaccinated last season. As a matter of public record, it was not even the only reason in the last two seasons that Irving fell off the face of the Earth and did not play basketball. Under the banner of family and personal reasons, Irving missed seven games in the winter of 2021, doing so in a way that caught the Nets off guard. In fact, the first missed game was on January 7th against the Sixers, with head coach Steve Nash noting he wasn’t sure why Irving was missing / that the two men hadn’t talked about it. During that absence, Irving managed to pick up a $ 50,000 fine when video surfaced of him attending a birthday party with no mask, in violation of protocols at that time, and then ate another $ 800,000 + in fines for a mandatory quarantine after that.

The reason Irving is so polarizing, to put it as nicely as possible, is that he marches to the beat of his own drum. The problem in NBA terms is that he does so in a way that places him (intentionally or not) above the accountability to teammates that other players have. Just like with Matisse Thybulle, we do not have to discuss his absences and decisions through the lens of public health. Irving’s decisions have made him unavailable to teammates as a product of his own decision-making, and they have played a part in the Nets falling wildly short of expectations. Where chemistry should have been built, there was an absence of work and sweat equity. It has left the Nets weary of the idea of ​​investing in him long-term. Given that this is the guy who once walked away from a chance to continue competing for titles with LeBron James, it is understandable for anyone to have reservations about trusting him as a long-term, foundational piece.

On some level, I have more sympathy for Irving wanting a new challenge rather than wanting to be LeBron’s sidekick while still at the peak of his powers. The issue is that in the years since, his actions have not been suited to being that frontline, top-of-organization player and person who everyone else can follow. If you want and seek out responsibility, that can be spun as an admirable trait. But owning it is something else entirely, and Irving’s track record speaks for itself on that front.

The question is whether you can shelve all of that and focus on the carrot on the end of this stick. The Sixers do not have many paths to acquiring a talent like Irving, Daryl Morey is a gigantic believer in star power over all else, and as a potential opt-in and trade candidate (not to mention all his baggage), Irving will come with a much lower price tag than Durant. As such, there will be questions about whether it is in the Sixers’ best interests to go get him and figure out the headaches as they come. The first one, naturally, would be figuring out whether he and Harden could stand in a room together without Harden rolling his eyes so hard that they leave his body entirely and traveled into another dimension.

I am open to differences in opinion on the subject, but to me, Irving is the antithesis of the sort of person you win with in a team sport. An NBA championship is a marathon journey that simply culminates in a Finals series, and requires a level of dedication to one another that is hard to put into context for the bog-standard employee in another line of work. Irving cannot be accused of lacking buy-in or ability when the ball goes up and you have 48 minutes to win or lose, but as an institutional pillar, he has never shown an affinity for being a guy you can count on to steward a franchise .

And frankly, it would be easier to accept that and bring him in anyway if somebody else in this core group was that guy. But for various reasons, it’s not clear the Sixers have that guy. Embiid’s body betrays him at the worst times, leaving him helpless in some regards, and his honesty (while refreshing and useful for me personally) often goes just a bit too far as the face of the organization. Harden has been the face of some very good, even great teams during his career, but he too has to prove he can turn a legacy of regular-season results into something durable enough to withstand the playoff pressure cooker.

Until and unless this situation gets settled, expect to hear the Sixers (and most of the league, for that matter) tied to one or both of these guys. They exist on a talent tier that makes their potential availability impossible to ignore even if they’s out of price range or not of much interest for, well, the reasons above we discussed. Just count me as a dissenter on this one.