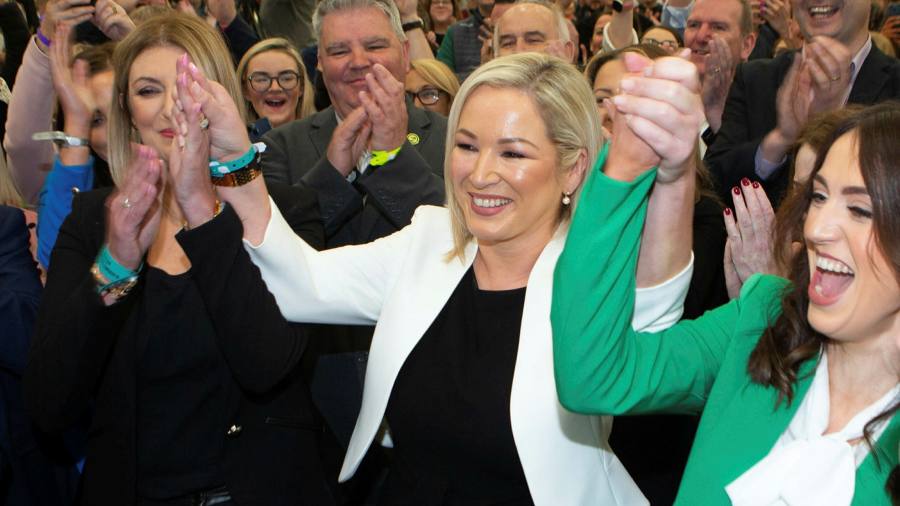 Sinn Féin appeared on course to pull off predictions of a historic victory in Northern Ireland’s elections in what would mark the first time the nationalist party, committed to Irish reunification, has outperformed unionists in the region.

Michelle O’Neill, Sinn Féin’s leader in Northern Ireland, looked relaxed on Friday as she easily held her seat in mid-Ulster, to cheers from supporters. “I feel very positive,” she declared. “We said this was an election about the future. It is going to be potentially a historic election. ”

The centrist Alliance party was also confident it had delivered a strong showing in Northern Ireland’s elections held on Thursday, underscoring how many voters no longer accept traditional tribal unionist and nationalist divisions.

Full results are expected to trickle in throughout Friday and into the weekend.

If pre-election opinion polls are correct, a Sinn Féin win would relegate the Democratic Unionist party, the largest party committed to preserving the region’s place as part of the UK, to a humiliating second place behind a party long associated with the republican paramilitary IRA .

But whatever the outcome for the 90 seats in the Stormont assembly, when the final tally becomes clear, one thing appears certain: the region’s devolved executive is unlikely to return for months.

The DUP has said it will boycott the power-sharing body unless post-Brexit trading rules for the region, which put a customs border in the Irish Sea, are scrapped.

A DUP refusal to form a new executive next week would open up the prospect of months of political limbo in Northern Ireland and even another election at the end of this year or early in 2023. Ministers would stay on in a caretaker capacity but no new policy could be enacted.

“I voted for Sinn Féin,” said Rose McKenna, 67, a retired social worker who has backed the nationalist Social Democratic and Labor party and the Alliance in past elections.

“It’s more about who you do not want in than who you do. We need to get [the executive] back and do something to fix this place. I’m fed up with the old arguments. ”

The Alliance, meanwhile, was confident it would leapfrog the SDLP and Ulster Unionist party to move into third place from fifth in the last elections in 2017.

Doug Beattie, leader of the UUP party, which had been the fourth largest in the outgoing assembly; and Greens party leader Clare Bailey, were under pressure to retain their seats.

In many cases, final results will be determined by how voters assign their second and subsequent preferences under Northern Ireland’s proportional representation voting system.

DUP leader Sir Jeffrey Donaldson, who was elected to assembly, will have to resign his seat at Westminster to enter Stormont. He told the Financial Times he was “always confident”. His party could benefit if voters from the small, hardline Traditional Unionist Voice party transfer their preferences to it.

While O’Neill focused her campaign message on the cost of living crisis, Donaldson has vowed not to take his party back into the region’s executive as long as the Northern Ireland protocol remains in place.

But even some DUP voters criticized his stance. “They should go back. You should always talk everything out, ”said John Madden, 63, a laborer, carrying bags stuffed with red, white and blue bunting and Union Jacks for a street party for Queen Elizabeth II’s platinum jubilee in June.

UK Prime Minister Boris Johnson, who suffered bruising defeats in local elections in Britain on Thursday, has been preparing legislation to allow the UK to unilaterally rip up parts of the protocol, potentially triggering a trade war with Brussels.

Still, many voters expect the DUP to boycott the power sharing body. “There’s going to be an empty building up there [at Stormont], ”Said Alisha Hill, a 37-year-old hairdresser and single mum who did not vote. “I think our politics are pretty laughable here.”

Alliance leader Naomi Long said the expected rise in support for her party highlighted the need to move beyond traditional divisions.

Under the 1998 Good Friday Agreement, which halted the three-decades-long conflict between Republicans seeking to claim Northern Ireland and loyalists battling to remain British, Northern Ireland’s main unionist and nationalist communities must share power.

Politicians elected to Stormont must next week officially designate themselves as “unionist”, “nationalist” or “other”. Even if the Alliance does well, the “other” camp is still expected to remain considerably smaller than the two traditional communities.