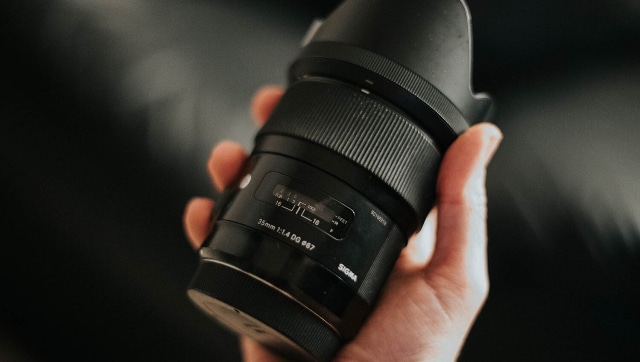 Even a decade ago, taking photographs meant having a dedicated camera — be it a point-and-shoot gadget or a full-fledged professional kit. But now, with nearly every smartphone sporting a capable camera setup boosted by computational photography, how do companies that manufacture cameras, such as Nikon, Canon, etc, keep up? Well, according to Kazuto Yamaki, CEO of SIGMA — one of the world’s largest camera lens makers — dedicated camera kits still hold the edge.

Yamaki, who recently visited India to take stock of SIGMA’s business here, said professionals, advanced amateurs and hobbyists will always prefer shooting on a professional camera kit to a smartphone.

One big reason smartphones are seen as catching up with DSLRs — at least in terms of instant image quality — is the under-the-hood wizardry that is known as computational photography. Basically, the smartphone’s imaging processor uses software to enhance the photographs regardless of the actual quality of the lenses.

He likes computational photography
One might think professional camera-makers scoff at software giving photographers a leg-up, but Yamaki says he is actually in favour of using computational photography to enhance image quality. “Smartphones use technology aggressively in their image creation, which has improved image quality significantly. I think high-end cameras and lenses should use similar technology that smartphones use,” he said.

To prove his point, he said SIGMA already has mirrorless cameras in its line-up and will continuously release newer products using such technology more aggressively. “Our target customers are photo/imaging enthusiasts, including professionals and amateurs. Our goal is to satisfy all such customers with the best quality products and services,” he said.

SIGMA’s market in India has grown at a scale of 20-25 percent over the last three years. This year itself, it has seen a growth of at least 20 percent. The lens maker introduced SIGMA Global Lenses in 2012 and it comprises three lines — art, contemporary and sports — with 48 lenses in total. It also launched its CINE lenses in 2016, which include 25 lenses under the categories of FF zoom, high speed zoom, FF high speed prime and FF classic prime.

India is one of the top 10 markets for SIGMA globally. SIGMA’s prime lenses sell the most in the Indian market, the art series lenses made for mirrorless cameras have the largest market share compared to other products in India.

“We do some OEM business, it’s not our main area of work, and is just a small part of our business,” he explained.

Focus on India
Yamaki had initially planned to visit India in 2019, but then a typhoon hit his country. He postponed it to 2020, but then the COVID-19 pandemic broke out. So he was finally able to make it to India in October, 2022, and based on his visit, is quite pleased with the India story — so much so, he says, that they have plans to expand here.

“Yes, we definitely have plans to increase business in India. At present, SIGMA’s Indian market is increasing dramatically,” he said, adding that India is one of the top 10 markets for SIGMA globally.

However, that does not meet the company is necessarily focusing on increasing its physical footprint.

“We have a reliable and trustworthy partner in India already, so we don’t have the plan to increase the distributors. Together with the current distributor, I believe we can effectively expand our business in India. Having said that, we will focus on the quality of the products and services rather than increasing the volume. As long as we maintain and deliver high-quality services, the volume should follow,” he added.

A family-run business
SIGMA manufactures 100,000-900,000 units per year from its factory in Aizu, Japan. A family-run business, Yamaki said in the 90s or early 2000s they could have moved manufacturing off-shore for lower labour cost, but they decided to stay in Japan to enhance the quality of the product. “Analogue technology requires a lot of experience in the people, so we really need people who have worked for the company for many years. So we decided to stay in Japan,” he said, adding that they decided to remain in Japan also to protect their employees’ jobs.

Surviving the chip shortage
Being a family-owned business, how did Sigma tide over the semiconductor shortage, which is only just showing signs of easing?

Talking about how the lens maker tided over the semiconductor shortage, Yamaki said that the suppliers, with whom the company has good relations for many years, prioritised SIGMA. “Also, the engineers worked hard. If we found that some semiconductor (component) will not be available for a long time, they worked hard to change the design to be compatible with alternative parts. So we did everything to survive in such conditions,” he explained.

Yamaki said it was very challenging and the situation is improving a bit. “Compared to other countries we did better. We have a relatively flexible production system,” he said.


How to Choose the Best Fundrise Strategy