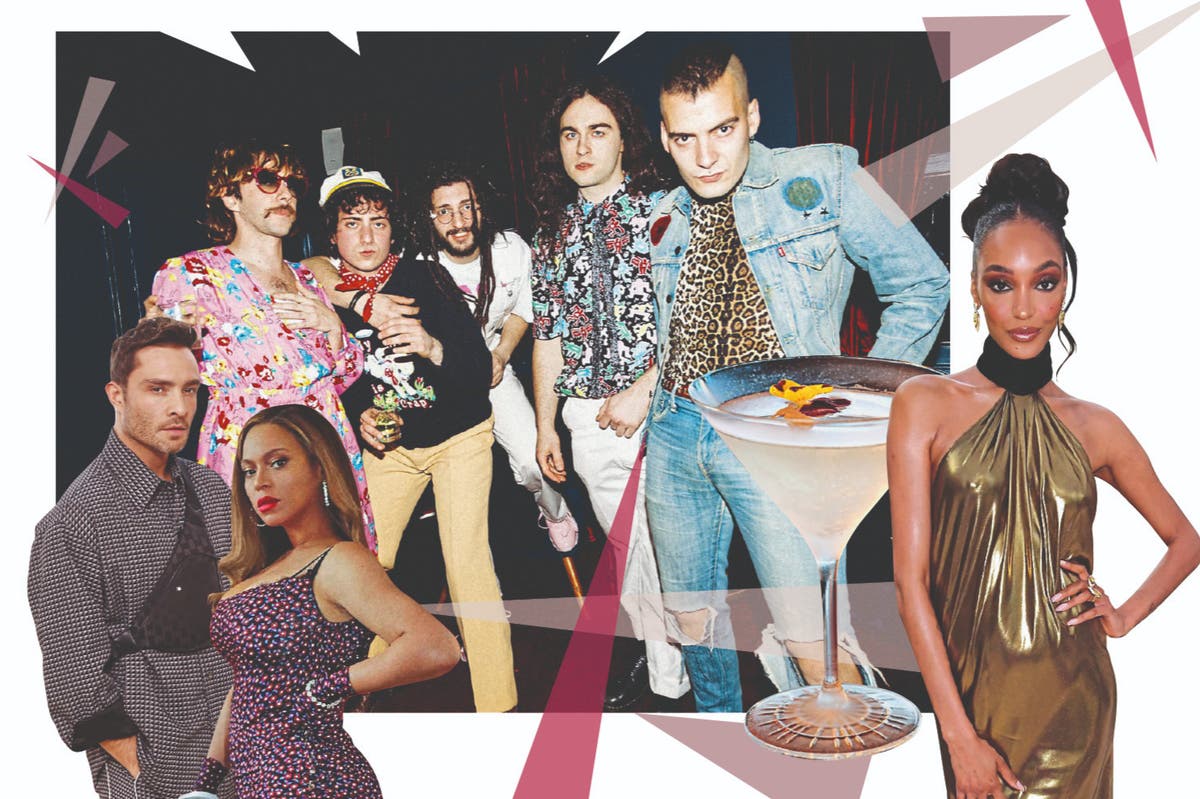 he Instagram It-Girl of the summer? Kate Moss. While the supermodel is apparently very much on the wagon these days, snaps of her Nineties heyday have lately been going viral on social, with her looking equally beautiful and bleary-eyed, cigarettes and booze in one hand, either Johnny Depp or Pete Doherty in the other.

And while no one wants another round of troublesome exes, the glorification of Kate’s Wild Years points to one thing only: the world is finally remembering what it’s like to have fun. Less hot girl summer, more shot girl summer. Here’s where to head to indulge that hedonistic streak.

It’s time to raise a glass to, well, raising a glass. Of the old-school places, try Le Beaujolais (WC2H, lebeaujolais.london): it is somewhere for too much wine and pastis and a feeling like Litchfield Street might be a back alley in Paris after all. Upstairs is open to all, while its notoriously private downstairs club is rumored to have served Brad Pitt (unlikely) and Beyoncé (wildly improbable) – but stranger things have happened. A more modern mantra can be found at the Arcade Food Hall (WC1, arcadefoodhall.com). It reopened a couple of months back with coasters on the central bar proudly bearing the legend “bored of wellness”. And honestly, by now, who isn’t? Probiotic mindfulness can do one. Cocktails, all about a tenner, are listed variously as being ideal for “the first drink of the day”, an “all-day party” or “late night”. In other words, Arcade is set for all hours. Upstairs at Luke Farrell’s scorching southern Thai Plaza Khao Gaeng, the Lageritas have been the hit, while the Johnnie Walker highball at £ 8 is a head-spinning bargain. Restraint? Never heard of her.

While most of London’s dedicated drinking dens shakily knocked back their last vodka tonics as the millennium blearily came into view, one or two have survived. Does Gerry’s Club (W1D, 020 7437 4160) in Dean Street really exists, or is it just a drunken example of the Mandela Effect? Hard to really say, but the set of regulars who go until 3am every night – among them journos, fashionista types and hospitality hoi polloi – swear by the place for its decent drinks at fair prices and terrific live music. Gerry never existed; you may feel you do not either the morning after, too. Similar is Greek Street stalwart Trisha’s (W1D, @trishas_soho). A more modern way of doing things is at newcomer Louche, which is nearly opposite (W1D, louchesoho.com). The raffish name says it all; the two-storey cocktail bar specializes in live music and late nights, and shuts at 2.30am every Wednesday to Saturday.

The fact that Bradley’s Spanish Bar (W1T, bradleysspanishbar.com) in Hanway Street is actually a pub telling you everything you need to know about its muddled mind; it shuts around midnight but next door is terrific underground cocktail spot, Murder Inc (W1T, murderinclondon.com), where cocktails are strong, cheap, staff know their stuff and good times are always had. Closing is at 2am on the weekends. Around the corner on Berwick Street is NQ64, open until 3am (W1F, nq64.co.uk). Themed for old arcade games, it’s a dizzying trip walking into its neon lair. After a really, really late night? Canning Town’s FOLD (E16, fold.london) is the only club that reliably and regularly stays open until daybreak. Clubs, though, are a whole different ballgame: check out our fresh guide to the best.

Putting on the glitz

Going full tilt needn’t be all Charles Bukowski bars. Hedonism is about seeking pleasure, not necessarily over-indulgence. Pre-dinner Martinis have suddenly reappeared as the drink of the day. The rule about them is easy enough: one is too few, three is too many. In Canary Wharf, underneath the latest Hawksmoor, the Lowback (E14, thehawksmoor.com) is a killer new bar for them, with top food in the restaurant upstairs. Otherwise, the best are found in the American Bar at the Stafford (SW1A, thestaffordlondon.com), which has a new American-leaning menu from executive chef Lisa Goodwin-Allen, or in the unflappable Connaught Bar (W1K, the-connaught.co.uk), or the Amaro Bar (W8, amarobar.co.uk). Ask for Dec’s Martini there, named for cocktail titan Declan McGurk. Vodka reliably serves up less of a hangover than gin; drinking less does better still. Mini-martinis are the under-the-counter, off-menu thing at sort-of diner Rita’s (W1F, ritasbarandkitchen.co.uk), while Tayēr + Elementary (EC1V, tayer-elementary.com) is famous for its One Sip martinis. They are the ultimate shot.

Otherwise, put a note in the diary for early autumn, when a new St John opens in Marylebone Lane (W1U, stjhnrestaurant.com); it is Fergus Henderson and Trevor Gulliver’s first new place in seven years and as befits its owners, it is embracing a life of good living. Glasses of Fernet Branca can revive even the weariest. The breakfast special will be donuts with Champagne. Speaking of, just last week Moët & Chandon opened a dedicated fizz bar at Harrods (SW1X, harrods.com); the room shimmers with gold-like bubbles in a flute.

Such glitz is a must for living the high life: a dash of celebrity always helps. At present, the Twenty Two just off Grovesnor Square (W1K, the22.london) is the place to be seen: lately Jourdan Dunn, Ed Westwick and Rita Ora have all been spotted among its blue, wood-paneled dining room. The other place drawing the big names is the Pelican in All Saints Road (W11, thepelicanw11.com): it’s a posh pub, so indulgence is at your own pace, likewise dressing up, but look around – apart from three-Michelin star chef Pierre Koffman, Ellie Goulding and Margot Robbie have been in. Finally, if you’re the sort that wants to party but, er, also sleep, the art of the long lunch is a fine thing to master. There’s a full how-to guide here, but if you’re wondering where to kick things off, skip the vegan Honest Burgers – news came yesterday it has shut amid little demand – and instead try Jackson Boxer’s places: both Orasay spirit Brunswick House have recently held feasts that have stretched through an afternoon and into the evening and it’s rumored more may follow. If you’re out late, Boxer’s Chinatown bar Below Stone Nest (W1D, belowsoho.london) is just the place for an elegant nightcap: open until 2am Wednesday to Saturday, it looks something like the basement equivalent of Sessions Arts Club, has a live jazz band killing it and serves drinks for £ 8.50.

Life is a cabaret

While the cabaret sector has wobbled, steadying itself post-pandemic, the stage lights are now burning brighter than ever. At the eye-widening end of the scale, the Box in Walker’s Court (W1F, privilege-entertainment.com) has found itself back in vogue after it hosted the Brits afterparty: go to watch – well, look, I can not really say; find out for yourself. Speaking of common decency, there’s an underground bar of that name at theNoMad (WC2E, thenomadhotel.com), where they promise “unscripted surprises” – drag cabaret tends to be the thing. Over by Piccadilly Circus, inside Brasserie Zedel’s Crazy Coqs (W1F, brasseriezedel.com) next month launches Halcyon Nights, promising Fifties-style glam, with West End star Joanna Woodward hosting.

Meanwhile, just off Berkeley Square, Chinois Club (W1J, parkchinois.com) is likewise reviving its cabaret act with the aptly-named Show Reborn: 23 acts play every Wednesday-Saturday until 2am. Wilder, though, is likely to be Christabel’s, beneath the Windmill Theater (W1T, christabels.uk); it’s promising high-living (Michelin-starred food, live bands, cigars and Champagne), but it’s the burlesque that should give the place its reputation. There is, too, a sense inhibitions aren’t especially welcome: former Primal Scream and Oasis manager Alan McGee, a regular at its old spot in Fitzrovia, says: “The only difference is, in the Eighties this place would have an orgy. ” Perhaps be grateful its 2022 after all.

That’s not to say, moving away from cabaret, that there aren’t plenty of sex-positive parties. There’s quite a few operating in a queer-friendly way: the biggest kink party at present is Crossbreed (crossbreedworld.com), which is proudly as progressive as it is (consensually) pervy, but check out Oliver Keens’ full guide to all the fun, including Meat, Thorn, HTBX and HOWL. After all, to wreck a Rita Mae Brown line, the only reason to be alive is to enjoy it.