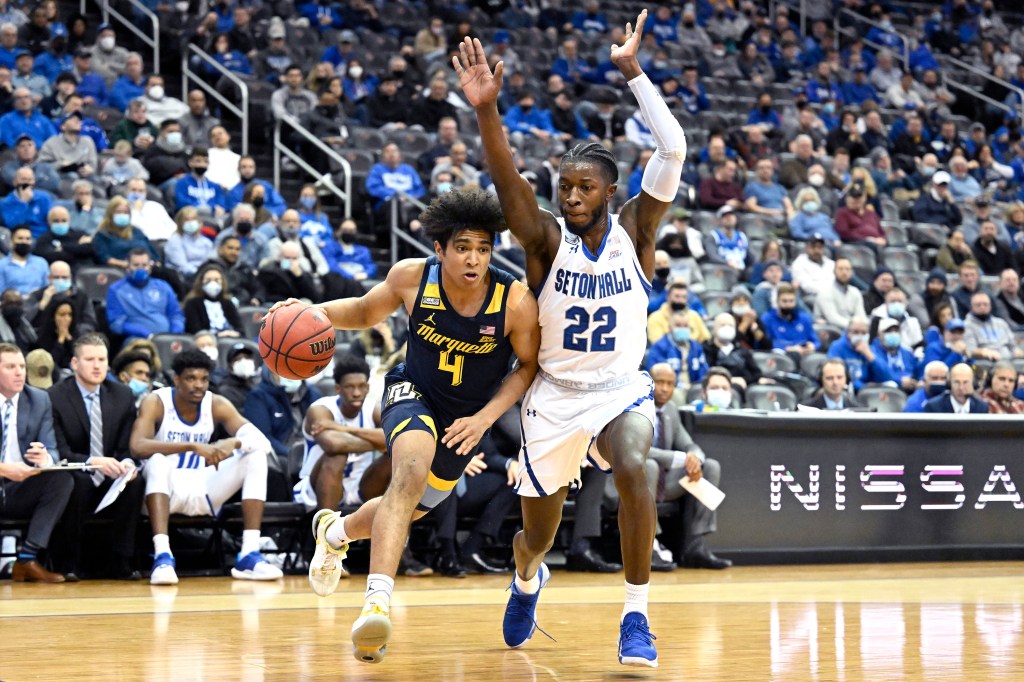 Seton Hall can point to the lengthy COVID-19 break that interrupted what had been a strong season. The Pirates can also single out the recent injury to Bryce Aiken or a number of other unfortunate factors.

But as February nears, this isn’t the same team that was a top-25 fixture just a few weeks ago. Seton Hall is trending back towards the NCAA Tournament bubble, getting worse instead of better.

Two days after getting whipped by St. John’s, the Pirates were not much better against No. 22 Marquette, and they were beaten soundly Wednesday night, 73-63, at Prudential Center in Newark.

The Pirates trailed by 20 points early in the second half, could not sustain a brief run and were never really in it down the stretch. Seton Hall (12-6, 3-5 Big East) has now dropped four of its past five games and heard boos at home for the first time in years. Marquette (14-6, 6-3) stifled Seton Hall’s offense around the basket, while the Pirates’ defense was inconsistent and lacking focus.

Aiken’s continued absence, following a concussion, has shone a light on the team’s offensive limitations. It has forced major minutes upon Kadary Richmond, the Syracuse transfer, who committed six turnovers on Wednesday and has 17 in his last three games while shooting 7-for-36 from the field. Senior star Jared Rhoden hasn’t stepped up, either. He was limited to 14 points on 5-for-17 shooting against the Golden Eagles and passed up multiple chances from beyond the 3-point arc.

The Pirates did not have an answer for Marquette star Justin Lewis, who poured in 33 points as the Golden Eagles won their seventh straight.

One positive for Seton Hall was Jamir Harris, a transfer from American. He scored 16 points off the bench, providing a needed spark.

An ominous tone was set on the game’s opening possession. Ike Obiagu slipped to the basket for what looked like an open dunk. But Kur Kuath sprinted over to reject the 7-foot-2 center’s shot. Kuath had four blocks by the first media timeout, and Marquette was on its way to building a huge lead.

Seton Hall started by missing 19 of its first 23 shots, and found itself down 26-10 with 7:27 left in the opening half. Rhoden began 0-for-8 before snapping his shooting drought with a jumper in the lane. He had been 0-for-13 going back to the loss Monday to St. John’s.

In the span of just over a minute, Seton Hall coach Kevin Willard called two timeouts as the deficit continued to widen.

Those timeouts did not fix any problems. Marquette led 38-21 at the break, as the Pirates had just one fewer turnover (seven) than made field goals (eight) and shot a dreadful 24 percent from the field. It did not get much better in the second half, outside of a few brief stretches.

At least Seton Hall has a week off now before visiting Georgetown. The Pirates need time to fix their many problems.