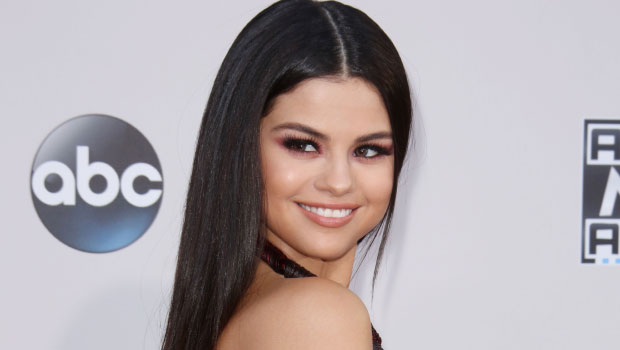 Selena Gomez is known for her stellar style, chart-topping songs, and A-list relationships, but super fans may also be familiar with the various tattoos that cover her body. Most of them are small and barely noticeable, but some of the ink, like her most recent dripping pink rose on her back, is large and colorful, demanding our full attention!

Below we break down all of Selena’s 16 known tatts (there could be more she’s hiding!) and give a little background on what went into the “Ice Cream” singer’s decision to take on the designs.

Selena debuted the ink on her right wrist in 2012 and fans originally thought it was a tiny black heart. While attending a pre-Oscars party, the then-19-year-old told Access Hollywood at the time, “Everybody thought it was a heart for some reason, but music is a big influence in my life.”

“I was named after a singer, I’m a singer and a lot of other personal reasons,” she explained, referring to famed, late Texicana singer, Selena Quintanilla-Perez.

No one currently knows when Selena got this delicate, lowercase “g,” but she ended up confirming in a 2015 interview with Refinery29 that the “G” stands for Thank youaka her half-sister who was born in 2013.

“God Who Strengthens Me”

In addition to her music note, Selena got her third tattoo on her thigh sometime in 2012, but she kept it a secret from the public for more than a year.

“I’ve done a pretty good job of hiding it,” she said told Ryan Seacrest during a 2013 radio interview after fans noticed it after the “Wolves” singer was photographed at the beach. Selena explained to Ryan that “God who strengthens me” is an altered excerpt from her favorite Bible passage, Philippians 4:13.

Selena’s “LXXVI” tattoo – the second she got in 2012 – is the number “76” in roman numerals and is another shout-out to a family member. The Only Murders in the Building star got the ink from the famed New York City-based artist Keith Scott “Bang Bang” McCurdy. “The tattoo was a tribute to a family member who she said means a lot to her,” the artist told the Daily Mail.

A year later, Selena then shared a photo of the design with the caption, “1976.” Although she never explained the exact meaning of the tatt, it was a presumed to be a tribute to her mother, Mandy Teefeywho was born in 1976 and was just 16 years old when she gave birth to Selena in 1992.

Selena returned to Bang Bang again in 2014, then opting for another saying – this time on her right upper back. “Selena already had it written out how she wanted,” he told E! News at the timeadding, “she had been wanting this one for a while.”

“We played with it a bit laying it out, until we found the perfect spot,” he said. “She loved it; she flipped out. ”

Although it’s not exactly clear when Selena got this tattoo, fans began spotting its faint outline on the former Disney star’s hip back in 2015 when she was photographed at the beach. Many fans and and media outlets presumed it to be the sacred “Om” symbol, but Selena clarified to Refinery29 that it’s actually another date, as the writer paraphrased it to represent “when she met one of her best friends eight years ago.”

A year later, Selena posted a photo of a temporary tattoo sheet with replicas of her own ink, and the symbol in question looked like “X,” “3,” and “1” combined into a curly-like font.

Although Selena did not confirm exactly when she got the tattoo “Sunshine” on her right foot, it must have been sometime before April 2016, as it was included on her temporary tattoo sheet.

She has never spoken about the tattoo’s meaning, but once in 2016, she referred to her grandma as “my sunshine” on Twitter.

“Project semicolon is a movement dedicated to presenting hope for those suffering from depressionthoughts of suicide, addiction, and self-injury, ” Alisha wrote on Instagram at the time. The actress referenced Amy Bleuelthe mental health activist who started the mental health non-profit Project Semicolonand who passed away in 2017. According to Amy’s interview with “The Mighty,” the inspiration behind the semicolon as a symbol is derived from its grammatical use.

“In literature, an author uses a semicolon to not end a sentence but to continue on,” she said. “We see it as you are the author and your life is the sentence. You’re choosing to keep going. ”

Selena got a “1” tattoo on the right side of her rib cage as a tribute to one of her best pals, Courtney Lopez [née Barry], whom she calls her “actual # 1.” She and Courtney shared their tiny matching tattoos in a 2018 birthday post for her BFF.

“And lastly, my actual # 1 [Courtney Barry] you are an incredible woman, ”Selena wrote in the post celebrating the ink. “The way you handle life’s most confusing moments is indescribable and graceful. You are moved by the littlest stories to the most heartbreaking ones, you will give someone your perfume if they say you smell nice, you are freaking hilarious and always stand firm in your faith, a loving sister, an amazing friend and a beautiful daughter. You are the definition of FEARFULLY and WONDERFULLY made baby! # 1[.]”

Selena definitely loves to honor her best buds! The Spring Breakers and her closest friends, including Courtney, Ashley Cookand Raquelle Stevensgot identical “4” tattoos on different parts of their bodies.

Selena showed her “4” is located on her right forearm just under the crease of her elbow and she shared a slew of photos in August 2018 of the event with her friends.

“# 4 because these women have stayed by my side for 7 years,” she wrote in her caption. “4, because you are my 4 for the rest of my life. I love you ladies. You all inspire me to be better, stronger, closer to god and we have lived the most INSANE story together already. Can’t wait for 50 more !! ”

An Arrow For Forever

Selena definitely loves to shout-out her pals, as well as her close collaborators! One of her co-writers, Julia Michaels, who has helped craft many of Selena’s greatest tracks, including “Lose You to Love Me” and “Bad Liar,” got a matching arrow tatt on her hand with Selena following her Nov. 2019 concert in LA. After they performed their duet “Anxiety” and shared an on-stage kiss, they got the small, identical arrows on the bases of their thumbs which point toward each other when they hold hands. They got the ink back stage from artists London Reese spirit Brad Reis.

“It’s tatted .. my arrow points to you forever,” Selena wrote on her Instagram story at the time.

On Nov. 24, 2019, Selena shared a collage of Polaroid photos taken backstage at the American Music Awards. In one of the shots, she lifted up her dress to reveal a large tattoo on her upper left thigh which showed two hands joined in prayer and a rosary draped around them.

Like many of her tatts, the design was done by Bang Bang, who also shared photos of the ink session to his own Instagram.

Fans first caught a glimpse of a number design above Selena’s right elbow when she released “Rare” – mainly seen in music videos and press photos.

During a Dec. 2019 interview with CapitalFM, Selena shared that she inked the date she underwent a kidney transplant, noting how she was rushed to the hospital for kidney failure in the summer of 2017 as a result of her lupus, a chronic autoimmune disease.

Selena said her friend and donor, France Raisaalso shares a matching tattoo. “I did that with the girl who gave me the kidney,” she told the outlet.

More Bang Bang for her buck! Selena kicked off 2020 – and the release of her third solo album, Rare – with yet another Bang Bang original, inking the title “Rare” in small black letters on the right side of her neck.

“Did it again,” she wrote in an Instagram post at the time, tagging artist Bang Bang and also adding a butterfly emoji.

Another Bang Bang original – you do not say! Selena’s go-to tattoo artist unveiled the “Rare” singer’s tatt in a short video on his IG.

The black-and-white clip shows a close-up shot of the delicate cross located on her collarbone, then panning to Selena showing her adorable grin as she fixes her mask.

“I am very, very spiritual,” she told Vogue in a recent interview. “I believe in God, but I’m not religious. I’ve been a Christian for a while now. I do not talk about it too much – I want to, but it’s gotten a bad rep. I just want to make it clear that I love being able to have my faith, and believe in what I believe in, and that truly is what gets me through. ”

“I get this a lot. I showed her a couple [cross] designs that were larger and photoshopped them onto her body. We did a bunch of renderings imposed on different body parts, ”he shared.

“She loved it. No pressure though, right? ” he joked. “It’s right on her collarbone where everyone will see. It’s a couple straight lines and it looks easy. But I was sweating. ”

Kissed by a Rose

The most recent collab between Selena and Bang Bang came last December 2021, when the artist revealed a black-and-white photo of Selena but a color pop of the new ink: a pink watercolor rose that starts at the base of her neck and streches down between her shoulder blades.

The following month, Selena shared that model Cara Delevingne was the partial inspiration behind the design.

“It means a couple of different things,” Selena said on “Live with Kelly and Ryan.” “Me and Cara, one of my best friends – I was maybe 16 when I met her – she calls me rosebud. So it’s a nickname. And I’ve always wanted a rose and now I got one. And I love it. ”