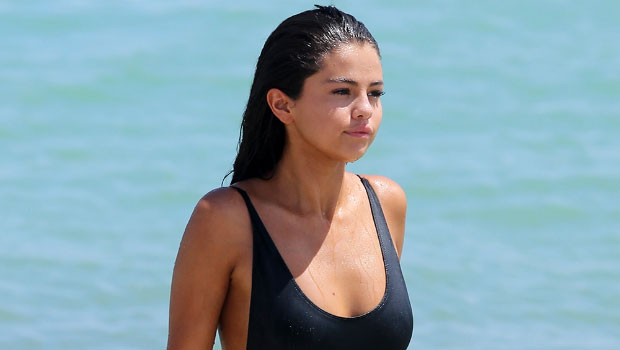 Selena Gomez, 30, was the picture-perfect example of summer beauty, in her latest TikTok video! The singer shared a video that showed her relaxing on a yacht in a black one-piece bikini as she lip synced over a hilarious audio dub about talking to her. She had her hair pulled back and accessorized with thick gold hoop earrings as she rocked long nails and a flattering face of makeup.

“So, what part of my face says ‘Talk to me’? None…absolutely none,” the audio clip could be heard saying as Selena pretended she was the one saying it. During the clip, she sprayed a product in her face before putting a pair of sunglasses on and acted funny and sassy. A large amount of comments came in after she posted the video and they were mostly supportive.

“She’s finally realizing she is the SELENA GOMEZ,” one follower wrote while another shared, “Living your best life.” A third pointed out how “happy” she looks and a fourth complimented her earrings. Many more just gushed over how pretty she was in the video.

Before Selena wowed with her new clip, she made headlines for her stylish outfit during a dinner with friends last week. She rocked a black turtleneck dress with a slit under a white jacket as she headed to Nobu Malibu. She also wore black heeled ankle boots and hoop earrings as her hair was up into a high hairstyle. She topped off the look with glasses, looking smart and sexy.

Selena’s outings come after a source told us she’s focusing on herself rather than love, at the moment, especially since she just turned 30. “She isn’t concerned about falling in love or any of that right now. She has learned to love herself and she has so many amazing people in her life who care so much about her,” the source EXCLUSIVELY told HollywoodLife. “Selena’s milestone birthday has her really reflecting on her life. Her 20s brought her success, but it was a rollercoaster at times.”

“She feels like she is at a place in her life now that she wasn’t at before,” the source continued. “She has dealt with a lot and has been through so much, but this is all behind her now and 30 marks a new beginning for her,” they explained. “She has learned so much but is not the same girl she was just a couple of years ago.”