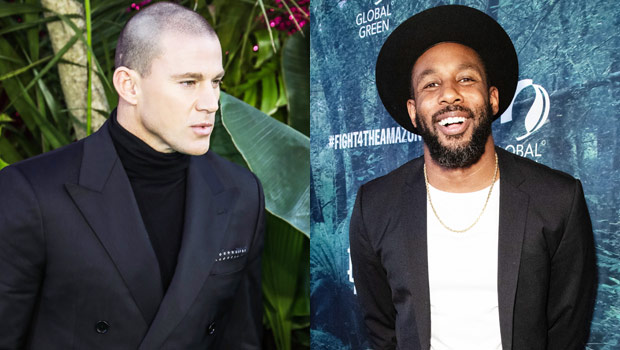 Channing Tatum paid tribute to Stephen ‘tWitch’ Boss in an Instagram post after the dancer’s death. The two were in Magic Mike XXL together in 2015, and Channing shared a selfie of them from behind-the-scenes. In the pic, they’re both shirtless with backwards baseball hats on. “I have no words,” Channing wrote. “There aren’t any. My head or heart can not understand this. There is just so much…I don’t know where to begin. I love you. I’ll see you again my friend. Until then.”

The actor is just one of many celebrities who paid tribute to tWitch on social media after he died by suicide at the age of 40 on Dec. 13. “tWitch” was found in a motel room near his home in California. The Los Angeles County Medical Examiner confirmed the death by suicide and that no foul play was expected. The star’s cause of death was officially ruled as a “gunshot wound to the head.”

In addition to being on So You Think You Can Dance?, tWitch was also known as the DJ and co-host of The Ellen DeGeneres Show, a position he held from 2014 until the show ended. He was married to fellow pro dancer, Allison Holker, and they had celebrated their nine year wedding anniversary just days before his death. “tWitch” and Allison had two kids together — a son, 6, and daughter, 3 — while he also adopted Allison’s daughter from a previous relationship.

Allison has not posted to social media since her husband’s passing, but she did share a touching statement with PEOPLE about his light and legacy. “Stephen lit up ever room he stepped into,” Allison shared. “He valued family, friends and community above all else, and leading with love and light was everything to him. He was the backbone of our family, the best husband and father, and an inspiration to fans.  To say he left a legacy would be an understatement, and his positive impact will continue to be felt. I am certain there won’t be a day that goes by that we won’t honor his memory. We ask for privacy during this difficult time for myself and especially for our three children. Stephen, we love you, we miss you and I will always save the last dance for you.”

Ellen DeGeneres also publicly mourned tWitch with a post on Instagram. “I’m heartbroken,” she admitted. “tWitch was pure love and light. He was my family and I loved him with all my heart. I will miss him. Please send your love and support to Allison and his beautiful children – Weslie, Maddox and Zaia.”

If you or someone you know is in crisis, call the National Suicide Prevention Lifeline at 988, or contact the Crisis Text Line by texting TALK to 741741.

a star who shone bright