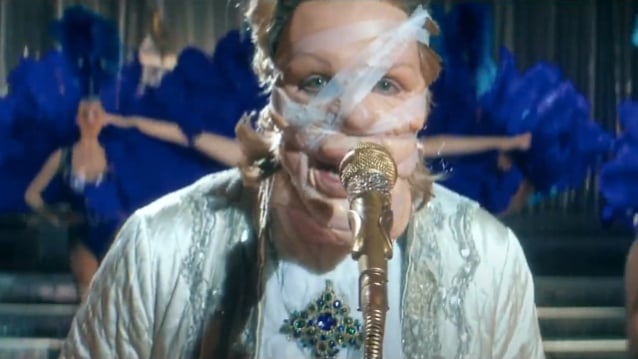 German industrial metallers RAMMSTEIN have released the official music video for their new single, “Zick Zack”. The lyrics for the track and the video deal with what is nowadays often a compulsive tendency on the part of the individual towards self-optimization, sometimes through radical alteration of the visual appearance by use of the scalpel.

The clip arrives a few days after a rumor emerged that the Berlin band had invested in a “beauty clinic” by the name of “Zick Zack”. Fans around the world called the “Zick Zack” hotline to make an appointment, find out more about the clinic or even to talk to the team of experts.

For the physical release of their new single, RAMMSTEIN is publishing a teen-style “Zick Zack MagazineThe 32-page magazine contains stories, photos and interviews on the theme “Prettier, Bigger, Harder” as well as a reader’s letter column called “The Dr Flake Botox Box”, an XXL poster, six posters and 30 exclusive RAMMSTEIN stickers. And of course, the two-track single CD is included with the magazine.

“Zick Zack” will also be released on seven-inch black vinyl. Boys Noize supplied the remix to the song. Both physical formats will be released on April 13.

RAMMSTEIN fans should mark April 9 in the calendar. A RAMMSTEIN pop-up kiosk will open at Berlin’s Alexanderplatz (Alexanderplatz / Otto-Braun-Str. 70-72) at 10 am (until 2 pm), where the “Zick Zack” single will be sold as part of the aforementioned extra magazine, before its official release – while stocks last.

“Zick Zack” is taken from RAMMSTEIN‘s upcoming album, “Time”which will arrive on April 29.

Bryan Adams managed to get a special scoop for the cover of the new album. The Canadian musician and photographer took the shot of RAMMSTEIN on the steps of the Trudelturm in Berlin Adlershof, an imposing monument to aerial research in the city’s Aerodynamic Park.

Over the course of a career spanning almost 30 years, RAMMSTEIN has sold more than 20 million albums around the world and played countless spectacular, groundbreaking tours. When the band’s sold-out stadium tour had to be postponed due to the pandemic, RAMMSTEIN used the time to work on their new album.

RAMMSTEIN fans can look forward to multiple “Time” formats. The new album will be released as a standard CD in a digipack with a 20-page booklet, a special edition CD in a 6-panel digipack with a 56-page booklet including slipcase, and as a double 180g vinyl LP with a 20- page large-format booklet, as well as in the usual digital formats.

RAMMSTEIN is scheduled to kick off the European leg of the band’s 2022 tour on May 15 in Prague, Czech Republic. A North American stadium run will begin on August 21 in Montreal and end on October 4 in Mexico City.