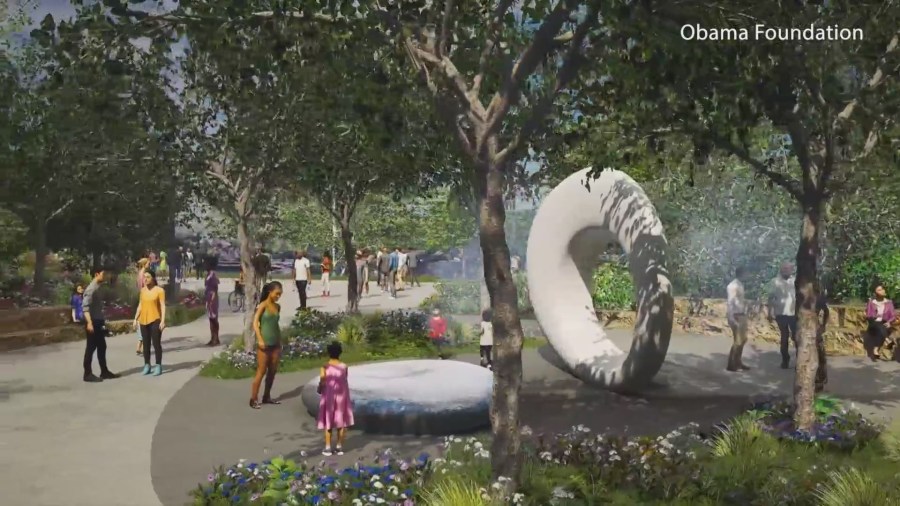 He used the occasion to announce a gift that will honor his late mother.

A garden is a place where seeds are planted and nurtured. Then they grow, and blossom to fill the world with color and beauty.

Fitting, then, Obama chose to name the garden at his Presidential Center on Chicago’s South Side after the woman who nurtured his growth: his mother Ann Dunham.

“When we thought about what might be a fitting way to commemorate my mother’s influence on my sister and me, I thought about where she would want to be in this space,” Obama said. “I could picture her sitting on one of the benches on a nice summer afternoon, smiling and watching a bunch of kids running through the fountain and I thought that would capture who she was as well as just about anything else.”

The garden will hold a special sculpture designed by Maya Lin, the world-renowned artist who conceived the Vietnam Memorial on the National Mall and the Civil Rights Memorial in Montgomery, Alabama.

“Not only is it a place for nurturing and growth and meditation and teaching in a way,” Lin said. “There’s also this really wonderful undercurrent of a really strong woman who formed and shaped the president.”

The installation will consist of two components that represent the connection between Barack and Michelle Obama.

According to Lin, an “oculus” will emit mist and a “flat pebble piece” that will fill with water, which will cascade over the edges.

Lin has named it “Seeing through the Universe.”

From the archives: The Obamas attend the celebratory groundbreaking at the Presidential Center

“There was a little bit of a black hole, and the oculus you see through, and now you’re seeing into the mist,” Lin said. “So even the title of the piece, ‘Seeing through the Universe,’ is very much a nod into their far-reaching insight into the world.”

More than anything the garden is meant to be enjoyed by people – and so is the art, which in its own way enhances and cultivates the life of the community.

“The piece doesn’t become the artwork until people start engaging with it,” Lin said.