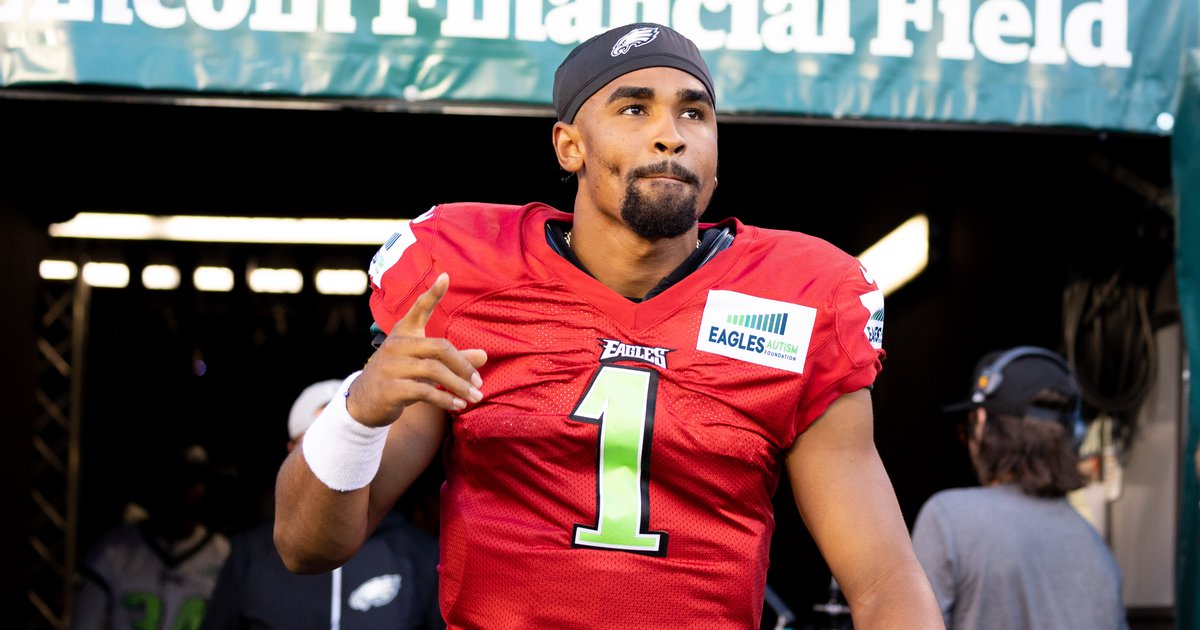 The bottom bowl of the Linc was packed with fans and it was surprisingly loud as the Eagles took the field for their only practice open to the general public Sunday night. There was a lot of energy and the players could clearly feel it as the intensity was dialed up pretty high ahead of the final week of training camp.

The Eagles started the non-individual drill portion of practice with what they apparently call “Red Zone Jamboree,” a game that pits the full team offense and defense, and awards points to the defense for stops and the offense for scores. It was definitely nice to see Nick Sirianni give the people what they want to see: actual football being played. The score for this session, for those curious, wound up offense 15, defense 10. Here’s a look at Hurts’ performance:

Play 1: Hurts took a snap at the defense’s 40 and found Goedert across the middle for about 20 yards. He stood in the pocket and let the play develop and looked pretty good with the throw on the money.

Play 2: A broken play, Hurts threw it away.

Play 3: Hurts fakes the screen (or elects not to throw it) to the running back on his left before turning to his right and throwing it incomplete on a forced throw to second tight end Jack Stoll.

Play 4: Hurts shimmies his way around one defender before darting straight for the end zone and a “touchdown,” even though he is wearing a red jersey and cannot be tackled. It is also hard to really assume that Hurts would have even been able to run in this scenario in a live game as the defensive ends are tentative near the quarterback at best. It looked like a scramble and not a designed run.

Play 5: After the second team offense had a three-and-out, Hurts threw a pass to a wide open AJ Brown in space. Brown was able to scamper around the defense for a credited “first down.”

Play 6: A ferocious pass rush forced Hurts to bail and throw the ball out of bounds.

Play 7: A flag was thrown for holding on Landon Dickerson on a play action keeper that saw Hurts run for a minimal gain.

Play 8: After a false start, Hurts took a shotgun snap on the “third down” play and threw an incredible deep ball that was just over James Bradberry’s out-stretched hands and was hauled in as Brown tumbled into the end zone. It was clearly the throw of the practice and had the Eagles fans in attendance on their feet. I am not entirely sure if this is a throw Hurts completes in 2021 — without a big bodied receiver he trusts on the sidelines this is not a risk he’d likely be taking. Having Brown in the red zone (or anywhere on the field as this play went for about 30 yards) could be a game-breaker for the Birds.

The team went right into 7-on 7’s next around midfield.

Play 9: A quick pass to Brown who curled to the inside. No clue how far he would have taken it with run after the catch. He was credited for about five yards.

Play 10: Hurts scanned the field and checked through his receivers, and with no pass rush eventually gave up and ran for a few yards before the whistle.

Play 11: Hurts took a risk over the middle and missed on a short throw to Stoll, which was batted away by a defender (in the white jerseys, the defense’s numbers were hard to see from the press box, apologies)

Play 12: Another hard throw over the middle was broken up, just beyond the sticks on a “third and five.”

After some special teams drills the Eagles set up at the offense’s own 35 for another 11-on-11 drill.

Play 13: Hurts stood in the pocket as he came close to being sacked but was able to get rid of it successfully to Zach Pascal who turned and ran for a few yards.

Play 14: Miles Sanders took a handoff for a few yards up the middle (the first handoff of practice for the first team).

Play 15: Brown motioned from left to right and then ran a slant, but Hurts went for a more shallow Dallas Goedert who was unable to come up with the dart throw in traffic. It wasn’t a drop, and props to whoever made the play.

Play 16: Hurts optioned to his left and tossed it to Sanders for five yards so before the play was whistled dead.

Play 17: Hurts was chased out of the pocket by Marlon Tuipulotu and likely would have been sacked before he scrambled for the sideline.

Play 18: The second and then third team offense each had a chance before Hurts and the 1’s came back in at their own 25 yard line. He had time but no one was open and Hurts scrambled to the right for a few yards before going out of bounds.

Play 19: A handoff to Sanders up the middle out of the gun went for three yards, setting up a “third and five.”

Play 20: A bunch formation saw Brown go out and to the left sideline and catch a pass just good enough to move the chains.

Play 21: A play-action keeper saw Hurts take the ball out of Sanders’ stomach, burst through a hole and sprint down field. This is another one that is hard to gauge with no live hitting, but he could have broken a pretty big play were this in a game. The refs gave him nine yards.

Play 22: Hurts gets the first down with a quick pass to Stoll over the middle. With no Zach Ertz in the fold this year it doesn’t appear the Eagles or Sirianni are shying away from two tight end sets, and Stoll (or whoever gets the TE2 role) could be a relatively big impact player.

Play 23: Another keeper-type run saw Hurts run around the left tackle and turn down field. He was giving six yards but it could have gone for more.

Play 24: Hurts dumps it off to Sanders on his right and Sanders gets next to nothing as he is forced out of bounds near the line of scrimmage. Sanders catching the ball will be a big boost this season as he wasn’t a huge contributor in the pass game last season.

Play 25: Another QB keeper got the Eagles offense a first down. It’s odd to see so many QB runs in this setting and the second team offense came in in relief following this play. It’s worth noting that in contrast to his other runs, Hurt’s fatigue after reaching the line to gain.

Gardner Minshew and the second team got some reps before the first team took over for the final 11-on-11 session from the offense’s own 35 yard line.

Play 26: A handoff to Sanders went for a pretty decent gain, obviously without tackling although it’s unclear if it would have gone for more than eight yards.

Play 27: Hurts throws it to a heavily covered Brown who hauls it in near the sideline for the first down. It was probably his second best throw of practice. Brown’s concentration on contested throws has been very impressive this summer.

Play 28: A throw over the middle to Stoll is nearly picked off by TJ Edwards — who continues to have a spectacular camp.

Play 29: A wide open Dallas Goedert picks up about seven yards as he ran away from the middle of the field.

Play 30: A Hurts toss over the offensive line that looked kind of like a tennis player lobbing it over the fence was completed to Quez Watkins who got the first down. The series was called dead after those five plays.

In all, across a variety of drills Hurts was 11-for-17 with a touchdown pass and a “touchdown” run. Out of 30 plays, Hurts ran the ball seven times. Fantasy owners, Hurts is still going to run a lot.

It’s worth noting for the context of this recap that the Eagles were without their top three right tackles — Jordan Mailata, Andre Dillard, and now L’Raven Clark were all out for Sunday’s event. Hurts has pretty good poise in the pocket and made some killer throws but also made some bad plays, due in large part to a potent pass rush and a depleted right side of the o-line.

Hurts and the rest of the Birds are not on the field Monday but will be back at it for the last two training camp practices this week on Tuesday and Wednesday.