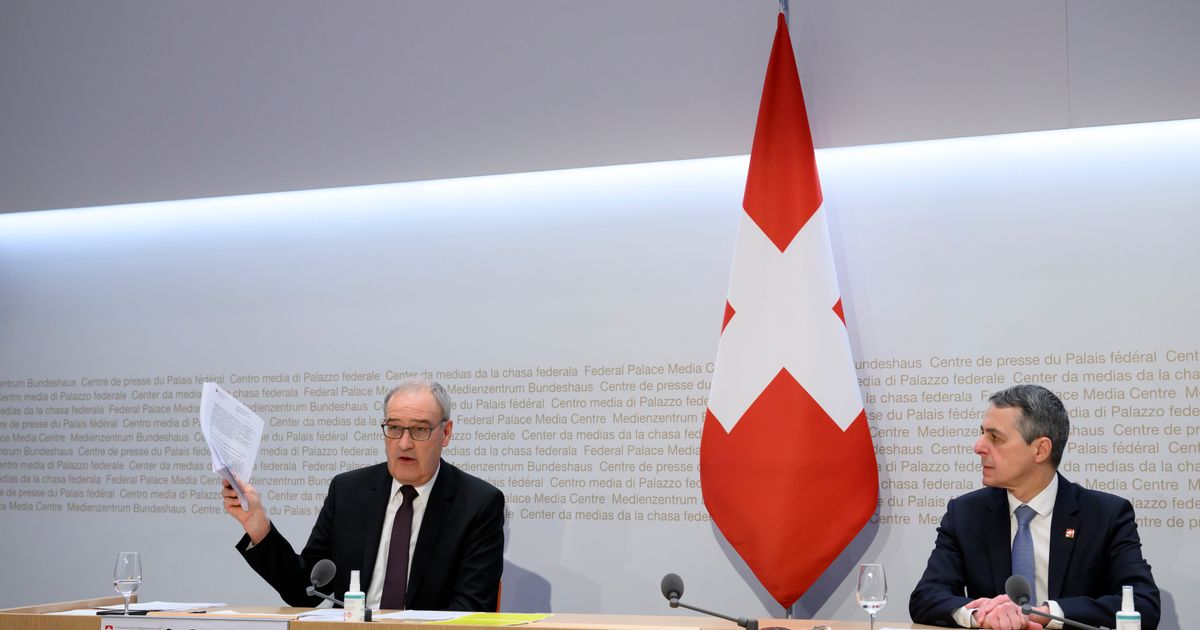 GENEVA (AP) – Russia’s invasion of Ukraine has put Switzerland’s much-vaunted neutrality to the test – and along with it, the country’s traditional role as international intermediary and reputation as a safe haven for the assets of Russia’s richest and most powerful.

The Swiss executive branch stopped short of announcing unilateral sanctions against Russian interests after Moscow’s blistering military action in Ukraine. Instead, the Federal Council opted to fall in line with the European Union and pledge that Russian individuals and companies hit with EU sanctions will not be able to evade them in Switzerland, which is not one of the EU’s 27 member states.

The government said Friday that financial “intermediaries” in Switzerland were now banned from starting new business relationships with 363 Russian people and four Russian companies. Any existing business must be reported to the Swiss economic affairs secretariat. Further steps are under consideration.

While hardly a crackdown compared to other Western sanctions aimed at punishing Moscow for its invasion of Ukraine, the impact could be felt. The rich Alpine nation has been the biggest recipient of transactions by Russian private individuals – ahead of Britain, Spain, Luxembourg and the United States, according to a report compiled by the Swiss Embassy in Moscow.

“Switzerland has for years been by far the most important destination worldwide for rich Russians to manage their wealth,” the report said, adding that net transfers of Russian taxpayers to Switzerland totaled $ 2.5 billion in 2020. The Swiss news agency SDA-ATS reported net transfers of $ 1.8 billion in the first half of 2021.

Federal Councilor Guy Parmelin, the head of the federal economic affairs department, noted that Switzerland was bound to follow UN sanctions but could decide whether to follow EU sanctions based on criteria such as foreign policy and legal aspects – including legislation that has enshrined “neutrality” into Swiss law.

Swiss authorities are in essence extending measures set up in 2014 after Russia’s takeover of Crimea, in which they also sought to ensure that EU sanctions were not dodged in Switzerland, to hundreds more people and businesses – but going further.

“Switzerland is thus taking a tougher line with regard to Russia,” Parmelin told reporters in Bern, the capital.

German government spokesman Steffen Hebestreit said Friday that “every country decides in a sovereign way about its actions… If you were to ask me whether I’d be happy if Switzerland supported the (EU) sanctions, then I’d clearly say ‘yes’ . ”

However, Switzerland is also anxious to safeguard its role as diplomatic go-between for some countries – one of which is Russia. The Swiss government represents the interests of the former Soviet republic of Georgia in Moscow and Russia’s interests in Tbilisi, the Georgian capital, under an arrangement set up after those two countries broke off bilateral ties during their conflict in 2008.

“It’s important to the Federal Council that implementing these measures does not cut off talks between Switzerland and the countries affected,” said Parmelin. “Switzerland wants to be able to offer its services to the countries in conflict if these countries wish.”

“If Switzerland were to automatically adopt the sanctions imposed by the EU or other countries, it could no longer credibly play the traditional role for which it is valued worldwide,” he added.

The respected Swiss daily Tages Anzeiger reported Ukrainian President Volodymyr Zelenskyy asked his Swiss counterpart on Saturday to act as a neutral mediator between Ukraine and Russia, and help work toward a cease-fire between the two countries, notably in the context of a Human Rights Council meeting in Geneva opening Monday. The Swiss Foreign Ministry did not confirm any such communication.

Geneva hosted a summit between Russian President Vladimir Putin and US President Joe Biden in June, as well as a couple of bilateral meetings in recent weeks as tensions brewed across Ukraine. The Swiss relish their role and reputation as a skilled, neutral host for such international gatherings and as a hub for international organizations like the United Nations and the international Red Cross in Geneva.

The push-and-pull felt by the Swiss could grow. Some Western countries announced or were preparing individual sanctions against Putin and his foreign minister, Sergey Lavrov, including possible travel bans. Switzerland is unlikely to go that far: Lavrov himself is expected to be on hand in Geneva on Tuesday for a session of the Human Rights Council.

Economic concerns – not just the political neutrality that is enshrined in Swiss law – could also figure into the Swiss calculations.

Geneva is a major hub for commodities trading like oil and wheat that matters to Russia and Ukraine, and is reported to be a favored stomping ground for Russian oligarchs and other economic elites drawn to low-tax and privacy-minded banks and policies in Switzerland.

The June report by the Swiss Embassy in Moscow said roughly 80 percent of Russia’s commodities trade goes through the Swiss financial services centers of Geneva, Zug, Lugano and Zurich. Major Russian energy and commodities firms have offices in Switzerland.

Frank Jordans in Berlin and Emily Schultheis in Vienna contributed to this report.