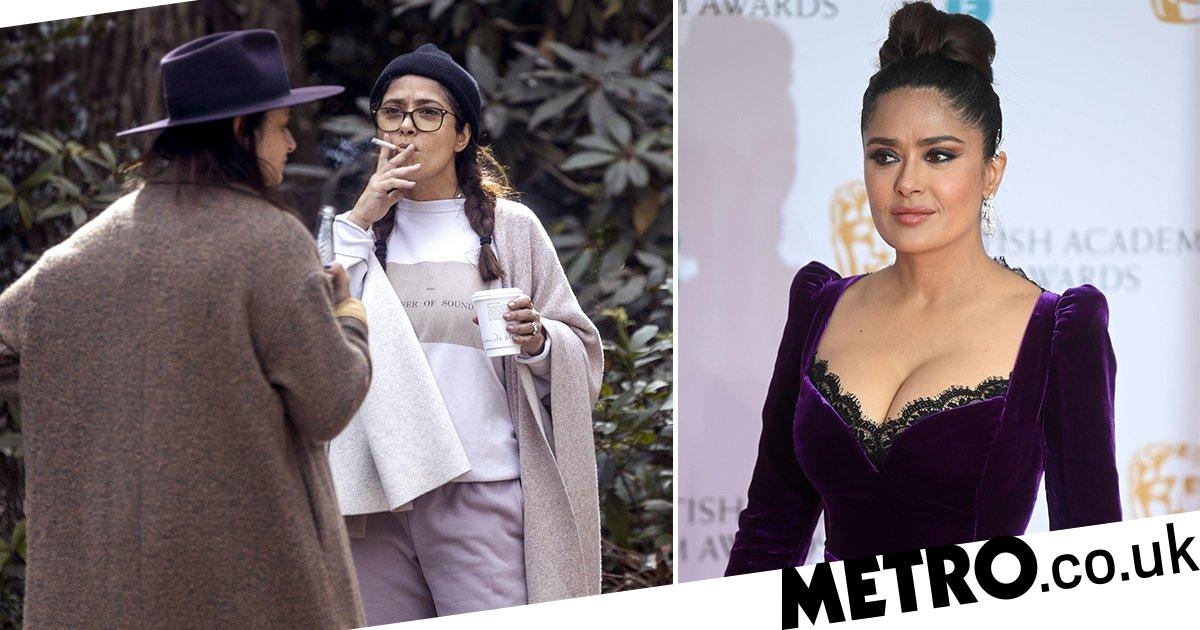 Usually pictured red-carpet ready in head-to-toe designer gear, in a rare sighting on her down time, Salma Hayek stepped out looking super casual.

The actress was make-up free and donning cozy lounge-wear as she and her pal Mia Maestro walked their two dogs around London’s Hampstead Heath on Tuesday.

In wide-rimmed glasses, Salma, 55, looked comfy in a matching cotton beige jogging trousers and poncho paired with a white T-Shirt which read Power Of Sound, a black winter hat and black ankle-length boots.

At one point she was spotted taking a cigarette break on the leisurely stroll.

The House Of Gucci star, who was followed by her bodyguard, looked deep into conversation as she sipped on a takeaway coffee and happily blended in with other park-goers.

After the walk, the mother-of-one was later seen chatting with Argentinian actress Mia by her large black SUV.

One of the dogs, which belongs to Salma and her 59-year-old French businessman husband Francois-Henri Pinault’s daughter Valentina, 14, was then put in the car boot.

The Frida actress, who was in the capital for the Bafta Awards three weeks ago, has previously revealed that she spends a lot of time with her husband and their daughter in their luxurious 17-room London mansion.

During an appearance on The Ellen DeGeneres Show last year, she also admitted that her North London home is what keeps her returning to the UK because it’s excitingly haunted.

‘It’s not [haunted] like before, ‘said Salma, who was honored with Hollywood Walk of Fame star last year. ‘Somebody did not want to work there anymore because the piano played by itself, and he would not go to the third floor because he saw…

‘Lights go on and off, or the doors and windows open and close. I’ve seen some of it… I’ve seen the actual things, [the ghosts] twice. But a lot of people in the house have seen it.

Salma later added that only two ghosts are now living at their house.

Valentina, who was in the Ellen audience, and was last pictured with her mother at Eternals premiere in Los Angeles last October, told the chat show host that she too had seen ghosts at home and thought there were far more than two.

If you’ve got a celebrity story, video or pictures get in touch with the Metro.co.uk entertainment team by emailing us celebtips@metro.co.uk, calling 020 3615 2145 or by visiting our Submit Stuff page – we’d love to hear from you.