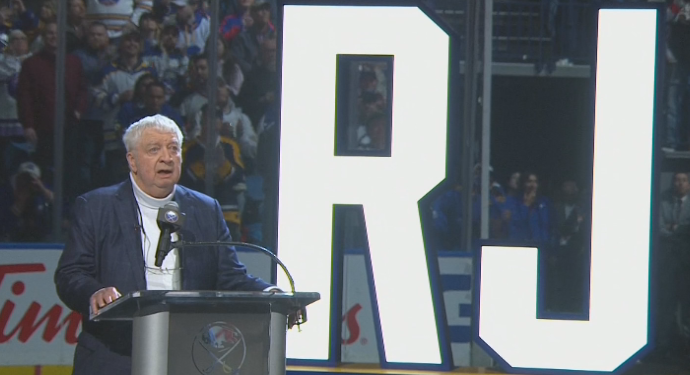 A sold out crowd has been hard to come by this season, but Sabers fans descended on KeyBank Center hours before the puck dropped Friday night to celebrate Rick Jeanneret’s legendary career.

“I just take a look, and see my name up there with all of the other fellows, and think wow that’s really something,” Jeanneret said.

When RJ appeared on the big screen for the first time, fans cheered for several minutes, interrupting the remarks from owner Terry Pegula. In his emotional speech to fans, Jeanneret remembered 51 years of “beautiful noise,” but not in the way Neil Diamond wrote. RJs is different.

“My beautiful noise is the roar of the crowd,” he said in his pregame speech.

It was the only place fans wanted to be in Western New York – alongside a sports broadcasting icon. The arena was packed with fans from across the region sporting their favorite Sabers gear. For many, they chose not their favorite player or number, but their favorite announcer.

Several fans said that RJ is the voice of the organization and represents not just the team, but the entire city. They called it bittersweet to bid farewell to a man they have welcomed into their homes for more than half of a century.

“You can not always get the Sabers games on television where I am, but you can always listen to the radio,” Adam Ujvari of Cleveland, Ohio added. “And they would broadcast Rick’s voice, and it’s almost like you’re watching the game.”

For many, it is Jeanneret’s voice, energy, passion and calls that shaped memories that will last a lifetime. While there are so many to choose from, fans News 4 spoke with said among their favorites are: “May Day”, “Who Else?” and “Top Shelf Where Mama Hides the Cookies.”

Jeanneret’s memories are a little bit different. In fact, they are the reverse. He recalls the crowds chanting “Ooh, aah, Sabers on the warpath” and counting the number of goals, saying “We want more.” He remembers the Aud and the KeyBank Center bustling with cheers for big games in the Queen City.

“I have only three words. I love you, ”Jeanneret said to fans.

A scary good career could only end in this legendary way.