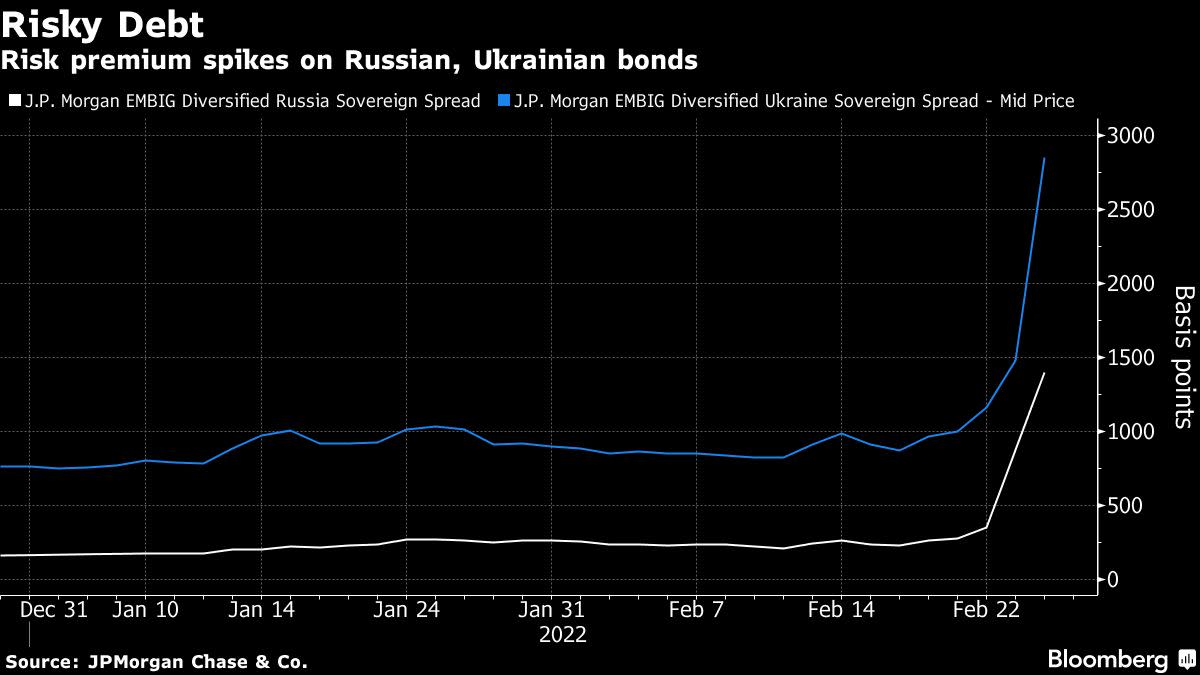 (Bloomberg) – Russia’s credit rating was cut to junk by S&P Global Ratings, which joined Fitch Ratings in downgrading Ukraine amid an escalation of conflict in the region.

S&P lowered Russia to BB +, below investment grade, from BBB- late Friday and warned of further cuts, citing the “strong” international sanctions slapped on the country following its invasion of Ukraine. S&P also lowered Ukraine to B- from B.

The war, which entered its third day on Saturday, has prompted the US and its allies to impose a swath of sanctions on Russia. President Joe Biden sanctioned Vladimir Putin and several key aides as Russian troops with opposition in Ukraine’s capital.

“The announced sanctions could have significant direct and second-round effects on economic and foreign trade activity, domestic resident confidence, and financial stability,” S&P said in a statement. “We also expect geopolitical tensions to drag on private-sector confidence, weighing on growth.”

Russia remains financially stable thanks to its international reserves and low level of debt, the Finance Ministry in Moscow said in a statement Saturday, responding to announcements by the ratings companies. The Finance Ministry “will continue to maintain a responsible financial and budget policy,” according to the statement.

The invasion sent the financial world reeling this week, with bonds from Russia and Ukraine the worst hit in global sovereign-debt markets. Ukrainian dollar bonds were down an average of 53% this week while Russia’s have lost 45%, according to data compiled from a Bloomberg index.

The invasion of Ukraine by Russia this week represents “a significant further elevation” of geopolitical risk and severe sanctions against Russia that “could impact sovereign debt repayment,” the Moody’s analysts said in a Friday statement.

“The ultimate severity of the impact of new sanctions on Russia’s credit profile will depend on their scope, the sectors targeted and the degree of coordination between Western countries,” they added. For Ukraine, meanwhile, “an extensive conflict could pose a risk to the government’s liquidity and external positions given Ukraine’s sizable external maturities in the coming years and the reliance of its economy on foreign-currency funding.”

For Fitch analysts, the invasion by Russia has spurred “heightened risks to Ukraine’s external and public finances, macro-financial stability and political stability.”

The turmoil has not just been confined to Ukrainian and Russian bond prices. Riskier assets and havens alike have been whipsawed this week as investors gauge the situation and its economic impact.

“Everything depends on how long this war (for lack of a better term to use) lasts,” said Jack McIntyre, a portfolio manager at Brandywine Global Investment Management in Philadelphia. “I’d say Ukraine bondholders have more to worry about than a downgrade.”