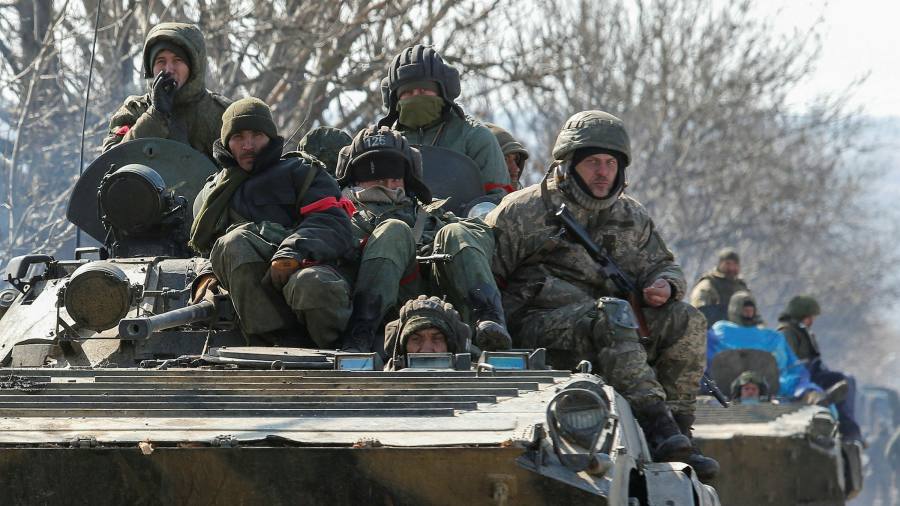 Russia said it was refocusing its month-long military offensive in Ukraine on the country’s eastern Donbas region, in comments that suggested Moscow could scale back attacks in other parts of the country.

Speaking at a defense ministry briefing in Moscow on Friday, Sergei Rudskoy, a high-ranking official in the Russian army, said what the Kremlin has labeled a “special operation” in Ukraine was entering a new phase designed to fully “liberate” the eastern Donbas region. He described the targeting of other cities including the capital Kyiv as part of a strategy to distract the Ukrainian army.

Ukrainian authorities and Western officials reacted cautiously to the claim of a change of military strategy, which comes as Russian advances on Kyiv and other towns have stalled or been hindered by fiercer than expected Ukrainian defense. A US official accompanying Joe Biden during a trip to Belgium and Poland said on Friday that they were not treating the Russian statements as new and that they would have to see if anything changes tactically.

“The main aims of the first phase of the operation have been fulfilled,” said Rudskoy, head of the Russian army’s main operations directorate of the general staff. “The military capacities of Ukraine’s armed forces have been significantly decreased, which allows efforts to be focused on achieving our main aim: liberating Donbas.”

Russian troops had succeeded in blocking Kyiv, as well as Kharkiv, Chernihiv and Sumy in the north-east, and Mykolayiv in the south-west, he said, as well as taking control of parts of the south. In doing so, Russian forces had distracted the Ukrainian army and limited its ability to respond to Russian actions in Donbas.

Rudskoy said Moscow’s goal was always to “liberate” the Donbas and that it chose to target Ukrainian military capabilities across the country first.

“We never planned to storm them,” Rudskoy said in reference to Kyiv, Kharkiv, Sumy and other besieged towns.

Though Russia “does not exclude the possibility” of still targeting these cities, “our forces and resources will be focused on their main aim – the complete liberation of the Donbas,” he added.

Russian-backed separatists in the Donbas have been fighting a proxy war against Kyiv’s central government since 2014, after Moscow annexed the Ukrainian peninsula of Crimea. Vladimir Putin backed the separatists’ claims to the whole of the region shortly before Moscow sent its troops and tanks into Ukraine from Russia and Belarus on February 24.

US and European intelligence assessment is that Russia’s plan for a swift victory has largely failed amid tactical missteps, logistical errors and unexpectedly strong Ukrainian resistance.

A western official said on Friday that a Russian brigade commander in Ukraine seemed to have been deliberately run over and killed by his own troops, in a sign of the low morale among Russian soldiers. The official added that a seventh Russian general had been killed, indicating high losses of senior Russian soldiers during the invasion.

Rudskoy relayed what he saw to be the achievements of the Russian invasion, focusing on the extent to which the breakaway Luhansk and Donetsk “republics” in Donbas had expanded their territories during the war. He repeated claims – denied by Kyiv and its US and European allies – that Ukraine was planning to retake full control of Donbas in the spring as a justification for launching a pre-emptive assault.

The UN said on Friday that more than 1,000 civilians have been killed in Ukraine in the month since Russia invaded, a number probably underestimated because “intense fighting” in some cities limited the “full picture”.

Authorities in the southern Ukrainian port of Mariupol, which has suffered heavy Russian shelling for weeks, said on Friday that an estimated 300 people had been killed during a Russian bomb strike on a theater that was being used as a shelter.

The western official said Moscow “clearly failed” in its initial objective of quickly seizing Kyiv, adding that it is not guaranteed that Russia will succeed in these [new] operations. ”

But a new focus could give Russia an opportunity to gain more territory in eastern Ukraine, the official said, given the ability of Moscow to focus its significantly larger firepower on a smaller area.

“By focusing down they have a better opportunity to correct some of the [logistical and tactical] mistakes they have made, ”the official said. “They can also direct their air forces and limited [firepower] on more concentrated areas. ”

The official cited intelligence assessments that Russia was sending 10 new battalion tactical groups to Ukraine. Such groups are the main organizational structure for Russia’s army, and typically have about 700 troops as well as tanks, artillery and other vehicles.

Andriy Yermak, chief of staff to Ukraine’s president Volodymyr Zelensky, treated with caution the notion that Russia could be abandoning a full-scale invasion.

“It’s a big danger before war is finished to make a public forecast, especially when you are fighting against one of the biggest armies in the world,” Yermak said during a conference call with the Washington-based Atlantic Council think-tank.