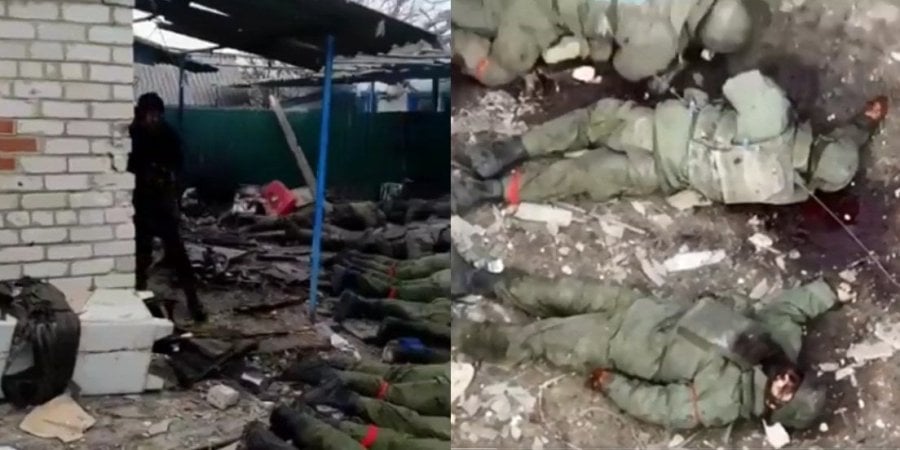 BBC News Ukraine reported that the incident happened in Makiyivka in Luhansk Oblast on Nov. 12.

In the evening and the next day, Nov. 13, a video taken from a drone appeared on Ukrainian websites, showing the bodies of 12 Russian soldiers in the yard of a village house. Posts on social networks said that Russian soldiers were killed by mortar fire.

However, Russia later accused the Ukrainian military of shooting Russian prisoners of war in Makiivka after two videos that don’t show the full incident appeared online.

Then, in video footage of the incident released on Nov. 17 by the Ukrainian Defense Ministry, more context about the incident was given. The video appears to be bodycam footage taken by a Ukrainian soldier.

In this video, Ukrainian troops order Russian soldiers to come out of a building one at a time and surrender. They also ask who the commander is and if everyone has left the building.

At the end of the video a man in dark clothes appears, apparently a Russian soldier. He opens fire at the Ukrainian soldiers as the surrendering Russian troops lie on the ground. The camera appears to fall and then only shooting can be heard.

It remains unclear at whom the man was shooting and what happened afterwards.

BBC News Ukraine supposed the drone video capture and the video captured by the Ukrainian troops showed same event. They argued that “the (same) door is seen on both videos as well as something that resembles a red toy car in the yard of the house.” The postures of the lying soldiers are similar before and after the shooting.

Still, the very moment of the shooting and killing of the 12 Russian soldiers wasn’t captured on video.

A report by open-source investigations group Conflict Intelligence Team or CIT speculates the videos show two war crimes: A Russian soldier shooting while pretending to surrender (the crime of perfidy) and the execution by the Ukrainian military of captured Russians without trial, although the video does not show the second event.

CIT added it would have been legitimate to kill only the person who started shooting.

Meanwhile, Russia has accused only the Ukrainian military of committing a war crime.

Russian Defense Minister Sergey Shoigu said the incident was “an intentional and methodical killing with direct shots to the head over 10 immobilized Russian soldiers.”

Spokesperson of the Russian Ministry of Foreign Affairs, Maria Zakharova, claimed the incident was a gross violation of international law and called the Ukrainian military “neo-fascists.”

Former Russian President Dmitry Medvedev demanded that the Ukrainian troops involved in the incident be put to death. Officially, capital punishment is outlawed in Russia.

The Chairperson of Eurasian Ombudsman Alliance, Tatyana Moskalkova, said she had asked international organizations to condemn the execution of Russian prisoners, and demanded the punishment of the Ukrainian troops.

Read the original article on The New Voice of Ukraine