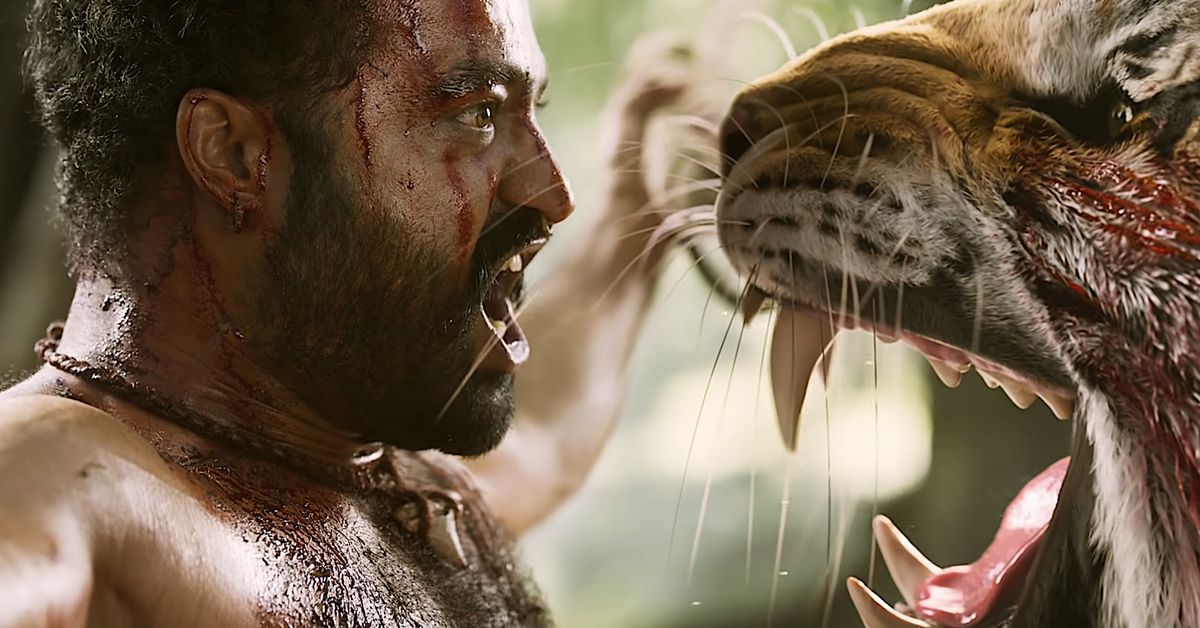 In the famous “No Man’s Land” sequence from 2017’s Wonder Woman, Gal Gadot strides across a barren battlefield in slow motion, deflecting German bullets with her wrist cuffs and magical shield. The wind blows through her hair as she leaps across the muddy fields with godlike nimbleness, the score swelling behind her with patriotic pride. There’s a similar moment in RRR (“Rise Roar Revolt”), SS Rajamouli’s action-drama hybrid about the adventures of two Indian revolutionaries who have divergent approaches to resisting British occupation in 1920s Delhi. The difference is, in RRRit’s just one or half a dozen scenes of its kind.

This last point makes its way into RRR, as part of a storyline that reframes Raju as a supercop on a mission to take down the British power structure from within. That’s a minor liberty, however, compared to the fact that in the film, both Raju and Bheem have superheroic agility, strength, and fighting abilities. Both can scale buildings like Spider-Man, dodge bullets like Wonder Woman, and flip their opponents like pro wrestlers. Bheem, representing the element of water, counts the animals of the forest among his allies, and bursts onto the field of battle with tigers and wolves by his side. And Raju, representing fire, drives a burning carriage and shoots flaming arrows. Picture Benjamin Franklin and Paul Revere joining the MCU, with Franklin harnessing the power of electricity, and Revere the swiftness of the wind.

The superpowers aren’t the only liberty taken with their stories. RRR explains gaps in both men’s histories by proposing that they became friends after they each made their way to Delhi in the early 1920s – Raju as an undercover imperial cop, Bheem on a rescue mission to save a village girl kidnapped by a colonial governor. (They never met in real life.) In the film, the pair bond over their mutual derring-do. They’re two strangers who agree with a nod to embark on a dangerous impromptu rescue mission to save a little boy trapped by a flaming train accident on a Delhi river.

Subtlety, to put it mildly, is not Rajamouli’s thing. And so the director not only takes every opportunity available to hammer home the “fire and water” theme, he also works in dramatic slow-motion shots wherever he can. Bheem trips and knocks a silver tray out of a waiter’s hand at a garden party? The tray drops in slow motion and spins to a stop as guests stare with wide eyes and jaws agape. Raju pummels a punching bag in frustration after being passed over for a promotion? You bet those drops of sweat are beading off of his glistening, muscular shoulders and dashing mustache at half-speed.

RRR also deals in big emotions to match its hyper-dramatic shooting style. Betrayal, loyalty, and legacy are all major themes, and an alternate title of the film could be SSS – “Secrets. Subterfuge. Sacrifice. ” Compared to a stereotypical Bollywood film (which RRR is not – it’s a Telugu production), RRR is relatively light on music and romance, devoting much of its screen time to visual spectacle, gonzo action, and patriotic zeal. The dynamic between Bheem and Raju has shades of the macho bromance of John Woo’s 1980s movies, until it transforms into a superhero team-up. And Rajamouli’s camera is unabashed in its worship of these men, introducing them with protracted sequences designed to build anticipation for viewers’ first look at the characters.

But RRR does make some time for comedy and music amid its stylized feats of mythological bravery. Between the title card – which pops up around the 45-minute mark – and the intermission (sorry, “InteRRRmission”) break two hours in, RRR pauses for a breezy interlude that invites viewers to hang out with the provincial Bheem and the more Anglicized Raju as they get into mischief and chase girls. Raju has a sweetheart back home – his childhood friend Sita (Alia Bhatt), to whom he pledged eternal loyalty before leaving his village to join the Indian Imperial Police. So he acts as Bheem’s wingman, helping Bheem charm sympathetic Englishwoman Jenny (Olivia Morris) with his aw-shucks attitude and impressive dance skills.

Jr NTR (the common abbreviation for NT Rama Rao Jr.) and Ram Charan, both Telugu superstars in their own right, show off those skills in the rousing “Naatu Naatu,” RRR‘s only real musical production number. (Another song, “Etthara Jenda,” plays over the end credits, and Bheem puts his defiance into song while being punished for his revolutionary activities.) Longtime Rajamouli collaborator MM Keeravani provides music for these numbers, along with a title song and instrumental compositions designed to get audiences to their feet.

RRR is a busy movie, full of kinetic camerawork, bustling crowd scenes, elaborate set design, expensive-looking CGI, and loud sound effects. Rajamouli is skilled at balancing the film’s many elements, so “overstimulated” is not quite the word for how walking out of RRR feels. It’s more like the pleasant exhaustion after a good workout.

The extended running times of Indian films used to form a barrier to entry for Western audiences unaccustomed to spending three full hours at the movies. But times have changed, and RRR is only 10 minutes longer than The Batman. On the other hand, although it’s set for release in 30 countries, the film assumes a familiarity with certain characters and iconographies that might go over foreign viewers’ heads. Still, at its core, this is a story about people fighting for their beliefs against impossible odds. It’s about perseverance and the power of working together towards a common goal. Those themes are universally relatable – as is the giddy thrill of watching racist forces of imperial oppression get exactly what’s coming to them.

[Ed. note: We recommend viewers check local listings or contact the theater to make sure you’re catching the version of RRR you want to see. The film was shot in Telugu, but some theaters are running multiple screens with versions of the film dubbed into one or more of the other major Indian languages: Hindi, Tamil, Kannada, and Malayalam. A Telugu screening will give you the original voice performances with English subtitles.]