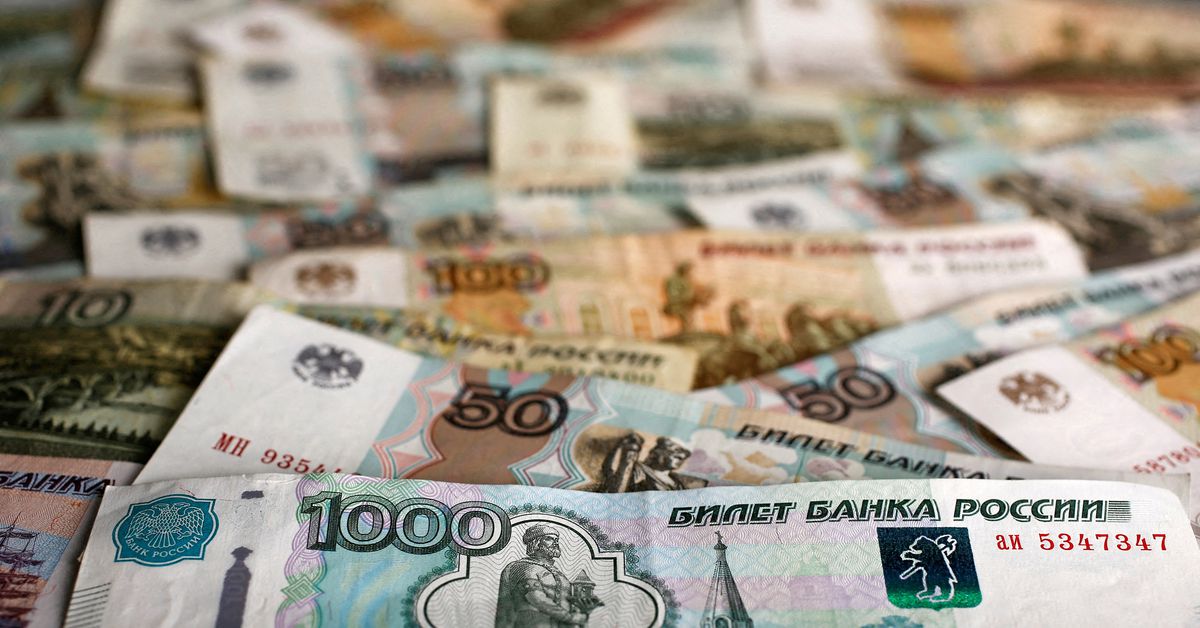 May 20 (Reuters) – The Russian ruble rallied to its strongest levels against the euro and dollar since June 2015 and March 2018 respectively on Friday, which analysts attributed to EU countries preparing to pay Russia for gas and to capital controls imposed by Moscow.

Russia said on Thursday that half of gas giant Gazprom’s 54 clients have opened accounts at Gazprombank, as European companies approach imminent deadlines to pay for their gas supplies. read more

Opening such accounts became possible after EU executives allowed member states to keep buying Russian gas without breaking the slew of sanctions they have collectively imposed on Russia over what Moscow calls its “special military operation” in Ukraine that started on Feb. 24.

One of the main reasons for the ruble rally is the switch to rubles from euros that will take place in European payments for Russian gas, said Yuri Popov, a strategist at SberCIB Investment Research, a unit of Russia’s No.1 lender Sberbank (SBER. MM).

The ruble has firmed around 30% to the dollar this year despite a full-scale economic crisis in Russia, making it the best-performing currency, albeit artificially supported by controls imposed in late February to shield Russia’s financial sector after it sent tens of thousands of troops into Ukraine.

The ruble is being partly driven by export-focused companies that are obliged to convert their foreign currency revenue after Western sanctions froze nearly half of Russia’s gold and forex reserves.

“Exporters are forced to sell (foreign currency) and there is no one to buy it,” a trader at an investment company in Moscow said.

Preparations for month-end taxes due next week have also boosted demand for rubles, while demand for dollars and euros remains low due to disrupted imports chains and restrictions on withdrawing foreign currency from bank accounts and moving it out of Russia.

“The key question is whether the central bank will step in as the excessive ruble firming is not in the finance ministry’s and budget ‘plans,” Evgeny Suvorov, an analyst at CentroCreditBank, said.

The central bank declined to comment on the ruble rate.

Outside the Moscow Exchange, the ruble remained much weaker. Sberbank was selling cash dollars for 68.83 rubles and euros for 71.24 rubles.

A stronger ruble will help put a brake on inflation and is beneficial for importers, but it hurts those who sell goods and services abroad for foreign currency, meaning reduced incomes for Russia’s export-dependent budget.

Analysts say Russian authorities are not interested in a substantial ruble strengthening from current levels and expect the currency to weaken by the end of the year.

In a sign that the authorities are ready to gradually lift capital controls, the central bank allowed banks to sell people’s foreign currency without any restrictions from May 20, with the exception of US dollars and euros.