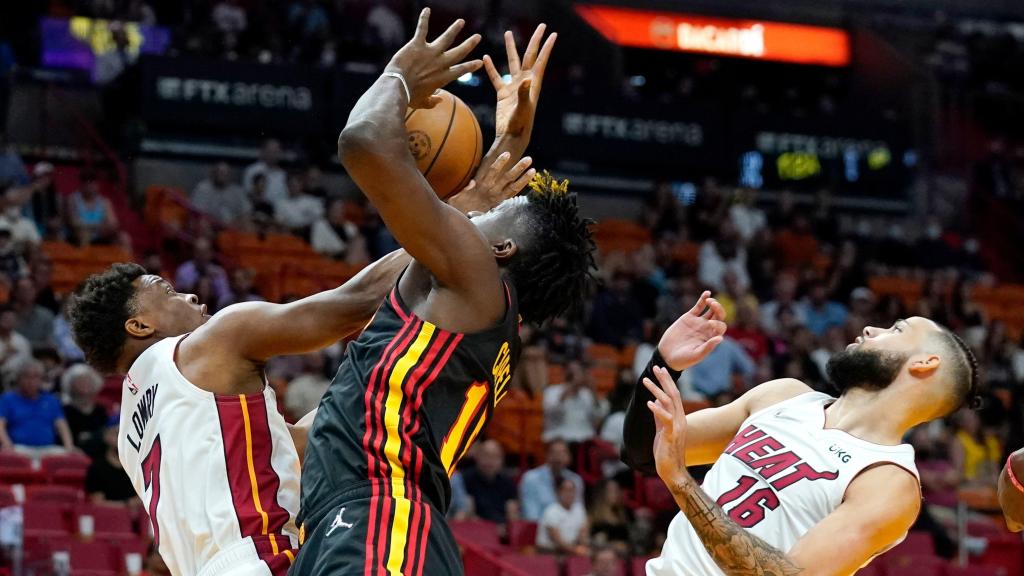 Observations and other notes of interest from Friday night’s 113-109 victory over the Atlanta Hawks:

– With the Heat not opening the playoffs until April 17, coach Erik Spoelstra said the decision was made earlier in the day to go with those available in the primary rotation.

– “It’s a little bit unusual because of the play-in, that we’ll have a little bit more time off,” Spoelstra said of the added round of the playoffs next week for seeds Nos. 7-10. “And everybody wanted to compete tonight.”

– Spoelstra added, “We will not play our first playoff game until the 17th. This is an opportunity to continue to compete and stay sharp. ”

– And for that matter, expect plenty of extra room for the few who travel on Saturday’s flight.

– For many of the Heat’s leading men, the regular season effectively ended with Friday’s game.

– But with this one played for keeps, it had Jimmy Butler, Bam Adebayo, Kyle Lowry and Max Strus in the starting lineup.

– Caleb Martin also started, in place of PJ Tucker, who is out with the calf strain suffered in Tuesday’s victory over the Hornets.

– Martin was one of five players who had been listed as questionable shortly before game time. All five were cleared to play: Martin, Dewayne Dedmon, Haywood Highsmith, Markieff Morris and Gabe Vincent.

– Omer Yurtseven was away from the team due to a non-COVID stomach illness.

– With Dedmon following in his typical role as first big man off the bench.

– Vincent then entered when Lowry was called for his second foul with 2:54 left in the opening period.

– That also is when Duncan Robinson entered, to make it nine deep for Spoelstra.

– So no Markieff Morris or Victor Oladipo in the primary rotation.

– They assuredly can get their chances on Sunday, should they so choose.

– But still appear, at best, to set up as playoff specialists.

– Butler’s third free-throw attempt moved him past Goran Dragic for 12th on the Heat all-time list.

– Lowry’s first steal moved him past Rickey Green for 69th on the NBA all-time list.

– Robinson’s fourth point moved him past Tyler Johnson for 25th on the Heat all-time list.

– With his eighth point, the Hawks’ Trae Young reached 2,100 for the season, becoming one of four players in franchise history to reach that mark in a season (Pete Maravich, Bob Pettit and Dominique Wilkins).

– He added, “There’s a system in place there, so it really does not matter, the five guys on the floor for them. They are gonna play the same way. ”

– McMillan essentially offered a pregame scouting report on the Heat, a team the Hawks could meet in the first round.

– “They force turnovers with their pressure,” he said. “They do a good job of switching, with Bam being able to guard one through five. So we have to make them defend. Get some ball movement. Be ready for their changing defenses. They will go from a press to a zone. ”

– Herro and Adebayo addressed the crowd pregame before the regular-season home finale, with Adebayo saying, “We appreciate you every night for showing up and being loud. Let’s get ready for the playoffs. Go Heat. ”

– The Heat opened the game with a pregame delay-of-game warning for too much hand slapping, not enough being ready.