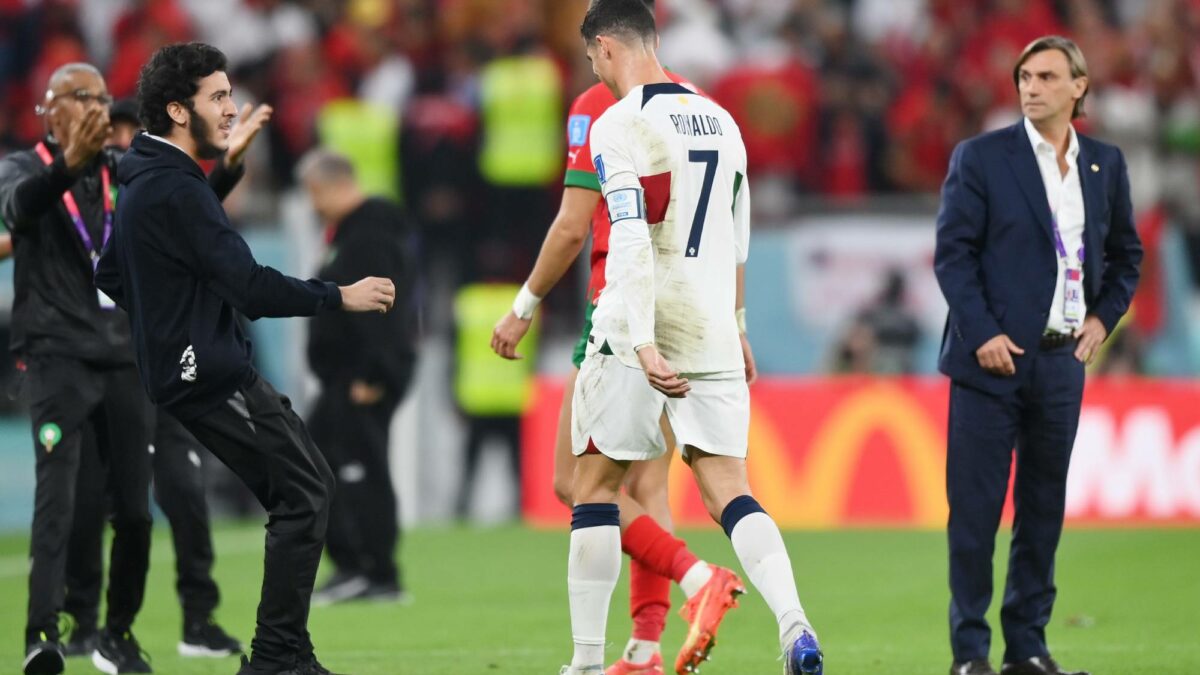 It’s been a dramatic morning, with Morocco becoming the first African team to make the World Cup semi-finals and France edging England.

Here’s all the latest news from the FIFA World Cup.

Fan thrown out for throwing water at Ronaldo, CR7 exits in tears

Cristiano Ronaldo’s World Cup is over in tears after Morocco spectacularly dumped Portugal out of the tournament 1-0.

CR7 was again relegated to the bench, but introduced early in the second half after Portugal fell behind. He briefly partnered his replacement, Goncalo Ramos, up top but neither were able to break through the stubborn resistance and, at the end of the game, Ronaldo was pictured tearfully departing down the tunnel.

His partner, Georgina Rodriguez, took aim at manager Fernando Santos on Instagram, slamming the decision to leave Ronaldo out from the start.

“Today your friend and coach decided wrong,” she wrote. “That friend for whom you have so many words of admiration and respect.

“The same one who, by getting you into the game, saw how everything changed, but it was too late. You cannot underestimate the best player in the world, his most powerful weapon.

“Nor can you stick up for someone who doesn’t deserve it. Life teaches us lessons. Today we have not lost, we have learned.”

He is unlikely to return for the 2026 World Cup in North America, bringing the curtain down on a career that has spanned five World Cups.

Prior to the game, a fan was ejected for throwing at the clubless star as he made his way to the bench. The man was seen to squeeze a bottle, ejecting its contents in the direction of Ronaldo, and was swiftly accosted by fellow fans and then kicked out by security.

Also likely playing his final international game was Pepe, the stalwart of the Portuguese defence for over a decade. He departed in anger, with his ire aimed at Argentinian referee Facundo Tello, especially in light of yesterday’s refereeing controversy in the Argentina-Netherlands fixture.

“It’s unacceptable for an Argentine referee to referee our game,” said the centre back on Portuguese TV.

“After what happened yesterday, with (Lionel) Messi talking, all of Argentina talking, and the referee comes here.

“What did we play in the second half? The goalkeeper dropped to the ground. There were only eight minutes of stoppage time. We worked hard and the referee (only added on) eight minutes.”

“We already know how it works,” said the Manchester United midfielder. “Before the game we already knew what we were in for, and what kind of referee we would find.

“I don’t know if they’re going to give the trophy to Argentina. I don’t care, I’m going to say what I think and screw them. It’s very weird that a ref officiates us from a country still in the competition.

“Clearly they’ve tilted the field against us. Unfortunately, in these competitions, where there are no Portuguese referees, there are referees from teams that are still in the competition.

“It seems strange to me, to say the least, but I don’t want to get into that, because that’s not the only reason we lost…We knew that we would play against much more than just Morocco.”

Neymar is struggling to accept he has become yesterday’s man at the Qatar World Cup, saying Brazil’s exit has left him “psychologically destroyed”.

Defeat on penalties to Croatia meant Brazil’s campaign was over, with the pre-tournament favourites falling to the shock finalists from four years ago.

This may have been Neymar’s final World Cup, and he was reluctant to commit to playing on for his country in the immediate aftermath of the game.

His dazzling goal gave Brazil the lead in extra time, but a late equaliser from Bruno Petkovic took the quarter-final to spot-kicks, and it was Zlatko Dalic’s side who got the better of Tite’s men.

In an Instagram post on Saturday (Sunday AEDT), Neymar wrote: “I’m psychologically destroyed. This was certainly the defeat that hurt me the most, which left me paralysed for 10 minutes and right after I couldn’t stop crying. It’s gonna hurt for a long time, unfortunately.”

Neymar’s strike meant the Paris Saint-Germain forward equalled Pele’s record of 77 goals for Brazil, but that was no consolation. He came to win a World Cup and may now never get his hands on that trophy.
“We fought until the end,” Neymar added.

“That’s what I’m proud of my teammates for, because there was no lack of commitment and dedication. This group deserved it, we deserved it, BRAZIL deserved it…”

“Thank you all for your support to our national team. Unfortunately it didn’t work out.”
Pele sent Neymar an impassioned and long message after the game, with the Brazil great attempting to rally the current generation while he is in hospital.

The 82-year-old again reacted on Saturday to Neymar’s latest message, telling him to “continue being an inspiration.”

Brazil have not reached a World Cup final since their 2002 triumph gave the Selecao a record fifth title.

FIFA President Gianni Infantino has conveyed his “sadness” over the death of Grant Wahl, a US journalist who was in Qatar covering the World Cup.

Wahl collapsed inside the Lusail Stadium while covering Argentina’s dramatic quarter-final penalty shootout triumph over Netherlands. The 48-year-old was then taken to hospital where he was pronounced dead.

“It is with disbelief and immense sadness that I have been made aware of the passing of renowned sports journalist Grant Wahl, whilst reporting on a quarter-final match during the FIFA World Cup in Qatar,” Infantino said in a statement.

“Only some days ago, Grant was recognised by FIFA and AIPS for his contribution to reporting on eight consecutive FIFA World Cups, and his career also included attendance at several FIFA Women’s World Cups, as well as a host of other international sporting events.

“His love for football was immense and his reporting will be missed by all who follow the global game. On behalf of FIFA and the football community, we express our sincerest condolences to his wife Céline, his family, and his friends at this most difficult time.”

The reporter was detained by security at the USA’s clash with Wales for wearing a rainbow shirt. His brother Eric, who is gay, alleged that Wahl was murdered. No cause of death has been determined but there has been no official recognition of possible foul play.