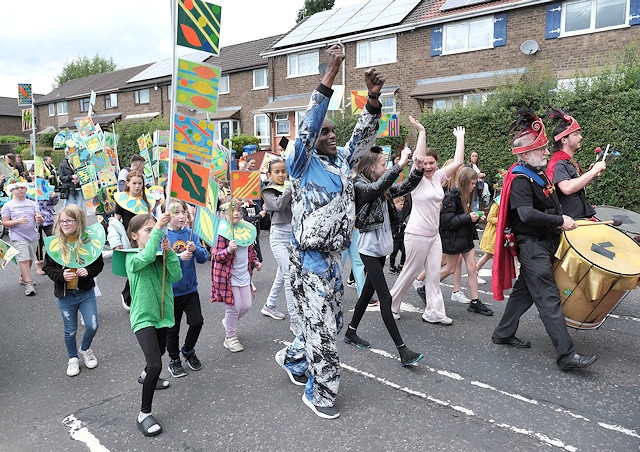 Over 2,000 people attended this year’s Darnhill Festival in Heywood on Saturday 2 July.

This year marked the festival’s return after a two-year absence due to Covid.

The theme for this year’s festival was ‘connections’, with a huge range of activities and performances promoting connection to each other, to stories, to play and to the earth.

This year’s celebrations opened with a parade through Darnhill, led by a brand-new banner created at the Community Café in Darnhill Library. The procession included local residents, Manchester School of Samba, clog dancers and folk musicians from Oakenhoof, circus performers from Skylight Circus Arts, and children from local schools with costumes, banners and decorations they’d spent the past few weeks creating for this year’s parade .

The Mayor of Rochdale Ali Ahmed opened the festival with a speech praising the resilience and vibrancy of the community in coming together to create and support the festival.

Poet John Lindley performed a new poem, part of Letters of Connection, a series of pieces commissioned specially for this year’s Festival.

This was written as part of a number of workshops with the neighborhood’s elderly community and then used as the basis for creative writing workshops in schools in the area. The resulting pieces written by local children were exhibited in the Festival’s Storytelling Tent for visitors to see.

There were also live performances from a raft of musical artists including the Flat Cap Three, Rubella and The Dave May Band.

One of the artists running workshops at the festival was Venessa Scott, a prolific public artist whose bright and bold works can be found across the north including MediaCity, HOME and Rochdale Canal among others. She is also known for her appearances on CBeebies where she can be seen helping young children discover and explore color thought art on the show Colors.

She has also been officially recognized as a Great Mancunian, putting her alongside the likes of Maxine Peake, Andy Burnham and others who have had a significant cultural and creative impact on the City of Manchester and its surrounding areas.

Cartwheel Arts Director, Hebe Reilly said: “It was wonderful to see Darnhill Festival return after being on hiatus for the past two years and it was particularly great to see locals come together in such strong numbers to celebrate.

Events like Darnhill Festival are important to their local communities, providing residents with the opportunity to get involved in artistic activities which they might not normally find on their doorstep. It also allows locals to meet and socialize with their neighbors, while also bringing people into the area, generating interest in Darnhill and footfall for local businesses.

“So it was great to be able to bring Darnhill Festival back for 2022 and for it to make such a big splash.”

Darnhill Festival takes place each year in Darnhill, Heywood. It is organized by Darnhill Festival Association with Cartwheel Arts and funded by Arts Council England. It is free to attend and all are welcome.