Robinhood’s revenue fell more than expected in the first quarter as the coronavirus pandemic retail trading fervor in meme stocks and cryptocurrencies lost steam in the wake of market uncertainty.

Revenues at the US retail brokerage dropped 43 per cent from a year ago to $ 299mn in the first quarter of 2022, shy of Wall Street estimates for $ 356mn, according to analysts polled by Refinitiv and below its own guidance.

The results came as retail brokerages that experienced a pandemic-driven boom have reported a pullback from retail investors compared to 2021. Uncertain markets, rising interest rates, lack of fiscal stimulus, return to pre-lockdown routines and inflation, which is squeezing households’ bottom lines, have contributed to investor reticence about investing.

“We’re seeing our customers affected by the macroeconomic environment, which is reflected in our results this quarter,” said Jason Warnick, chief financial officer.

The brokerage that helped to popularize zero-commission stock trading has struggled since its hotly anticipated initial public offering last summer. It has shed nearly 75 per cent of its value since its debut.

This week, Robinhood reported that it was laying off approximately 9 per cent of its total staff.

“When equities go up and money is easy, everything is great for brokerages,” said Dan Dolev, an analyst and managing director at Mizuho Securities. “But as soon as you’re in a bear market, people shy away, they close accounts.”

Robinhood grew rapidly over the past year, adding 10mn funded accounts to its platform in 2021 and doubling in size, with more than half of sign-ups from first-time investors. But it has struggled to maintain this growth, and has been slow to add additional products to its customer offerings, analysts said.

Robinhood’s main source of revenue, a controversial practice of selling customer trades known as payment for order flow, took a big hit in the first quarter. The company’s revenues from payment for order flow for the quarter fell 48 percent from the year prior to $ 218mn, and slowed from the previous quarter, when it made $ 264mn in transaction-based revenue.

The drop was led by a steep decline in revenue from trading equities, which fell 73 percent from the same quarter last year, to $ 36mn, and slid from $ 52mn in the previous quarter. Cryptocurrency transaction revenue dropped 39 per cent to $ 54mn in the first quarter.

In a call following the earnings release, the brokerage said retail customers have been more cautious given the complex economic environment, and customers with smaller balances had been trading less. It said it remained “focused on monetization” of its customers, especially from its more advanced traders. 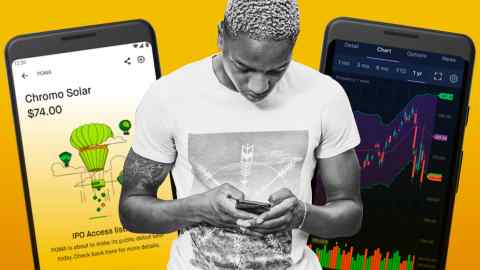 The broker is pinning expansion hopes on its crypto business, and last week agreed to buy UK crypto company Ziglu as part of this push beyond share trading, making a second attempt at cracking the British market after a canceled launch in 2020. The broker finished rolling out its crypto wallet feature to US customers this week.

Dolev noted that “Robinhood is just lapping the Covid extravaganza trading boom, they’re one year on from their toughest [comparison] ever. ”