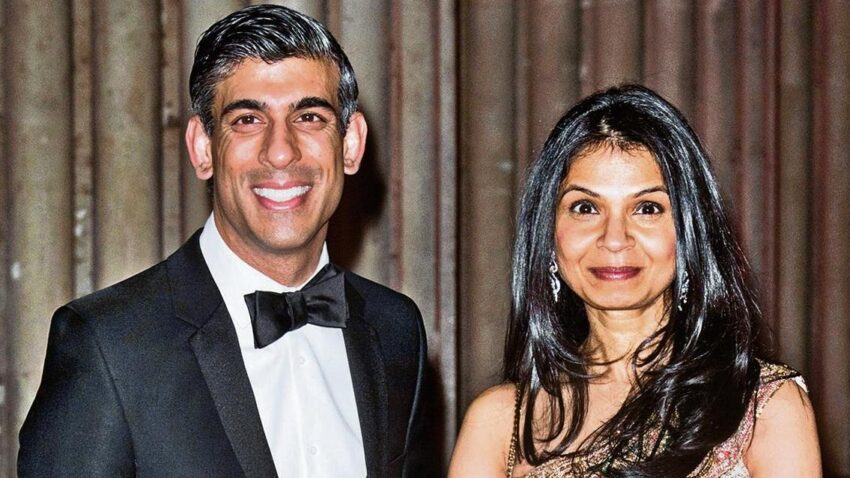 Rishi Sunak is facing questions about his wife’s financial affairs after it emerged that she is a “non-dom”, enabling her to earn money from abroad free of UK tax.

Akshata Murty holds non-domiciled tax status, designed for those whose permanent home is not in the UK. She lives in Downing Street with the chancellor. Murty, 42, the daughter of an Indian billionaire, said the status was owing to her Indian citizenship because the country does not allow its citizens to hold dual nationality. However, experts said there were ways for her to keep the citizenship but end her non-dom status.

Labor demanded to know whether the arrangement meant that the chancellor’s family had saved on their tax bill while he was increasing taxes. The disclosure came on the day that the national insurance rise came into effect and at a time of rising household bills.

Sunak and Murty married in 2009. Her father, NR Narayana Murthy, founded Infosys, an Indian technology giant that is listed in India and the US.

Forbes estimates that Murthy, 75, has a net worth of £ 3.4 billion. His daughter retains a 0.91 per cent stake in Infosys worth an estimated £ 690 million.

Murty would have received £ 11.6 million in dividends from Infosys in the past tax year. Her non-dom status means she would not have had to pay UK tax on the dividend at a rate of 38.1 per cent. Murty is understood to have paid foreign tax on all foreign earnings.

Sunak has bristled in recent weeks at scrutiny of his wife’s financial affairs. He said questions about her stake in Infosys, which had not then pulled out of Russia, were “very upsetting and wrong” because she was not “fair game”.

The chancellor’s popularity has collapsed since his spring statement on March 23, according to polling. He is less popular than Sir Keir Starmer after a 24-point drop in two weeks.

Tulip Siddiq, the shadow economic secretary to the Treasury, said the revelation about Murty’s non-dom status, first reported by The Independent, was “staggering”.

It is understood that Sunak declared his wife’s tax status to the Cabinet Office when he became a minister in 2018, and that the Treasury was also aware after he joined it, initially as chief secretary, in 2019. Murty has lived in the UK for nine years and will automatically be deemed domiciled after six more. A spokeswoman said: “She has always and will continue to pay UK taxes on all her UK income.”

Nimesh Shah, chief executive of the accounting firm Blick Rothenberg, said Murty’s non-dom status was a choice. “If you state in a tax return that your intention is to live in the UK and you’re not going to go back to your country of origin, you will be considered British for tax purposes and you’ll lose your domicile of origin, He said.

The Treasury said: “The prime minister’s independent adviser on ministerial interests has confirmed he is completely satisfied with the chancellor’s propriety of arrangements and that he has followed the ministerial code to the letter in his declaration of interests.”

Kwasi Kwarteng, the business secretary, told media that Murthy was the victim of malicious attacks.