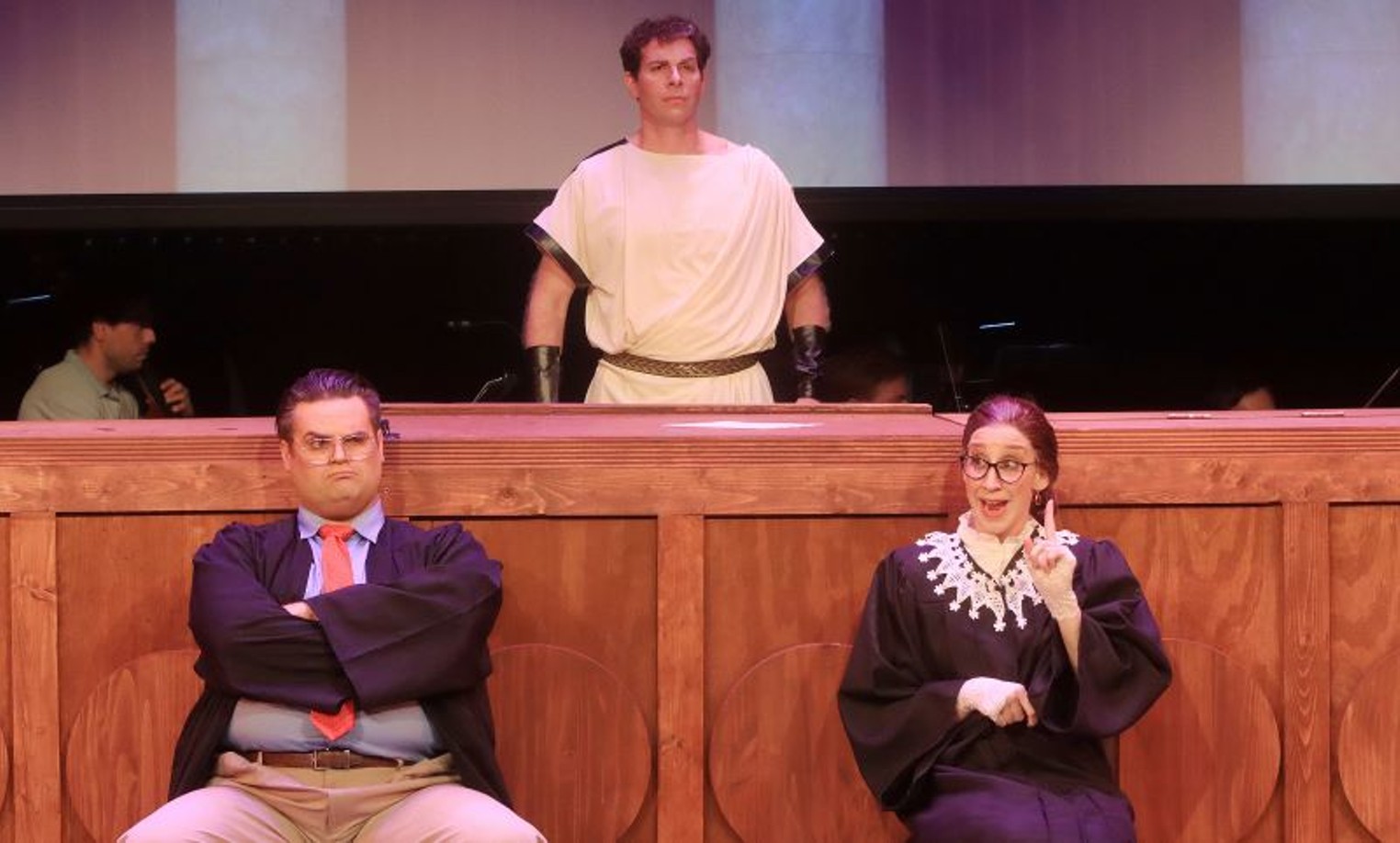 Supreme Court justices Antonin Scalia and Ruth Bader Ginsburg were polar opposites – in girth and height, in religion, in temperament, in their widely divergent opinions on the Constitution – but on one thing they agreed with a passion not seen on the court in decades, the opera.

They both adored and revered this singular art form and often attended performances together. They traveled on holiday together, partied together, dined together, and were fiercely protective of their own ideological views of jurisprudence. For years, they were Washington’s odd couple.

In our politically divided times with its noxious partisanship between blue and red, the Constitutional amendments teetering, and the Supreme Court threatened with packing, it is a cleansing blast of air to hear Opera in the Heights’ production of Derrick Wang’s beguiling chamber opera Scalia / Ginsburg (2015, revised after Scalia’s death in 2016.) This is ecumenical non-partisanship with intelligence, wit, verve, style, and an utter sweetness of purpose.

Composer / lyricist Derrick Wang might be the only lawyer turned composer in history. Vivaldi was an ordained priest, Borodin a chemist, Charles Ives an insurance salesman, Philip Glass a New York cabbie, Rimsky-Korsakov a music teacher. But I’ve yet to find a lawyer who’s made such a splash as Wang. He combines his prodigious talents of the law with music (he teaches at John Hopkins University in the Business of Music program) into this phantasmagorical paean to both The Law and The Opera. Since its premiere, his piece has played around the world to rapturous reviews, aired on PBS, and been featured on Live at Carnegie Hall. Scalia and Ginsburg wrote forewords to the libretto on its publication, and Ginsburg excepted part of it in her bio My Own Words.

There are catchy homages to classic operas throughout, a bit of Handel in Scalia’s florid opening aria where he chastises the progressives over his “originalist” views of the Constitution, some La Boheme when he remembers that old friends call him Nino, a bit of Mozart, some Verdi, a little tantalizing Bizet when Ginsburg taunts him, a lot of opera seria with the Narrator, the Commentator, with its shades of the stony Commendatore from Don Giovanni. These snatches waft through the music as if on a comic high, intruding just enough to catch our ear, then flying away when another quick theme passes through.

At opera’s mid-point, however, Wang settles down and writes in his own voice which is tuneful, jazzy, extremely pleasing, and surprisingly moving. Scalia’s remembrance of his father’s immigrant journey to the US and what he taught his son, “He Built Stairs,” is immensely moving, with antique movies of Ellis Island projected on the background screen, along with a sweeping flight of steps leading to a door that’s flung open. (Michael Baumgarten’s original projections, adapted here by director Josh Shaw, work with skill and taste.)

The final duet between Scalia and Ginsburg, “We are Different, We Are One,” is achingly emotional – like the best of any opera – summing up their loyal friendship despite their opposing views. There is such hope and love in it.

Scalia is being tried for his dissenting opinions. After that Handelian opening, the Mephistophelian Commentator appears in ancient Roman mufti to bring him to justice. Oh, dear, we think, is this another liberal screed where “notorious RBG” plays angel to Scalia’s devil with the work tipped in her favor? But Wang surprises with embracing equanimity – both are treated with respect, warts and all. It’s the friendship that prevails, that saves them both, that saves this opera.

Wang is a crafty musician, but he’s a craftier lyricist, summoning WS Gilbert from his Savoy Opera days with Arthur Sullivan. Wang’s never-ending rhymes cascade through his opera, always one step ahead of us, delightfully funny, boundless in invention, in perfect cadence. They’re in clever juxtaposition to his musical pastiche, adding the right amount of music hall to this jaunty, yet serious, work.

Tenor Dane Suarez looks perfect as rumpled, exasperated Scalia. Wang, like Verdi and Puccini, does not do him any favors, placing his vocal line high and loud, but Suarez climbs the pinnacles with strength to spare. He may be gruff, but as he says emphatically, I know I’m right. From the start, we like his passion and conviction.

Soprano Sydney Anderson is a picture-perfect Ginsburg, with that unique white lace collar and her hair pulled back into a tight bun. But she sings like Ginsburg could only hope to. Wang fashions her character with coloratura passages – a little Queen of the Night here, a bit of Traviata there – and a bluesy number that has her ripping off her judicial robes to reveal a red sequin cocktail dress as she plays the piano – with tip jar – as she exclaims the wonders of a living Constitution. Throughout, we’re on her side, too, another instance of Wang playing fair.

But the revelation of the evening is bass-baritone Tyler Putnam as the chasm-deep Commentator, who channels the tongue-tripping roles that Rossini, Mozart, and Handel laid out so forcefully. He sails through Wang’s treacherous tessitura, from high to ultra-low with astonishing finesse and vocal ease. It does not hurt that he possesses a magnetic stage presence. What a grand Mephistopheles he would make in Gounod’s Faust.

Opera in the Heights’ maestro Eiki Isomura leads his septet orchestra as if they were a philharmonic. There was triumph, passion, and playfulness. From such a small ensemble, the sound is rich and expansive. Director Shaw adds plenty of levity to the production and a comedic sense to his own set of designs. The solid bench of the court breaks into a piano bar with its own piano or an ingenious flight of stairs. Although staged in the intimate Holocaust Museum’s Herzstein Theater, the entire one-hour production is briskly paced by Shaw and, especially, Wang. They see to it that we never lose interest.

Who knew civics class could be so enjoyable, so musical, so endearing?

Unfortunately, Scalia / Ginsburg is scheduled for only one more performance. This is the final work of Opera in the Heights’ 2021/22 season, and the company’s next venue is yet to be announced, since it lost its cherished home on Heights Boulevard. If justice is blind, let’s hope this adventurous company finds a home quickly.

Scalia / Ginsburg continues at 2 pm Sunday, June 5 at Opera in the Heights at the Holocaust Museum, 5401 Caroline. For more information call 713-861-5303 or visit boxoffice@operaintheheights.org. Tickets include general admission, as well as access to the Notorious RBG: The Life and Times of Ruth Bader Ginsburg exhibition at the HMH, and complimentary parking.