Review: ‘Avatar: The Way of Water’ is a Must-See Cinematic Adventure

Review: ‘Avatar: The Way of Water’ is a Must-See Cinematic Adventure

James Cameron is arguably one of the most influential filmmakers in movie history. He’s also considered the sequel master – Aliens and Terminator 2: Judgment Day remain two of the best sequels ever made – and he’s one of the leading artists behind the technological evolution within this respective art, it would be absurd to not have Avatar: The Way of Water as one of your most anticipated films of the year. As a fan of the original, expectations for the continuation of the saga – which will have at least three more movies in addition to this one – were very high, and, for the most part, they were fulfilled… for better and for worse.

Regarding Avatar (2009): I don’t know the reasons behind the “popular to hate” and “does anyone care?” trend that emerged a few years ago. The truth is that I hadn’t reviewed the original for a long time, so I was curious to know how much my opinion had changed. After rewatching it the day before the sequel, I couldn’t have been more positively surprised. The visuals remain incredible even 13 years later. The score has never ceased to be memorably epic, and contrary to one of the points used to contest the film’s cultural impact, I remembered the story and characters perfectly.

Having written all this, The Way of Water lives up to my predictions. Technically, it’s practically impossible to point out any flaw. The same cannot be said about the sequel’s script, written by James Cameron, Rick Jaffa, and Amanda Silver. Do I consider this the typical case of “quality over substance”? No. There are easily distinguishable themes, clear intentions, and important messages to convey. However, the levels of creativity, innovation, and dedication are so high on the technical side that the story suffers in comparison.

It doesn’t matter much if I start with discussing the visuals, sound, score, or any other element of this type, as they all stand out in a truly spectacular manner. Curiously, the visual effects in The Way of Water have been the most complimented feature – and the reasons are more than valid, of course – but for me personally, the sound design & sound mixing deserve the same amount of praise, especially in the aquatic environment, that is, in the water or under it. The movie may be 95% CGI, but the sound work is so immersive that viewers will easily forget that they are, in fact, watching a film.

Whether it’s the water splashing against rocks, giant waves lapping, underwater animals communicating, characters spattering on the surface, or moving around in the water, the sound design detail is astonishing – certain moments seem like they’re straight out of the iconic Blue Planet docu-series. Simon Franglen’s score compliments the original, the late James Horner’s score for the first Avatar, keeping the melodies and classic notes that impacted me so much in 2009. It contains all the chill-inducing characteristics that a blockbuster of this dimension requires, elevating stunning shots and adrenaline-charged action set pieces. 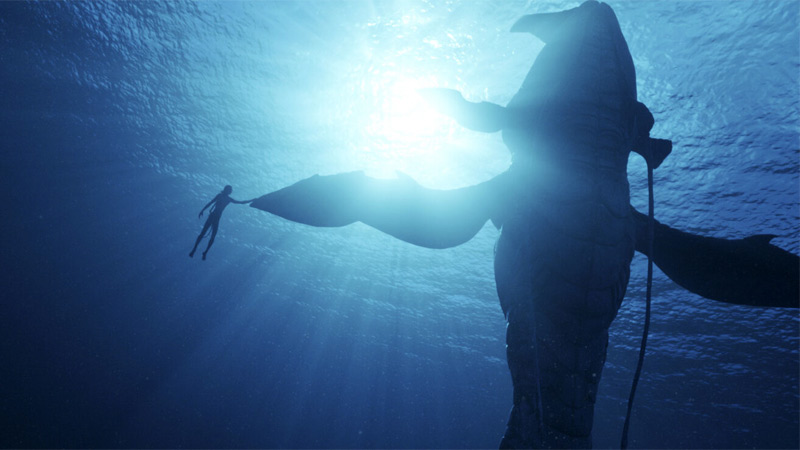 Of course, The Way of Water’s visuals are absolutely mesmerizing, too. The movie can be referenced as perfectly undeniable, incontestable proof that CGI can be an essential supplement in cinema and even the primary visual engine of an entire film. What Cameron has managed to create underwater is unbelievable, and it’s in this subaquatic environment that new technology and innovative filmmaking methods come into play. However, the Holy Grail is in the so-called “performance capture”.

As of this release, no other movie matches The Way of Water when it comes to capturing facial expressions in motion-capture renderings – which is saying a lot when Planet of the Apes and The Lord of the Rings did it so well, and the superhero genre constantly uses this technique as well. Contrary to what happens in other films, the simple fact that viewers are able to analyze the actors’ performances as if they were ordinary live-action interpretations is impressive in and of itself. Emotions are palpable through a mere look or posture in an incomparable manner to what Hollywood is producing elsewhere. The Oscar for Best Visual Effects is more than certain an well-deserved.

That said, The Way of Water is less impressive than the original work. In 2009, everything belonged to the “never seen before” category: the special use of 3D, the quality of CGI and performance capture, the creation of Pandora… every aspect of the first movie was shocking. Nothing left me in that state during the sequel, and I’m afraid the general audience might feel the same way. Is it visually striking? Undoubtedly. But not to the point of being a unique, unrepeatable experience. It’s “simply” a film with CGI prepared, tweaked, and tested over an entire decade, so obviously, it’s expected to look phenomenal.

The underwater sequences themselves will only truly impress more knowledgeable viewers, as without some research beforehand or acquaintance with what Cameron has brought new to the industry, this environment will just look like “great CGI”. Hence, I seriously disagree with the common go to line many journalists are using to try and get quoted: “The Way of Water surpasses the original in every way.” Any blockbuster of today has better visuals than most movies from decades past, so it’s unfair and even misleading to directly compare technical aspects individually and outside the context of the time of release, as this would mean that virtually all recent films are better than the originals.

In short, The Way of Water is a must-see movie on the biggest movie screen possible. It’s an experience that must be lived in a massive screening room with a giant screen, where the entertainment value increases tremendously. And don’t let the previous paragraphs deceive you: it’s one of the most visually immersive films of the century. To provoke such a feeling in the viewers, the cast is crucial. It’s hard to single out any one actor, however: Zoe Saldaña (Neytiri), Kate Winslet (Ronal), Sam Worthington (Jake Sully), and Sigourney Weaver (Kiri) all embody their characters superbly, with the first obliterating the others in terms of expressiveness and her emotional scale.

And it’s precisely in the characterization and development of each character that the movie shines, apart from all the technicalities. With the introduction of Jake and Neytiri’s children, The Way of Water could easily get lost with the amount of distinct, individual arcs. However, the concepts of family and parental protection are well explored through Jake and Neytiri’s uncertainty and fear, but also through Neteyam’s (Jamie Flatters) respect for this father, Lo’ak’s (Britain Dalton) search for validation, Tuk’s (Trinity Jo-Li Bliss) innocence, and Kiri’s spiritual connection to water. 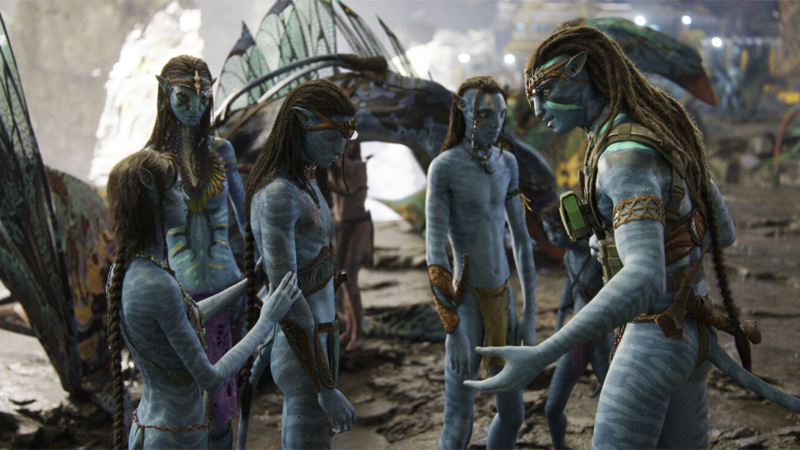 The Way of Water delves into some characters more than others, but all receive proper attention during the just-over-three-hours runtime – Neytiri is the only one who ends up, unfortunately, having less screentime compared to others, but the last act compensates for her somewhat strange absence during the second hour. Jake’s different treatment of his eldest son, compared to Lo’ak, is quite relatable, being the most captivating common storyline of the entire film. I was emotionally invested in the stories of each of the Sully family members throughout the entire movie.

The same cannot be said about Kiri’s arc, though. Honestly, while the character has a distinctive personality and, in many ways, is the film’s spiritual soul, The Way of Water uses her too much as an object whose purpose is to demonstrate the $400M budget to the audience. Surely, this wasn’t Cameron’s intention, but considering that weaknesses are presented and quickly forgotten, as well as a few other storytelling details, it seems that the filmmaker occasionally gets lost amidst his extreme commitment to the technical areas.

In the end, the main problem with The Way of Water is its central plot. In addition to some logical issues raised by some character decisions, the real obstacle is the predictability and repetition of generic narrative points. Cameron, Jaffa, and Silver recycle a lot from the original, borrowing its structure, antagonist, and even many of its themes. Stephen Lang returns as Colonel Miles Quaritch and even has an intriguing angle but one that falls into the usual developments without any unexpected turns.

Honestly, I believe this sequel serves more as a reminder than a true continuation of the story presented 13 years ago. An attempt to “test the waters” by putting the audience through a similar experience to convince studios that it’s really worth investing in such an expensive saga. This perspective is understandable, but it’s difficult to hide the partial disappointment felt when leaving The Way of Water without being astounded at any point throughout the entire narrative.

However, Cameron’s Avatar: The Way of Water is still efficient in everything it does. The story revolves around Jake wanting to protect his family at all costs, following a path filled with tough lessons to learn and complex obstacles to overcome. Running away from your problems is never the right decision, and the screenplay tackles this topic in many satisfying ways. A final remark on the action: while I prefer the third act of the original in this regard, the energy, stunt work, and overall effects of the various sequences offer some of the best entertainment you can witnesss all year. Impeccable work.

Avatar: The Way of Water clearly sets itself apart from many other blockbusters, building on 13 years of preparation to deliver a memorable CINEMA experience. A visually, technically breathtaking adventure, particularly in the truly stunning underwater sequences. The score remains epic, and the authentic dynamic between the members of the Sully family helps viewers to be emotionally invested in them. The entire cast’s performances, namely Zoe Saldaña, are vital for the film’s success. Too bad the recycled, generic narrative doesn’t keep up with the creativity, dedication, and innovation levels allocated to the technical elements. Underwhelming to the point of making the three-hour runtime feel heavier than it should, but for fans of the original – which remains supreme – it’s far from ruining one of the year’s must-see theater experiences.

The 27 best gifts for frequent travelers in 2022