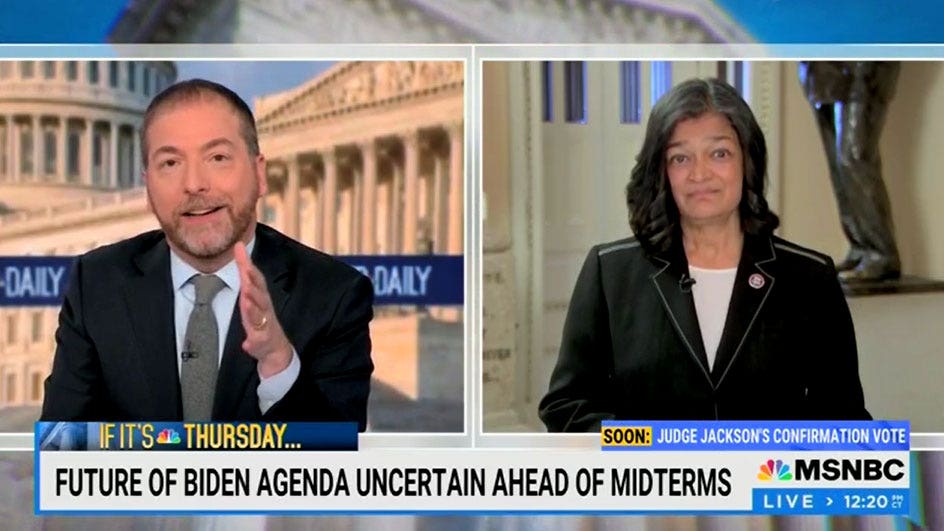 Chairwoman of the Congressional Progressive Caucus Rep. Pramila Jayapal, D-Wash., Called for the cancellation of all outstanding student debt Thursday, arguing it was “a racial justice issue,” while ignoring warnings that such an action would lead to dire consequences for the US economy.

During an appearance on MSNBC’s “MTP Daily,” the far-left congresswoman argued that canceling all student loan debt, public and private, would specifically benefit Black families by significantly raising their income, but that no means testing was necessary to determine an individual’s eligibility for federal government assistance.

She also argued that such a debt cancellation would “stimulate the economy,” despite warnings by the Committee for a Responsible Budget (CFRB) that it would increase inflation, cost the federal government $ 1.6 trillion, and put additional pressure on an already stretched-thin supply chain.

Host Chuck Todd began the discussion by asking Jayapal what agenda items President Biden and the Democrats should focus on ahead of the 2022 midterm elections and which one would be most viable.

Jayapal described a few options she felt the slim Democratic majorities in both houses could address, including action on climate change and tax reform, but argued student debt cancellation was an item Biden could address directly.

After noting that she and other progressives had been pushing Biden on the issue, Todd asked what sort of parameters would determine who was able to get their debt canceled.

“When I ran for Congress in 2016, student debt was at $ 1.3 trillion. Today student debt is at $ 1.9 trillion. A lot of this money is money that the federal government makes and that these debt collectors make on interest rates that are higher than what we actually need to be charging, “Jayapal said.

She claimed that if the objective was to get as many people as possible educated with the best qualifications, then forcing people to pay back their loans would amount to the country working against itself.

She then dismissed the idea that means testing to ensure an individual with certain qualifications before receiving that type of aid from the federal government was a necessary component, claiming it would just put barriers in the way and slow down the process of people receiving help.

“Sometimes we overthink this stuff in trying to parse it down, when the studies actually show that we would have a net economic benefit,” Jayapal claimed. “When you free up student debt payments for people, it’s not like they just stock away that money. They actually put it into buying cars, houses, whatever, so it stimulates the economy through their purchases.”

Todd did not push back on Jayapal despite studies showing the negative effects canceling student debt would have on the economy and that the government stimulating demand for purchases is part of what is driving current inflation.

According to the CFRB, canceling the debt could increase inflation as much as 0.5% over the already historic level seen since Biden took office, as well as leading to an economy unable to meet consumer demand.

It additionally warned that such a demand could lead to higher prices of goods and services and potentially decrease loan institutions’ sensitivity to high levels of debt, which could lead to further increasing the prices colleges and universities could charge to attend.