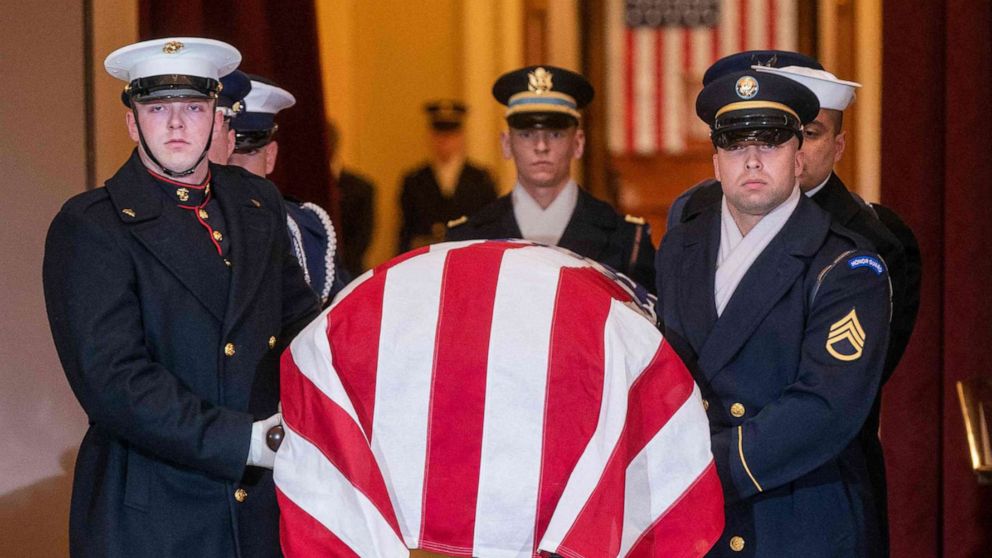 President Biden is expected to pay his respects on Tuesday afternoon.

The late Rep. Don Young of Alaska, the longest-serving Republican in the history of the House of Representatives, was remembered by Capitol Hill colleagues on Tuesday as his body lies in state at National Statuary Hall.

Young died at 88 on March 18 after losing consciousness on a flight to Seattle as he was heading back to Alaska with his wife, Anne, his office said. He is also survived by his two daughters, Joni and Dawn.

Young’s casket arrived on the Hill just before 11 am, and lawmakers, including Alaska Sens. Lisa Murkowski and Dan Sullivan, gathered nearby to watch the honor guard carry him up the east front steps. A small group of family, including his wife with her hand over her heart, waited near the top of the stairs for the arrival procession.

House Speaker Nancy Pelosi’s office said a formal ceremony will be open to the Young family and invited guests on Tuesday before all members of Congress are welcomed to visit Young as he lies in state, an honor reserved for the more revered Americans.

“Don’s legacy lives on in infrastructure projects he has delighted in steering across Alaska,” Biden said in a statement. “In the opportunities he advanced for his constituents. In the enhanced protections for Native tribes he championed. His legacy will continue in the America he loved.”

Young was one of 13 House Republicans to vote for Biden’s bipartisan infrastructure bill late last year.

Pelosi said in a statement that Young’s “reverence and devotion to the House shone through in everything he did,” calling him “an institution in the hallowed halls of Congress.”

Young, who was “dean of the House” when he died, was first elected to Congress in 1973. Reelected to his 25th term as Alaska’s only member of the House in 2020, he was known for a brusque style and for bringing federal investments home to Alaska.

He said in 2016: “I’ll defend my state to the dying breath, and I will always do that and they know that.”