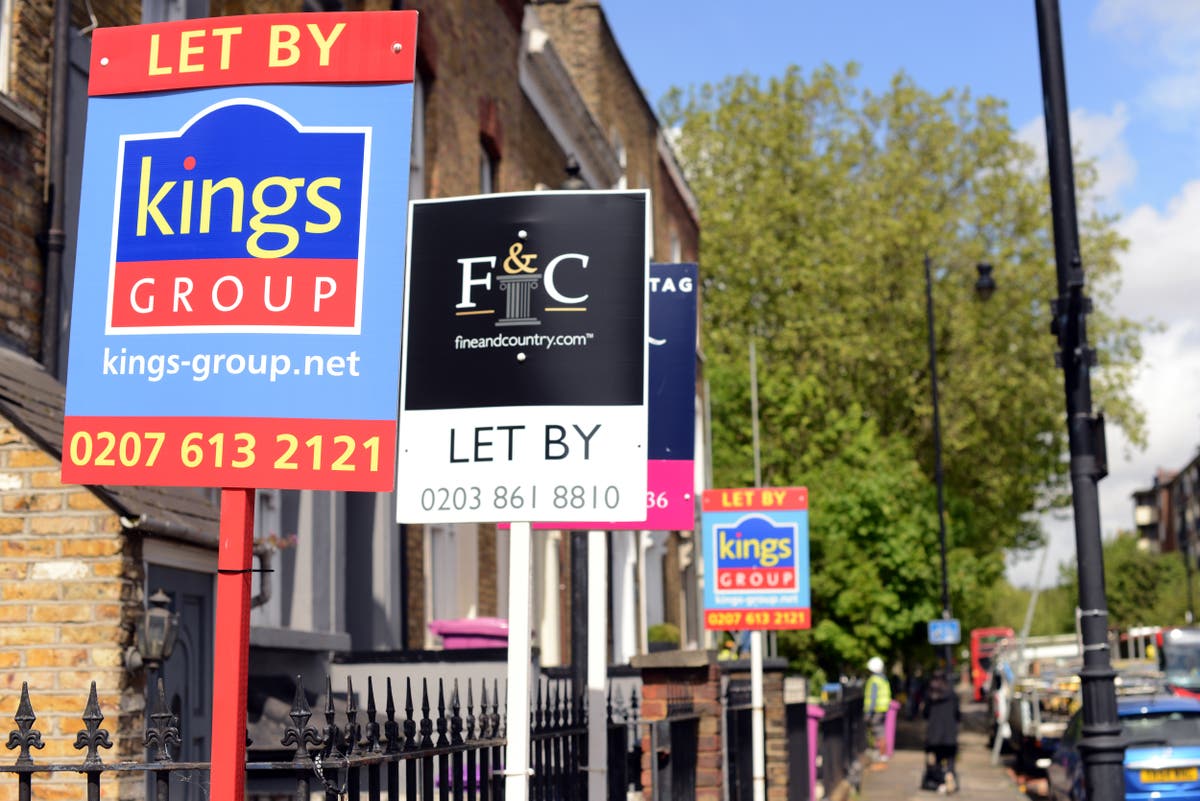 ondon rents have soared to a record high in a “drastic” new cost of living squeeze for hundreds of thousands of tenants, according to a new survey.

The average London monthly rent jumped 10.9 per cent last year to £ 2,142 sending them above pre-pandemic levels for the first time by the end of 2021.

Estate agents said red hot demand, as the economy opened up again after the easing of Covid restrictions last summer, combined with an acute shortage of new properties on the market have sent rents spiraling upwards.

The increases were biggest in inner London where they grew at 16.2 per cent over the year, according to data from property website Rightmove. The trend accelerated during the autumn with a 6.2 per cent jump in the last quarter alone – the highest for any region in the country.

The surge marks a dramatic turnaround from 2020 when London rents slumped during the first lockdown as many young tenants moved back to live with their parents or returned to their European home countries after Brexit.

The situation is so bad that one London agency Chestertons has taken the unusual step of writing to renters in Wandsworth to warn them that “2022 is shaping up to be the toughest year ever for tenants in London” and offering advice on steps “that could potentially save you money and a lot of stress. ”

Giles Milner, marketing director at Chestertons said the situation was “pretty drastic” and likely to get even worse this year.

He said tax changes that made buy to let purchases less attractive had reduced the flow of properties coming on to the market. He said: “This is not going to go away, we are not suddenly going to get an influx of rental properties. In some areas we’re renting places in three hours without people even seeing them. ”

Across the whole of the Wandsworth SW18 postcode Rightmove is currently advertising just 108 properties to rent where it might normally be expected to have as many as 350 available.

Rightmove’s director of property data Tim Bannister said that 2020 had been “defined by the race for space outside of cities, as tenant priorities changed and many moved further out looking for a larger property with green space, or temporarily moved back in with family.

“London was perhaps the biggest example of this, where landlords significantly decreased asking rents by the end of the year to encourage tenants to stay in the capital.”

But he added: “A year on, asking rents have finally risen beyond pre-pandemic levels, a sign that the capital has not lost its pull and popularity with renters as landlords look to renegotiate previous cut-price terms.

“Tenant demand continues to be really high entering the new year, meaning the imbalance between supply and demand is set to continue until more choice comes onto the market for tenants, which has led to our prediction of a further five per cent increase in average asking rents in 2022.

“Landlords understand the importance of having a good, long-term tenant, and there is a limit to what renters can afford to pay, which will prevent rents rising at the same rate we’ve seen over the past year.”

Dan Wilson Craw, deputy director of the campaign group Generation Rent, said: “We’ve seen this coming since most of the Covid restrictions were lifted last summer. People were encouraged to go back to the office, universities were encouraged to open up so we saw more people go back into cities.

“So there is a lot of demand for rentals and we have seen the number of properties dropping as a result. Obviously that’s a huge challenge if you’re having to move for whatever reason and keep finding yourself outbid by people who can afford more.

“In the short term it’s really hard to see how to overcome this. In London we would say that where homes are empty or let on Airbnb there needs to be more incentives to get them back into the long term housing market.

“We’ve also been calling on the Chancellor to withdraw mortgage interest tax relief on owners of holiday lets as they currently get favorable treatment compared to tenanted homes.”

The highest increase in competition has been for flats – which were previously out of favor during a lockdown “race for space” – with a 132 per cent rise followed by terraced houses (40 per cent) and semi-detached houses (30 per cent) .

So far this year Chestertons has registered 20 per cent more prospective tenants than the same period in 2021 and received 51 per cent more inquiries – but there are 67 per cent fewer rental properties on the market.

Richard Davies, head of lettings at Chestertons, said: “Many renters were able to secure a better-priced rental home during the pandemic and are keen to hold on to a good deal as long as possible. With fewer tenants willing to move, the number of properties coming back onto the market for rent, particularly at the more affordable end of the market, will equally decline. As such, tenants wanting to move this year may need to be willing to compromise or consider less central neighborhoods in order to secure a suitable property within their budget, ”

Marc von Grundherr, director of another London agency Benham and Reeves, said: “The London rental market is drastically different to that seen in 2020 when landlords were forced to heavily reduce asking rents to secure a tenant and avoid lengthy void periods due to an exodus of market activity from the capital.

“In fact, the surplus of available rental stock that accumulated due to the pandemic has now plummeted and this has been driven by a staggered return to the workplace and, in particular, a huge influx of demand from overseas students.

“We’ve also seen a huge increase in the number of tenancy renewals which have even exceeded 2019 levels and so while some areas are yet to see rental values ​​return to the pre-pandemic norm, it’s only a matter of time as the market looks set to continue to this strong return to form throughout 2022. ”