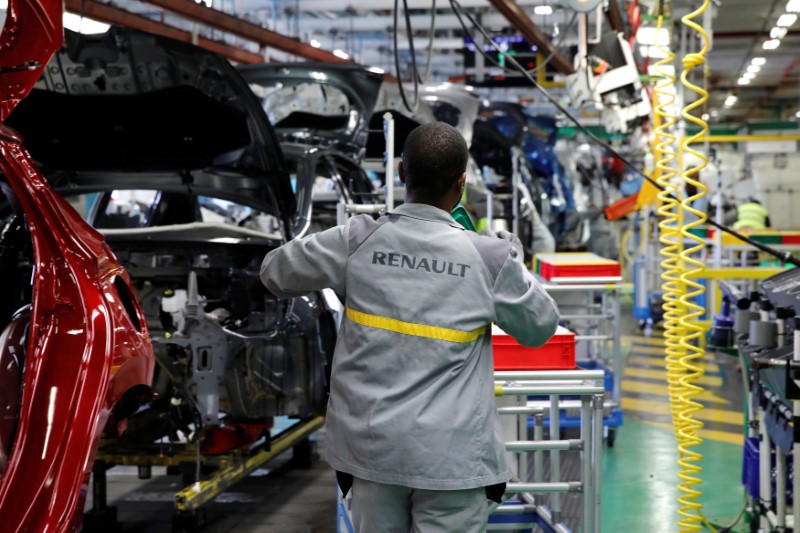 © Reuters. FILE PHOTO: The new Renault Megane E-Tech 100% Electric car is displayed ahead of the 2021 Munich Motor Show during a presentation in Aubervilliers near Paris, France, September 2, 2021. REUTERS / Eric Gaillard

PARIS (Reuters) -Renault shares fell early on Thursday after the French carmaker announced it was suspending operations at its plant in Moscow while Russian partner Avtovaz vowed to cut its reliance on imported components.

The Western carmaker most exposed to the Russian market, Renault said on Wednesday it would assess the value of assets affected by its decision later this year.

Renault also said it would assess its options regarding its majority stake in Avtovaz, Russia’s No. 1 carmaker.

Avtovaz said on Thursday it would manufacture new models with reduced exposure to imported components and do its best to restore supply chains.

“What we ask French companies is to apply the sanctions”, French government spokesman Gabriel Attal told RMC radio on Thursday, reiterating Paris’ position that it was up to businesses to decide on their presence in Russia. The government owns a 15% stake in Renault.

“We think this strategic move will shift the attention of investors into the core operations of Renault which have been largely restructured over the past years,” JP Morgan analysts said in a note.

Credit Suisse (SIX 🙂 in a note said that potentially exiting Russia for Renault would be a better option than taking a “wait and see” approach, even if it comes at a cost to the company.

Disclaimer: Fusion Media would like to remind you that the data contained in this website is not necessarily real-time nor accurate. All CFDs (stocks, indices, futures) and Forex prices are not provided by exchanges but rather by market makers, and so prices may not be accurate and may differ from the actual market price, meaning prices are indicative and not appropriate for trading purposes. Therefore Fusion Media doesn`t bear any responsibility for any trading losses you might incur as a result of using this data.

Fusion Media or anyone involved with Fusion Media will not accept any liability for loss or damage as a result of reliance on the information including data, quotes, charts and buy / sell signals contained within this website. Please be fully informed regarding the risks and costs associated with trading the financial markets, it is one of the riskiest investment forms possible.