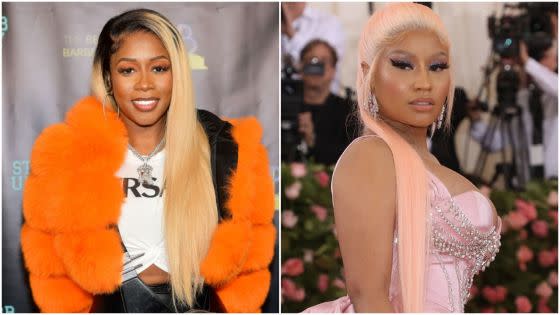 Since these two femcees traded these with each other, no one was expecting a Nicki Minaj and Remy Ma collaboration. Remy Ma recently clarified that a Minaj feature isn’t totally out of the question for her.

After being asked if she would ever work with Minaj, the Queens star did not say it would not happen.
“I do not have any issues with anybody,” she said with a smile. “I’ve been chillin.”

In 2017, this all started when the Terror Squad rep felt that Minaj threw jabs at her on the “Make Love” track when she rapped:

I’m the iPhone, you the Nokia
Everybody know you jealous
B **** it’s so clear… Oooohhh, you the qu-eee the queen of this here?
One platinum plaque. B **** where? … Y
You see, silly rabbit, to be the Queen of Rap you gotta sell records
You gotta get plaques.

In response, the Bronx spitter unleashed her fury on Minaj on her diss track ‘Shether.’ On the seven-minute song he rapped:

Been through mad crews, you disloyal hoochie
Now all of a sudden you back with Drake and Tunechi?
After he said you sucked his d ***, you back with Gucci?
Who next: Puff, Deb or Fendi? You are an A-list groupie
And to be the Queen of Rap, you gotta actually rap
The whole industry knows that your s *** is a wrap
No, to be the Queen of Rap, you can not have a ghostwriter
And that’s why this is my house; Flo Rida

During an appearance on The Wendy Williams Show, the Remy Ma explained why she was not too fond of Minaj. She mentioned that Minaj was “trying to keep [her] off of red carpets, trying to make sure awards do not go to [her]”And“ trying to make people make bad reports about [Plato O Plomo’s] album sales. ”

“This person, just based on what I’ve [been] witnessing, is not a nice person, ”she said.

Since Minaj recently buried the hatchet with the City Girls, maybe she and Remy Ma can do the same.

See what Remy Ma had to say below.