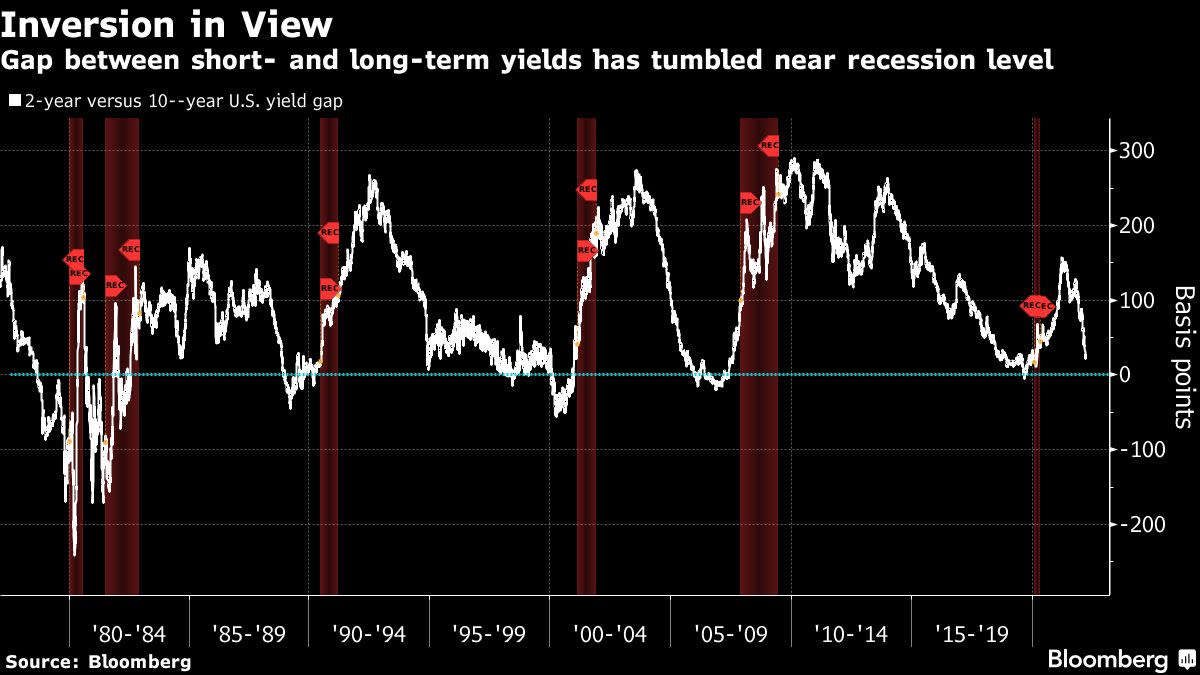 (Bloomberg) – Even after one of the worst starts to an equity trading year in history, the market upheaval might just be getting started.

Ominous signs are piling up that more turmoil is still coming, as key indicators point toward a potential recession. That could deepen the market route triggered by the Federal Reserve leading a hawkish shift among central banks and war in Ukraine.

The US Treasury yield curve has collapsed to near inversion – a situation when short-term rates exceed those with longer tenors, which has often preceded a downturn. In Europe, energy costs have climbed to unprecedented levels, as sanctions against Russia exacerbate a global commodity crunch.

“Over time, the three biggest factors that tend to drive the US economy into a recession are an inverted yield curve, some kind of commodity price shock or Fed tightening,” said Ed Clissold, chief US strategist at Ned Davis Research. “Right now, there appears to be potential for all three to happen at the same time.”

Food prices are already past levels that contributed to uprisings in the past, and the outbreak of a war between Russia and Ukraine – which combined account for 28% of global wheat exports and 16% of corn, according to UBS Global Wealth Management – only adds to risks.

Meanwhile, the Fed is unlikely to intervene to prevent sell-offs, according to George Saravelos, Deutsche Bank’s global head of currency research. That’s because the root cause of the current spike in inflation is a supply shock, rendering the playbook used to fight downturns for the past 30 years all but useless.

The probability of a US recession in the next year may be as high as 35%, according to economists at Goldman Sachs Group Inc., who cut the bank’s growth forecasts due to the soaring oil prices and the fallout from the war in Ukraine. Bank of America Corp. said the risk of an economic downturn is low for now, but higher next year.

With a sharp and widespread economic slowdown looming over the horizon, here’s a guide on how to prepare based on conversations and notes by fund managers and strategists.

While the year started with bullish bets on European stocks, that’s ancient history now. Record inflation, a surprisingly hawkish pivot by the European Central Bank and Vladimir Putin’s attack on Ukraine have changed everything, and a mass exodus from the region’s stocks is in full swing.

Strategists across asset classes see the Old Continent as the most exposed to risks stemming from the war, not least due to its geographical proximity and its energy dependence on Russia.

“For euro zone, there is a high probability of recession if the situation does not normalize quickly,” said Christophe Barraud, chief economist at Market Securities LLP in Paris. The risks include the confidence shock from the war, the hit to household consumption from higher food and energy prices, and the amplified supply chain disruptions caused by the conflict, he said.

The silver lining is that much of the bad news for Europe may now already be accounted for, revealing pockets of opportunity. Bank of America Corp. strategists lifted the region’s cyclical versus defensive stocks, as well as carmakers.

“The recent underperformance leaves them more realistically priced,” they said.

Miners and energy are the only sectors that have weathered the route in European equities so far, and that’s likely to continue – unless price rises destroy demand in the process.

“The energy sector in equities is one of the areas that provides shelter,” said Nannette Hechler-Fayd’herbe, global head of economics and research at Credit Suisse Group AG told Bloomberg TV. “In the best case, growth is picking up and energy is supported by that. In the worst case, it is prices that continue to increase and energy sector continues to be supported as well. ”

In the emerging landscape, the UK has been touted as a potential haven because of an abundance of commodity stocks in the FTSE 100 index. While MSCI’s benchmark of global stocks has slumped 11% this year, Britain’s large-cap gauge has lost a mere 3%.

Energy and materials firms, along with the traditionally-defensive sectors of health care and utilities, account for a combined 58% of the FTSE 100 – index members like Shell Plc and Glencore Plc have risen amid fears of a supply squeeze. The figure drops to about 31% for MSCI’s world benchmark.

Opaque industries such as agricultural chemicals are also doing well, and the ongoing tightness in fertilizer markets due to the war in Ukraine could bode well for companies like Yara International ASA, OCI NV, Mosaic Co. and Nutrien Ltd.

Food staples and retailing in the US have also historically outperformed during stagflationary periods, UBS strategists Nicolas Le Roux and Bhanu Baweja wrote in a note.

To be sure, not all yield-curve inversions, tightening cycles and commodity spikes lead to economic contractions. But the risks are there, and investors seeking to take cover should act – though it may already be too late.

By the time the National Bureau of Economic Research tells us we’re in a recession, “it’s the time to buy,” said Sam Stovall, chief investment strategist for CFRA.

And if you are unsure what to buy amid the market uncertainty, Greenmantle’s Dimitris Valatsas recommends a house.

“The historical evidence from the last global inflationary period during the 1970s is clear,” he said. “In real terms, across major economies, housing outperforms every other major asset class, including equities.”

But to keep a foothold in equity markets, it’s worth keeping an eye on purveyors of creature comforts and what people can not do without such as must-have technologies, like Microsoft Corp.