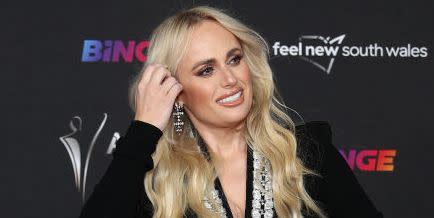 Rebel Wilson is turning heads once again – but this time it’s because fans are having trouble finding her in her own picture.

On February 15, the 41-year-old comedic actress shared a sweet moment she captured with her sisters Annachi Wilson spirit Liberty Wilson on Instagram. In a sunlit photo taken outdoors, the three siblings wore almost identical cat-eye sunnies while blowing kisses at the camera. Though they were not wearing the same outfit, all of them donned the same blonde hair. “Sister Time: The Wilson Sisters 💗💗💗,” Rebel captioned it.

Unsurprisingly, her fans flooded the adorable family picture with heart emojis, heart-eyed emojis and fire emojis. But there were others who could not help but wonder which Wilson sister was Rebel. That said, the confusion did not last long when folks took a closer look at the snap. (In case you need some help, Rebel’s on the left!)

After seeing the fun photograph, Rebel’s fans quickly went to the comments to point out how similar the trio looks. One person wrote: “Beautiful all of you ….. you’re all looking a like. Who’s the real Rebel? ❤️.” Another added: “If someone had to guess which one was you it would be hard if you did not really know. Love the photo. ❤️❤️.” A different fan said: “Triplets 😍😍😍.”

Rebel’s “Sister Time” post is not the first time that she has shared heartwarming family moments with her fans. The Pitch Perfect cast member posted beach photos in January with her sisters and niece on the social media app.

Rebel and her sister Annachi wore matching hot pink swimsuits that said, “Let’s Get Physical” on them. Meanwhile, sister Liberty wore a sweet “Mama” pink swimsuit and her daughter wore a matching one that said, “Got it from my mama.” Rebel captioned the cute pics: “The Wilson sisters for the WIN! 💗.”

Given that the actress appears to always have a busy schedule, we love seeing her still being able to find time to be with her family and create unforgettable memories. The Australian star is currently preparing to host the BAFTA awards this March and the release of her upcoming Netflix film Senior Year in May.

We have a feeling this is not the last we’ve seen of the Wilson “triplets.”