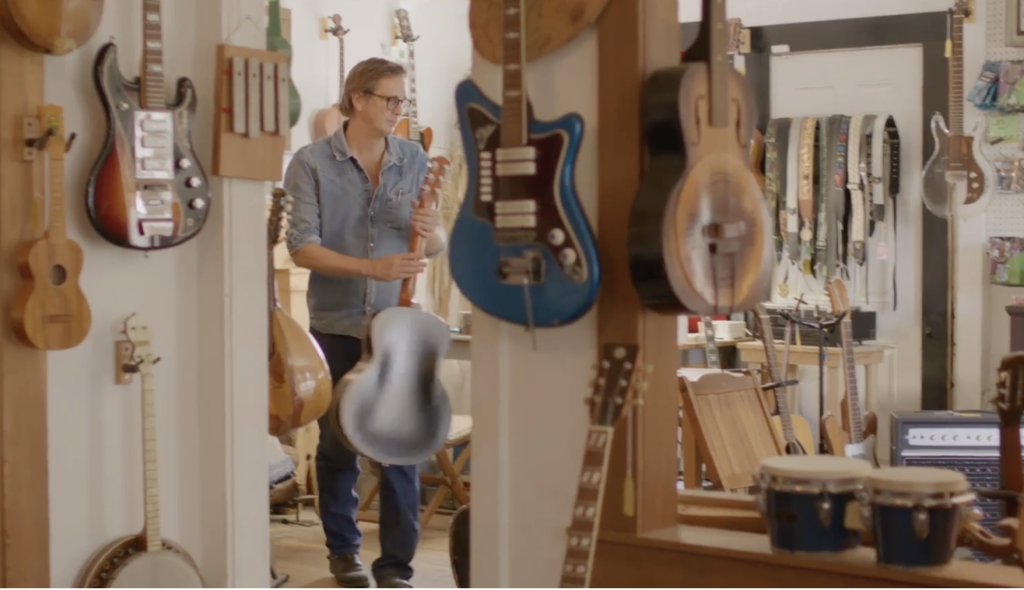 The joy of playing the guitar radiates from Really Good Rejects, Alice Gu’s SXSW documentary about Reuben Cox. Cox is a modern-day “luthier” – he makes stringed instruments, and his custom guitars grace stages all over the world. Artists clearly have a passion for his work: those lining up to praise him include Jackson Browne, Carrie Brownstein, Aaron Dessner of The National, Jim James of My Morning Jacket, Madison Cunningham, and Andrew Bird.

The film opens with a barrage of platitudes before introducing us to the man himself and settling into a calmer groove. Cox is a pleasant photographer who started making guitars out of reclaimed wood, from everything from an old cabin to a side table in his home – the latter to the chagrin of his wife, Miwa Okumura, who jokes about it in an interview here.

Dessner was one of the first to try the instruments out, and his friends in the biz soon followed suit. Cox then shares how he moved from New York to LA and set up shop, supplying a steady stream of talented eccentrics who flocked to his store for his distinctive rubber bridge guitars.

It’s a charming success story, although it stops short of being a rags to riches tale: this is open about the fact that Cox was photographing the likes of Paul McCartney when he moved into the trade, and that his wife Okumura works in the music industry .

The film moves into more thought-provoking territory when Guan begins to dig deeper with her interviewees. They talk of their childhoods; their first instrument; the escape they found in the strings from that day to now. The double meaning of the title becomes clear: not only does Cox make guitars out of vintage flea market instruments; but those who play them often felt like outsiders – talented folks who did not fit a conventional mold, but who radiate positivity (on camera, at least). They talk about music pulling them out of adolescent depressions and of finding an escape that was about creativity, rather than an addiction to content created by others.

While electric guitars are featured, many interviewees rock up with their own acoustics, reflecting the doc’s folksy, unplugged vibe. Watching them riff is a gift to music lovers, and their smiles are infectious. Says Gu, “I want audiences to be able to forget their worries for 90 minutes and lose themselves in the film, in the music, and to feel in touch with their humanness.” She has a good chance of succeeding – at least when it comes to audiences of really good rejects.