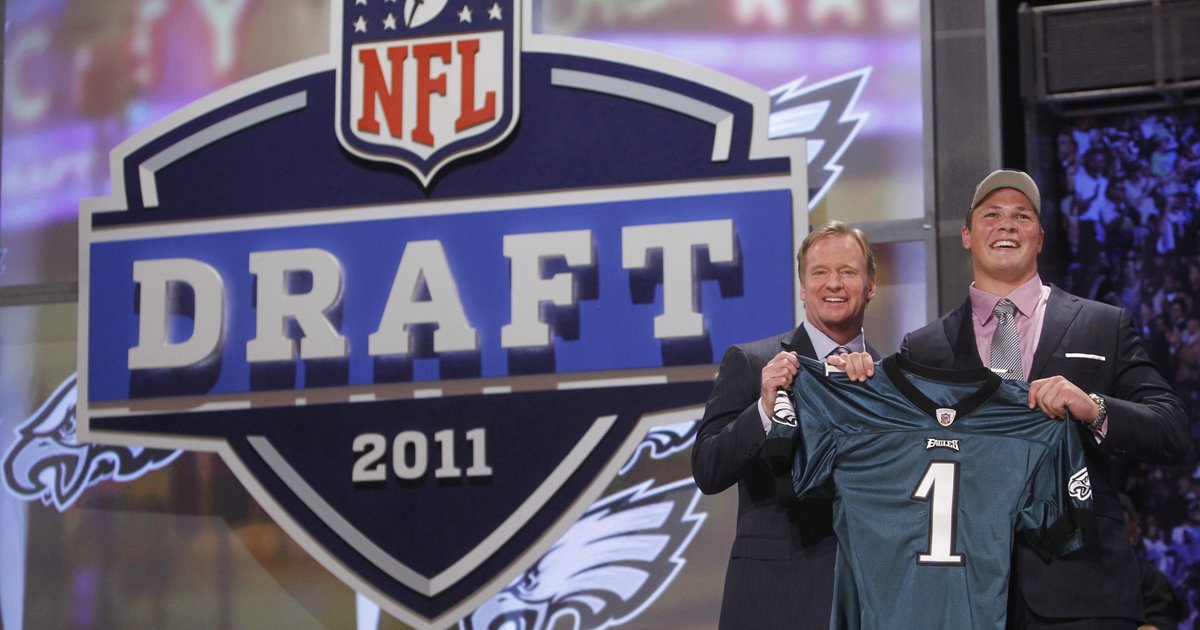 The Philadelphia Eagles have had mixed success in the NFL Draft, but have had some pretty bad selections sprinkled in over the last two decades. Today we’ll look at their 20 worst picks over the last 20 years. We’ll get to the 20 best picks at some point later this week.

1) 2011: Danny Watkins, OG, Baylor, 1st round: Watkins was already 26-years-old when the Eagles drafted him (he turned 27 during his rookie season) on a team at the time that was legendary for letting players walk once they got into their 30s. He was also transitioning from tackle to guard, a position he had never played.

As it turned out, Watkins was little more than a con man, who enjoyed cashing pay checks from the Eagles, but had little interest in being a football player, instead preferring to be a firefighter. Watkins played in just 26 ineffective games over his career, starting 18.

Watkins is now 37! He was selected in the same draft as Jason Kelce, and he last played in an NFL game (six snaps with the Dolphins) in 2013.

2) 2020: Jalen Reagor, WR, TCU, 1st round: Reagor was probably more of a second- or third-round prospect that the Eagles reached for because they felt they needed to add more speed to their offense. Worse, they selected Reagor over a clearly more talented receiver in Justin Jefferson, who some with the team perceived to be a high-volume slot receiver. Oops!

Sometimes in hindsight fans will look back at past drafts and say, “They should have taken (fill in stud player) instead of (fill in the bust the Eagles selected),” when it wasn’t exactly like they were ever pining for that stud player on draft day. In this case, criticism of the Eagles’ selection of Reagor over Jefferson was immediate.

3) 2014: Marcus Smith, OLB, Louisville, 1st round: In fairness, the Eagles did not really want Smith. They just sort of settled on him after the last of their six primary targets – Anthony Barr, Odell Beckham, Kyle Fuller, CJ Mosley, Brandin Cooks and Ha Ha Clinton-Dix – all went off the board before they were set to pick in the first round of the 2014 draft. Instead, the Eagles traded back four spots from 22 to 26, and took Smith.

Smith appeared in eight games as a rookie, and had no stats whatsoever. No tackles, no batted passes, no penalties. Nothing. He did not register his first tackle until Week 5 of his second season in the league.

During the 2017 offseason, after three awful seasons with the team, Smith hilariously skipped OTAs. He was released by the team soon after.

4) 2003: Jerome McDougle, DE, Miami, 1st round: McDougle got shot during the 2005 offseason, which led to the following hilarious Andy Reid press conference (in hindsight), as he went injury-by-injury, in alphabetical order, noting that McDougle got shot, as if it were like any other injury (full transcript here):

“Dirk Johnson had a sports hernia and had surgery on that. We expect him back no sooner than the first game. Jerome McDougle last night was shot in the abdominal region. Our doctors are in the process of talking to the doctors that worked on Jerome , and we’ll have more information for you later on that. He is in stable condition and seems to be doing well. JR Reed is making progress with the nerve in his foot … “

Anyway, many forgive McDougle’s career on the fact that he had been shot, but he still contributed next to nothing in the two years preceding that incident, other than this bone-crushing shot on Eli Manning:

McDougle finished his career with 37 tackles and 3 sacks.

5) 2019: Andre Dillard, OT, Washington State, 1st round: The Eagles selected Dillard to be the heir apparent to Jason Peters. Dillard was blessed with outstanding athleticism and footwork, but his fatal flaw in the NFL has been an inability to anchor against power.

After losing an extremely lopsided training camp battle for the starting LT job to Jordan Mailata in 2021, Dillard remains a backup, and one who has almost no versatility, as he can only play LT. In three seasons, one of which was lost to a torn biceps injury, Dillard has appeared in just nine games, with only six starts.

6) 2011: Jaiquawn Jarrett, S, Temple, 2nd round: The process of this pick is what made it so bad, less than the actual player. Jarrett was not good, of course, but the Eagles drafted solely for need in 2011, taking Watkins way earlier than he should have gone, and then severely over-drafting Jarrett as well. While the 2002 draft still serves as how a draft should be run (taking the best players available), the 2011 draft serves as the exact opposite (even if they were lucky to land Kelce in the sixth round).

In two seasons with the Eagles, Jarrett played in 13 games, and was released after the first game of his second season. Brutal. He had 17 tackles, and no other stats.

7) 2019: JJ Arcega-Whiteside, WR, Stanford, 2nd round: Arcega-Whiteside is not the receiver the Eagles hoped he would be (or anything close, for that matter) when they selected him in the second round of the 2019 NFL Draft. Arcega-Whiteside’s rookie season was marred by mistakes, most notably a drop that cost the Eagles a game against the Detroit Lions. He finished with 10 catches for 169 yards and a TD. In 2020, he was more of an afterthought, as he made four catches for 85 yards and no TDs. In 2021, he had 2 catches for 26 yards.

This year, JJAW is “moving” to tight end, which is pretty much what he was a season ago.

Like Reagor / Jefferson above, Arcega-Whiteside’s career will always be compared to DK Metcalf’s.

8) 2017: Sidney Jones, CB, Washington, 2nd round: The Eagles selected Jones in Round 2 after he tore an Achilles during his pro day workout. They were willing to redshirt him for a season on the premise that he was first-round type of talent.

Jones played in one game at the end of the season as a rookie, but was expected to produce thereafter. However, he struggled to stay on the field in his subsequent two full seasons with the Eagles, both during training camp and in the regular season. He flashed some ability at times, but was not worth the frustration. He did not make the team in his fourth season.

9) 2011: Alex Henery, K, Nebraska, 4th round: Never take kickers this early. They’re simply never worth it. Henery was a legend at Nebraska, but he had a noodle leg by NFL standards, and was rattled pretty quickly after a poor start to his career.

Also, fun fact: Henery was the subject of the first animated stick figure I ever attempted, after Cody Parkey beat him out in training camp. It was a beauty:

11) 2008: Jack Ikegwuonu, CB, Wisconsin, 4th round: Ikegwuonu was thought of as a “first-round talent” who fell because of a torn ACL and legal issues. The Eagles got cute and took him with 2009 and beyond in mind, but Ikegwuonu appeared in one game (no stats), and went to jail for armed robbery.

12) 2007: Tony Hunt, RB, Penn State, 3rd round: 14 career rushing attempts, 25 yards. Like Jarrett above, Hunt was released during his second season with the team.

13) 2008: Bryan Smith, DE, McNeese State, 3rd round: Smith was a third-round developmental pick. It’s probably just good practice not to take developmental players in the first three rounds, unless they really, really have a chance at being elite. Anyway, Smith did not develop, and did not even make the team in his second season with the Eagles.

14) 2011: Curtis Marsh, CB, Utah State, 3rd round: Marsh was a developmental pick. He, like Smith, did not develop. I remember when the Eagles and Patriots had joint practices before the 2014 season, and Tom Brady attacked Marsh unmercifully both during practice and in the ensuing preseason game. It was one of the rare times I actually felt bad for a player.

15) 2017: Donnel Pumphrey, RB, San Diego State, 4th round: In four years at SDSU, Pumphrey racked up a ridiculous 7,444 yards from scrimmage, making him one of the most productive running backs in NCAA history. However, at 5’8 “, 176 pounds, he had an extremely slight build, and not enough juice athletically to make up for that deficiency.

The selection of Pumphrey is further tainted by the fact that the 2017 NFL Draft was loaded with quality running backs. Pumphrey has never appeared in a regular season game.

16) 2006: Jeremy Bloom, WR / RS, Colorado, 5th round: The Eagles took the best skier in the history of the NFL Draft. Probably. Unfortunately, like Pumphrey above, he was never good enough at football to actually appear in a game in the NFL.

17) 2013: Matt Barkley, QB, USC, 4th round: Barkley was a high-profile player for four years at USC, and another four years before that at high school powerhouse Mater Dei. But after shoulder issues in college, Barkley never had the same arm strength again, which was obvious to anyone watching him in practice every day. It should have been equally obvious to anyone who worked him out prior to the 2013 NFL Draft.

Barkley did not handle arm strength criticism well, and his tenure with the Eagles ended after four regular season appearances and a 43.7 QB rating. He was traded to the Cardinals for a seventh-round pick.

Barkley is still in the league, on his 11th (!) Stop in the NFL as a marginal 53-man roster-worthy player. His playing career, so far:

18) 2019: Clayton Thorson, QB, Northwestern, 5th round: Thorson is one of the worst quarterbacks I’ve ever seen in an Eagles training camp. He was a fifth-round pick in a draft in which the Eagles only had five picks. You have to be especially bad in camp to not make the team under those circumstances.

20) 2005: Matt McCoy, LB, San Diego State, 2nd round: McCoy had a cool Brian Dawkins-style helmet, but he was a glorified special team who was over-drafted. To McCoy’s credit, he did stick in the league for seven seasons, but he lasted for just over two with the Eagles, as he was cut during the 2007 season after a game in which he flagged for a dumb personal foul penalty on a punter.

Honorable mention: 2012: Vinny Curry, DE, Marshall, 2nd round: To be clear, Curry was a perfectly fine NFL player, and a decade later he is still in the NFL. Curry’s name should not be on this list among these other busts. He carved out a very successful NFL career, and even won a ring in Philly.

So why the honorable mention? The Eagles have always lamented that they did not select Russell Wilson in the 2012 draft. If they loved him so much, why did not they just take him instead of Curry, especially when they had two second-round picks that year!

They drafted Nick Foles in the third round instead, so it was not all bad, I guess.